This Day in History: Is Batman Still Dead?

Oh, 2010. How good we had it at the time. Booster Gold appeared regularly in his own title, Justice League: Generation Lost, and Time Masters: Vanishing Point, the first issue of which was released 4 years ago today. 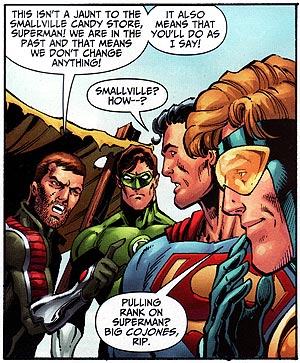 Four years later, we still don't know who Rip Hunter's mother is. (Or for that matter who the Black Beetle was.) They say time heals all wounds, but that healing leaves some notable scars.

Just for kicks, I thought that I'd compare the sales for Booster Gold's three 2010 series: Booster Gold, Justice League: Generation Lost, and Time Masters: Vanishing Point. While I knew what the the sales numbers were, it's kind of surprising to see them stacked against each other. 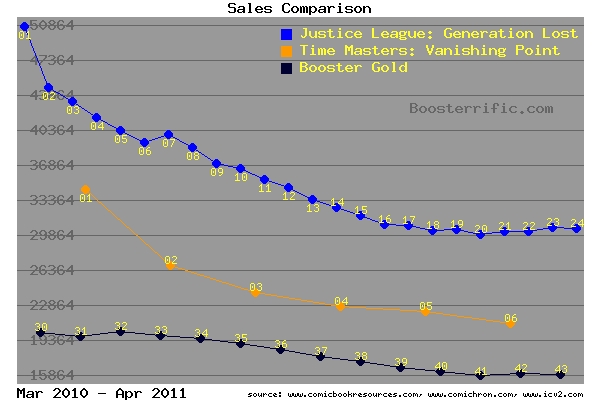 Booster Gold was the only ongoing series of the three and was also consistently the worst seller of the bunch. Time Masters did only marginally better, despite featuring Batman, Superman, and Green Lantern, three of DC's biggest sellers on a monthly basis. The best seller was a book comprised primarily of characters who have repeatedly proven themselves incapable of sustaining enough fan interest to maintain individual series.

I know that there were more factors at play than just characters (cost, tie-in, promotion, creative teams, etc.), but it would seem that the ensemble cast approach really works.

This week the only Booster Gold you're likely to see is in the Time Masters: Vanishing Point collected trade. If you passed on individual Time Masters issues waiting on the trade, now's your chance. And you're in luck: the trade is advertised at $14.99. If you bought the 6 individual issues, you spent $23.94 for 138 pages of story (including covers, excluding variant covers). Considering that the trade is advertised at 144 pages, it appears that good things do come to those who wait. Buy it and make Skeets happy.

SuperPat posted on Apr. 6, 2011 at 11:44 AM
Booster and Skeets appear in this week's Justice League of America 80 Page Giant. Unexpected surprise!

Morgenstern posted on Apr. 6, 2011 at 2:59 PM
Where does the difference in pages come from? More ads? Or actual new panels?

Also, if you want to say yourself some money to buy more Booster stuff, wait a week and get it off Amazon for just under 10 dollars. Combined it with Booster Gold coming out on the 19th and Generation Lost, and you can save almost 20-30 dollars.

Boosterrific [Official Comment] posted on Apr. 6, 2011 at 10:09 PM
As I noted in the post above, I had included the mini-series 6 covers in my 138 page count. But I have now laid hands on the TPB at my LCS, and I can confirm that the 6 page difference is house ads and title/legal pages. There is no bonus content in the TPB. (But you are saving $9 off the mini-series cover price, so that should probably be considered a bonus.)

Could this be the day that finally sees the release of Time Masters: Vanishing Point #6, the long-awaited, rumored kick-off to "Flashpoint"? I'll believe it when I see it. If it does turn up on your Local Comic Shop, buy it and make Skeets happy.

ncllcn posted on Feb. 2, 2011 at 1:36 PM
my comic book sore is closed today due to the weather... damn blizzard followed by an ice storm and now it's snowing again

"Supernova and his wife will be addressed next issue." -- Dan Jurgens

I know that I can't wait.

Morgenstern posted on Dec. 28, 2010 at 8:19 PM
This gives me confidence that my theory regarding Supernova's Identidy is true...(do theories based on already released issues count as spoilers?)
And another question...did the "general Superhero community" ever learn who Supernova was during 52? And what the deal was behind Booster's "death"?

Boosterrific [Official Comment] posted on Dec. 28, 2010 at 11:39 PM
So far as I am aware, Booster's role in the creation of the 52-verse is not public knowledge. Early in the current BOOSTER GOLD series reporter Rose Levin learned that Daniel Carter was Supernova, but whether she has shared this info with the public is unknown.