Only Thirty Dollars an Issue

Last week in his interview with Vaneta Rogers for Newsarama.com, Dan Jurgens said

Tell DC Co-Publisher Dan DiDio you'll buy 10 copies each of every issue and that all your friends will do the same and you'll have a Booster Gold series in no time.

DC Comics has been as good as their word since promising to "Hold the Line at $2.99" in 2011. Therefore, you could expect to grab 10 copies of a new Booster Gold comic for $30 (plus tax). Maybe less, if your Local Comic Shop offers subscriber discounts, as many do. I know a lot of people who spend much more than that on comics every week!

So to make it easy for you to send the word to Dan DiDio that Booster Gold fans are willing to celebrate the Capitalist system for which Booster Gold stands, I've made this handy postcard: 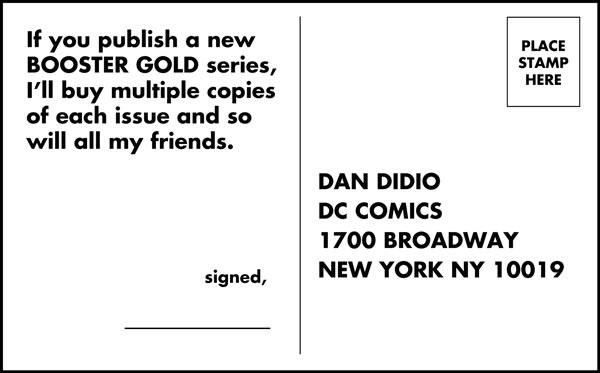 Just download the PDF, print it out, sign your name, affix a stamp, drop it in the mail, and start a savings account for the day when Dan DiDio takes us up on our offer!

Wow! When Vaneta Rogers interviewed Dan Jurgens for Newsarama.com on Monday, she covered the bases!

Newsarama: Dan, who is the star of the Convergence: Booster Gold issues? Is it New 52 Booster Gold, or the older Booster?

Dan Jurgens: The only thing better than one Booster is two Boosters! You'll see both of them here.

Nrama: So does this pick up where we left off in the Futures End: Booster Gold issue from September? Or how does it relate to what we saw in that issue?

Jurgens: Yeah, it picks up not long after the Futures End: Booster Gold issue. They're directly plugged into what's happening here, so it was a natural story progression.

Those are just the first two questions. Rogers goes on to cover what other characters will be appearing in the mini-series, how it ends, and where we might see Booster Gold next. It's far more informative than a typical DC solicitation.

Read the whole interview at Newsarama.com!

The fans have spoken! You like to see Booster Gold realizing his true potential. (Everybody enjoys a success story.)

Last week's poll question: Which is the quintessential incarnation of Booster Gold? (61 votes)

Yesterday, Convergence: Justice League International writer Ron Marz told Newsarama's Vaneta Rogers that Booster would be playing "a pivotal role in Convergence as a whole." What do you think that means? (You can read the whole Marz interview at Newsarama.com.)

Tinuvial posted on Feb. 12, 2015 at 11:15 PM
Call me cynical...whenever they start throwing around words like: critical, pivotal, or essential, it sends up a few red flags for me. Would love to be proven wrong...but! Actions, not words DC.

Believe it or not, the last time I ran a post about a new Russ Burlingame "Gold Exchange" column was July 12... 2013! Thankfully, Russ hasn't forgotten us Booster Gold fans. Russ put the hard questions about Booster Gold: Futures End #1 to Dan Jurgens earlier this week:

Burlingame: So, if you can say...how many Boosters are there in the DC Universe at the moment?

That's pretty clear! Except, how did "our" Booster end up wearing New 52 A.R.G.U.S. armor? And which Booster was in All-Star Western? And what really happened at the end of Booster Gold #47? Okay, so maybe not as clear as I was hoping. Maybe Jurgens was a little more expansive when he spoke to Vaneta Rogers yesterday:

Rogers: Anything you can say about the next time we see Booster?

Jurgens: Unfortunately, I can't. But there's obviously more to come. It certainly safe to say that there are all sorts of elements in the Booster Gold: Futures End issue that hint at a lot of big stuff looming right around the corner.

Well, that only opens more questions. What does "right around the corner" mean? April? It took 2 years to touch on the events in JLI Annual, and none of that is remotely resolved yet. Not a great precedent.

I recommend that you read the rest of the interviews (Burlingame at ComicBook.com and Rogers at Newasarma.com) and draw your own conclusions.

Boosterrific [Official Comment] posted on Oct. 3, 2014 at 4:17 PM
You can argue that A.R.G.U.S. somehow exists in the pre-FLASHPOINT universe, but you can't argue that it's not A.R.G.U.S. armor.

Remember last month when Bleeding Cool told us that Booster Gold and Blue Beetle would be turning up in Justice League 3000 #12? Well, Vaneta Rogers and Newsarama.com finally confirmed it at 10AM this morning.

Newsarama: Keith, we've been hearing that issue #12 has some new characters that people should be happy to see. And now that issue #12 is about to be solicited, are you ready to reveal who's coming to Justice League 3000?

Keith Giffen: Yes! Booster Gold and Blue Beetle are coming to Justice League 3000, as of issue #12.

I'm not going to keep this a secret anymore. I mean, if Beetle and Booster are coming back, we should scream it from the rooftops, right? Maybe more people will buy it who are Beetle and Booster fans, and not be surprised and miss the issue. So I'm not really big on hiding stuff anymore.

O frabjous day! I'm already reserving a place in line to buy Justice League 3000 #12 when it hits stands in December.

I know that many fans weaned on the Johns/Katz volume of Booster Gold don't care for Giffen/DeMatteis' take, and that's okay. However, even the news that Justice League 3000 takes place in an alternate universe free from the shenanigans of the New 52 fills me with unbridled glee.

This revelation means that despite all of DC's posturing in recent years over the inviolability of the New 52, the multiverse — or hypertime or elseworlds or whatever you want to call it — is alive and well and somewhere the "real" Justice League International continues its never-ending battle for truth, justice, and a little bit of respect! Somewhere, Wally West is still the Fastest Man Alive and Captain Atom isn't Dr. Manhattan.

It also means that somewhere, Michelle, Rani, and Rip Hunter are running from rampaging dinosaurs, and that the Black Beetle and Rex Hunter could return to take their revenge on Booster Gold's wife. What's not to love?

For complete details, I recommend that you read the rest of the article at Newsarama.com.

Ryan posted on Sep. 14, 2014 at 11:54 AM
This will be fun! I loved how Giffen handled booster in volume2, I realize this is going back to JLI version, but that will still be fun! More booster is good! sounds like they will be a regular in the series,, yes? I cant find him saying they will be in anything more than issue 12.

Brady Kj posted on Sep. 16, 2014 at 7:36 PM
Giffen's version is pretty good. I'm excited. DC seems to have decided a few months ago to start publishing good comics again, and see if that's as profitable as bad ones.