Max Lord is the big "winner" receiving a clear majority of the vote, so I feel comfortable declaring him Booster Gold's arch nemesis, Rebirth continuity be damned!

Last week's poll question: Which villain do you consider to be Booster Gold's arch-enemy? (47 votes)

(If you voted "someone else," who did you have in mind? Dirk Davis?)

While we're on the subject of villains, someone has been making Booster Gold's life miserable recently in the pages of Heroes in Crisis. (We all agree Booster is innocent, right? Right.) The identity of the real culprit has been the subject of much debate recently as the series nears its halfway point.

One popular Internet theory is that the real villain is Skeets. This is mostly based on one panel in Batman #50 that remains unexplained. The link between these two stories is writer Tom King. Could he have been dropping Heroes in Crisis clues in Batman? I doubt it. I just can't believe that he'd crib so blatantly from 52.

The manager of my Local Comic Shop thinks that the mastermind behind the murders is Psycho Pirate. For those who don't know, Psycho Pirate — a character with key ties to the biggest crisis, Crisis on Infinite Earths — has the ability to manipulate emotions, a power that fits well into a story advertised as being about Post Traumatic Stress Disorder. (For what it's worth, PP is also in the aforementioned panel with Skeets in Batman #50. But then so was the Joker. Joker can't be behind all this, can he?)

Personally, I've decided that there aren't really any murders in Heroes in Crisis. I think it's all just one ongoing computer simulation designed to.... Well, I'm not sure what it's designed to do. Unfortunately, no one can be told what the matrix is. We'll all have to see it for ourselves.

If you need some evidence to support your pet theory, Vaneta Rogers put together a list of the clues at Newsarama.com. Take a look and see if you can't solve these crimes before Booster Gold does.

Boosterrific [Official Comment] posted on Jan. 11, 2019 at 3:54 PM
Ooh! He should have been one of the possibilities. I just had to get down to 6 options, and I assumed he'd get the fewest votes because of his association with Captain Marvel. But he certainly deserves consideration.

Steven Palchinski posted on Jan. 12, 2019 at 9:37 PM
Yeah, since my real introduction to Booster was Infinite Crisis and 52 (I was late to the party, only started collecting comics in my late teens in the early 2000's) and that Mr Mind reveal hooked me.

DC has finally confirmed the artist for Action Comics #993 . . . and it's exactly who we thought it would be.

Nrama: Where the heck has Booster been?

Jurgens: Surfing the time stream. Like that wouldn't be enough to keep him busy?

Nrama: Good point. OK, so what's Booster's role in the story with Superman?

Jurgens: If Superman is going back to the moment of Krypton's destruction (which he is), he's putting himself in a very precarious position. What happens if he’s stuck on Krypton when the planet blows? How would that change time? Because of that, Booster gets involved.

Nrama: You're getting to draw the covers for the Booster storyline. What's it been like penciling Superman and Booster Gold again with this run?

Jurgens: It's taxing, as I'm still writing a lot of stuff as well, but it's been fun to come back for the covers. I’m also drawing two issues, #993 and #994, which is also a lot of fun! I really wish I had more time to draw.

So now we have an extra reason to buy "Booster Shot." (As if we needed one!) "Booster Shot" starts in Action Comics #993, coming to a Local Comic Shop near you next week. 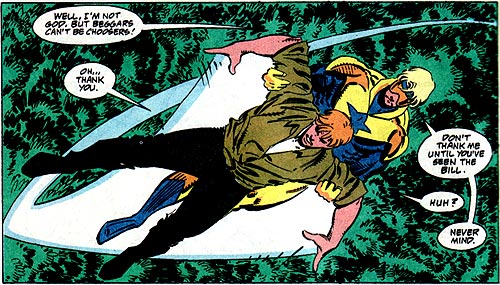 Outside of time-travel shenanigans in the Stone Age, Booster Gold hasn't been seen interacting with DCnU continuity since Bat-Mite #4, released on September 2, 2015!

This prolonged absence has begun to make many Booster boosters wonder whether our hero might be playing some behind-the-scenes role in the universe-merging, timeline-shattering events of "Rebirth."

At Newsarama, Vaneta Rogers has done a little speculating of her own.

However, as we pointed out in our story exploring the possible new history of the Justice League International, there's one character who's aware of the universe before Flashpoint universe that's conspicuously missing from the "Rebirth" investigation and developments: Booster Gold.

It's possible that Booster and his JLI teammates have just been overlooked in all the "classic" returns in DC's "Rebirth" titles.

Yet there's another possibility - that Booster is actually part of the "Rebirth" mysteries but just hasn't been revealed yet.

Is it possible? Sure, anything is possible in comic books. Do I think it's likely? No. But it sure would be a fun twist, don't you think?

You can read the rest of Rogers' theory at Newsarma.com.

Late last week, Vaneta Rogers interviewed Keith Giffen about the coming changes to Justice League 3000. Giffen was upfront about why everyone's favorite superheroic comedy duo was added to the title:

Rogers: [L]ooking back at what's made the comic successful, you have to admit that your Justice League International characters brought a lot of eyes onto the book. You started with Booster and Beetle, then added Fire and Ice. Do you like how those additions are turning out?

Giffen: Yeah, I'll be honest. We brought Beetle and Booster in to get people to pay attention to the book, or to at least be aware that we existed. Our original idea was to bring back Fire and Ice, but then that evolved into bringing back Beetle and Booster too.

If our book existed in the New 52, though, it wouldn't make sense. We would have to be using different iterations of those characters.

So we took the leap, and DC had no problem with it.

We're exploring a universe that hasn't been explored yet — the "Bwa-Ha-Ha" universe or whatever. And DC was amenable. So we said, let's do it!

It sounds like we might never have ever seen the return of Blue and Gold if it hadn't been for the launch of the New 52. Maybe it wasn't so bad after all?

You can read the rest of the article at Newsarama.com.