From Here to Excelsior

I first re-published the following image from Ross Pearsall's incomparable Super-Team Family Presents... blog back in 2017, but it's even more appropriate today. 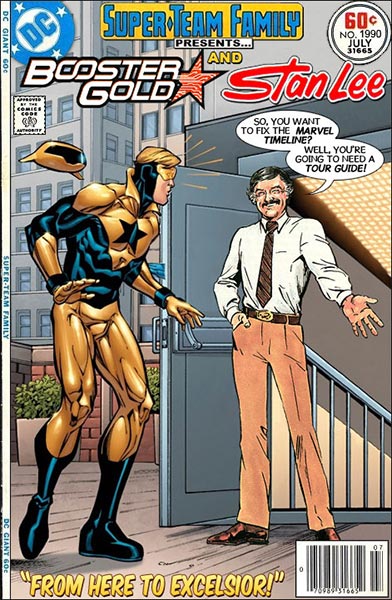 Lee has oft been accused of seeking the limelight at the expense of others, a personality flaw that should be painfully familiar to Booster Gold fans. Whatever faults he might have had, Lee was a master storyteller and promoter, and I shudder to think of what American superhero comics might now be if not for his contributions to the medium. Thanks, Stan.

Everyone knows that Booster Gold cannot travel back in time into the Marvel Universe. But what this cover presupposes is... maybe he can?

This is another genius mash-up cover from the mind of Ross Pearsall of Super-Team Family Presents.... In fact, this cover image is Ross' 2,500th. Congratulations!