After my post on Friday about upcoming variant covers, DC Comics releases the full slate of April solicitations, including the much anticipated Blue and Gold #8 (of 8)! 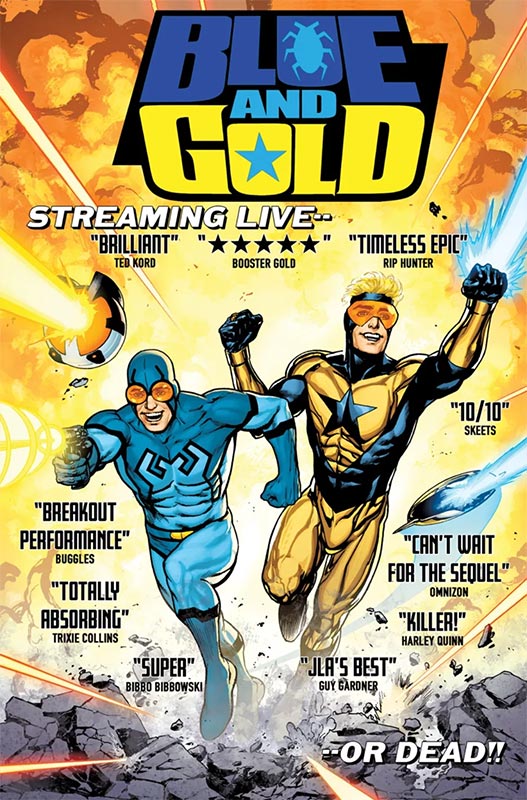 Keep your friends close and your enemies closer! Things have never been easy for Booster and Beetle as they set out on their new business venture where no job is too small, but now a threat from within threatens to bring everything crashing down. A virus has hit the servers at Blue & Gold Restoration, and it could delete our heroes for good!

I love that solicited cover, but it makes me sad to see that the end of the mini-series is near. Could it be doing well enough for DC to give it extra life? I've bought no fewer than 2 copies of each issue, so I'm doing my part! How about you?

You can find all of DC's April solicitations at gamesradar.com.

DC Comics February solicitations are out, and Blue and Gold #7 (of 8) is on the way! 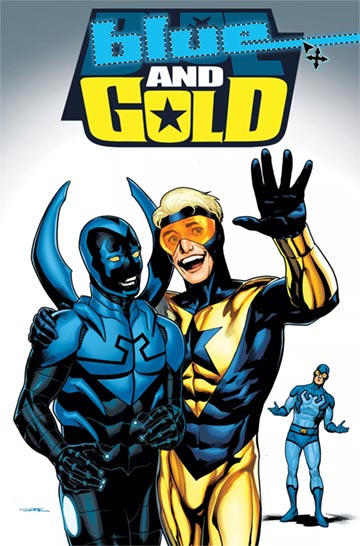 Blue & Gold Restoration is up and running, with Booster Gold and Blue Beetle taking on any number of strange cases, from paranormal extremes to lost civilizations, ancient aliens, gateways to other dimensions, and even super-villains looking for help in going straight! But what happens when one of the threats turns out to be an old friend? Guest-starring Jaime Reyes as the Blue Beetle!

It's about time for the two Beetles and Booster to go adventuring together. (I love that Jurgens is really digging into the toybox for this series.)

And while we're on the subject of solicitations, I should mention that Human Target #5 is solicited to feature Martian Manhunter. There's no sign whether we'll also see a Booster Gold appearance, so we probably won't know until that issue is released February 22.

You can find all of DC's February solicitations at gamesradar.com.

Eskana posted on Nov. 24, 2021 at 10:00 PM
Love this cover so much, and can't wait to see both Blues and Gold together (and all alive.) I especially love the touch of the "paste" icon going over Beetle's "blue" in the title.

DC Comics January solicitations came out Friday and gave us our first look at Blue and Gold #6: 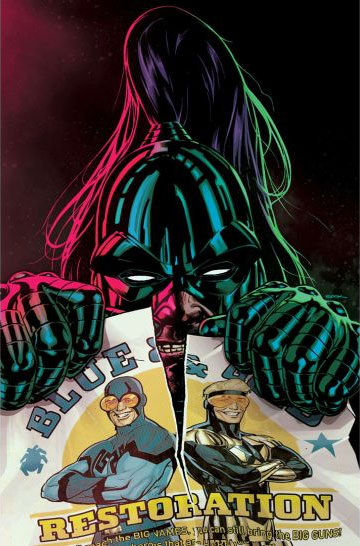 Booster and Beetle are lost in space! After a disastrous first day on their new jobs as hero business owners and operators, the duo has found themselves kidnapped and stranded on an alien world. Who's to blame? Well, the Omnizon of course! Welcome to her home planet, Br'Honn, where a battle to the death between friends is just another Tuesday!

Um, are we not going to mention that's Blackguard on the cover?

Also in the January solicitations is Human Target #4, which has Blue Beetle on the cover. The solicitation is vague, but wherever Beetle is, Booster can't be too far behind. Will he be in this? I guess we'll find out for sure on January 25.

You can find all of DC's January solicitations on gamesradar.com.

The full slate of DC December solicitations came to us over the weekend, and it looks like Booster Gold fans will have something new to read. 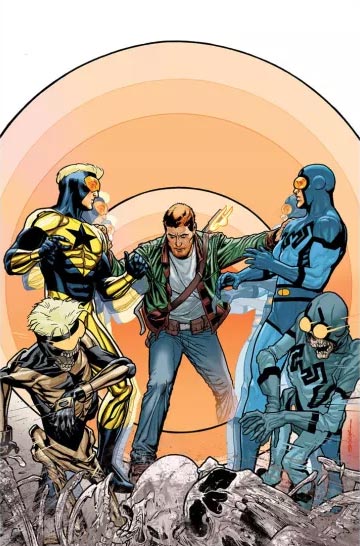 BLUE & GOLD #5
Written by DAN JURGENS
Art and cover by RYAN SOOK
ON SALE December 21
Blue and Gold Restoration is open for business! Only issue is, our duo is falling apart while their waiting room is packed to the brim with mostly illegitimate problems. Now Omnizon, self-appointed ruler of Earth, is here to sentence Booster and Beetle to death for disobeying her royal rule of the land. It'll take a friend from the future to save their present and prevent a PR nightmare that could close their operation for good!

If that teased, death-defying cover is any indication, it sure looks like our "friend from the future" is none other than Rip Hunter, Time Master! Hooray! 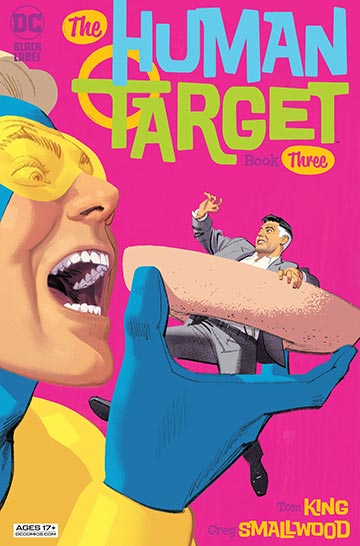 HUMAN TARGET #3
Written by TOM KING
Art and cover by GREG SMALLWOOD
ON SALE December 28
Christopher Chance is a man on a deadline and working to solve a crime that might be unsolvable. Despite his better judgment, he's falling for his lead suspect, and her violent ex-boyfriend isn't happy about it. Oh, and that ex? He's a Green Lantern.

I don't have any idea what Booster Gold has to do with this series, and I remain completely unenthusiastic about Tom King putting words in Booster's mouth again. (Keep your hands off my hero, Tom!) But I can't be mad at Greg Smallwood's cover. I promise to try to reserve judgement until I get it in my hands this December.

You can find a complete list of solicitations, including the previously discussed One-Star Squadron, at gamesradar.com.

ithildyn posted on Sep. 20, 2021 at 10:51 AM
Better not be a revival of the animated series gag about people mistaking Booster for a Green Lantern, and making him the violent ex. Jebus, that's kind of a stretch, but anything Tom King makes me so wary now...
I'm not sure I want it to actually be a GL if it's Guy Garner, either. I know he's kind of a brute, but more in a blowhard way... at least he was in the JLI era.
Don't despoil everything I love from thr JLI, Tom!

On Wednesday, DC gave a sneak peek of its December solicitations via DCComics.com. Blue and Gold was not mentioned, but there is another new title that sounds suspiciously like it.

And for fans looking to laugh, or just looking for a bargain, it’s ONE-STAR SQUADRON.

ONE-STAR SQUADRON is DC’s Super Hero team, where heroism meets capitalism. This ragtag group of heroes led by Red Tornado is here to provide service with a smile. All you have to do is send a request via their on-demand hero app and they’ll answer any call. Whether it’s a children’s birthday party or an alien invasion, no job is too small or too big in this story about the Super Heroes without a billion dollar fortune or Fortress of Solitude to fall back on… heroes like Red Tornado, Power Girl, Gangbuster, and Minute Man. Follow these working stiffs as they work for a living while trying to parse one of the great mysteries of the world--just who’s signing those checks and why?

Poor Power Girl and Red Tornado. They used to be Justice Leaguers. My, how the mighty have fallen.

Hey, wait a second! "One of a kind"? Former Leaguers Blue Beetle and Booster Gold announced their own on-demand super-hero service only last week in Blue and Gold #2! 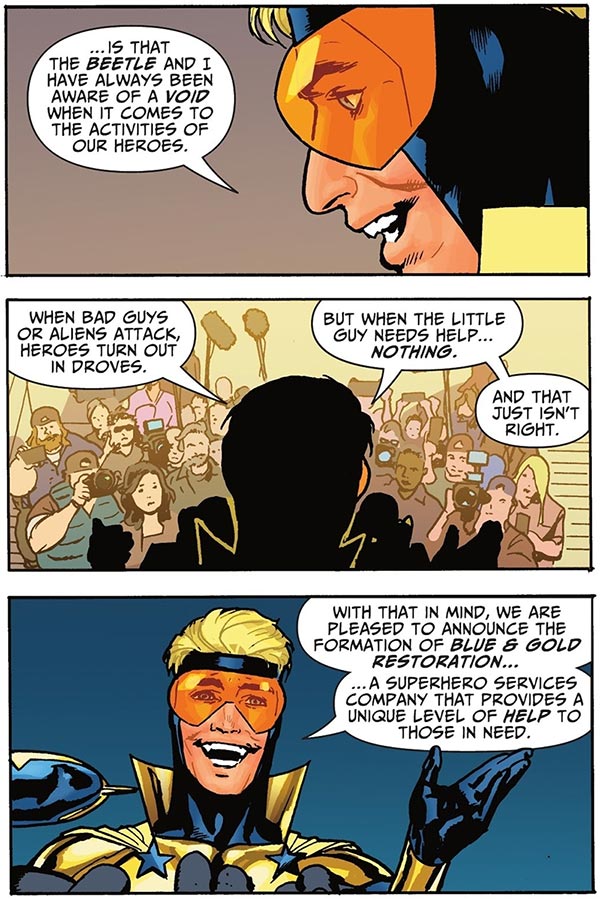 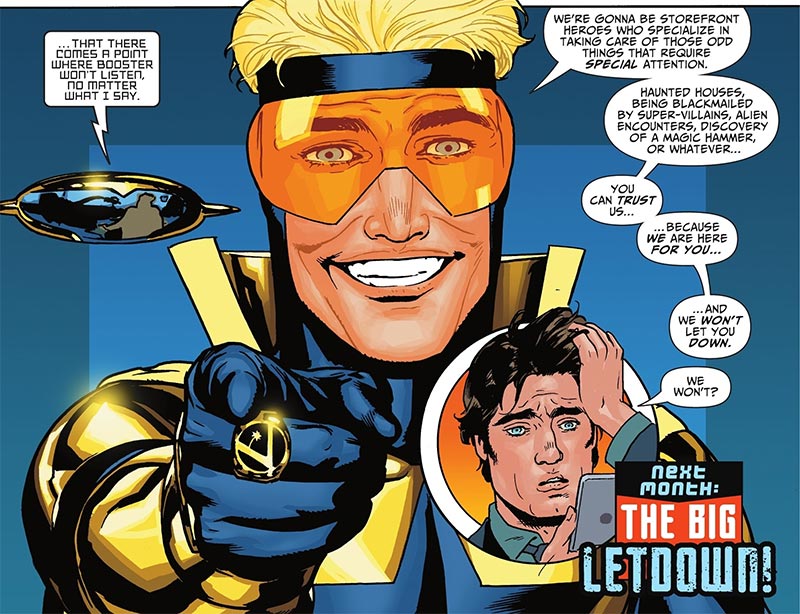 It won't surprise any readers of this site that I've always loved the old, comedic Hero Hotline concept. I'm also a big, big fan of Mark Russell's sharply satirical point-of-view. So I expect great things from this new mini-series.

But in the long run, I'm hoping that Blue and Gold Restoration will be Coke to One-Star Squadron's Pepsi.

Eskana posted on Sep. 17, 2021 at 3:55 PM
I noticed that too, actually. I'm assuming it was just writers not communicating or something, but it would be interesting if their competing superhero businesses at some point conflicted.
I feel like I remember Karen in particular giving Booster a hard time about his commercial endeavors...