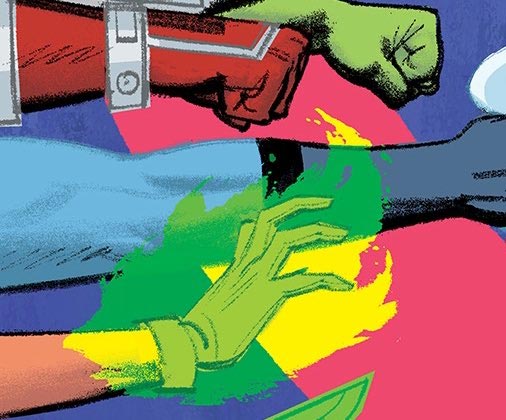 Those arms belong to, from top to bottom, Martian Manhunter, Rocket Red*, Blue Beetle, and Fire. Naturally, this made a lot of people excited at the teased prospect of new comic adventures of the Justice League International.

Of course, that's not what Tom was teasing.

He was baiting the hook with the JLI for a different property he revealed later that same day:

Who can be mad about a bait-and-switch that leads to art this great? (Those new arms belong to Booster Gold, Guy Gardner, Batman, Ice, and G'nort.)

If you didn't know, Christopher "Human Target" Chance has been in the DC Universe since 1972 but is far more famous outside comic books. In addition to recent guest appearances on Arrow, Chance has had his own television series twice (!). Being a TV star probably explains why he and Booster Gold have never crossed paths.

Frankly, the espionage antics of Human Target are a perfect fit for King's storytelling strengths, and any project that keeps King far away from Booster Gold is a project I can support. In fact, I promise to buy a copy of the first issue... but only if they keep that amazing Smallwood cover.

* That Rocket Red arm design belongs to the armor of Maks Chazov, who was never a member of any line-up of any Justice League, international or otherwise. Chazov worked for the pre-New 52 United Nations-sponsored incarnation of Checkmate. But it wouldn't be the JLI without a representative Rocket Red, and all the Reds who appeared on a JLI roster are dead. I guess you can't bring every dead hero back to life.

UPDATE 2021-07-12: Shawn dropped by the comments to point out that Greg Smallwood has posted process and reference pics of the cover's development on Twitter.com. He includes an interior pic of the JLI, and it is glorious.

Shawn posted on Jul. 12, 2021 at 3:15 PM
Go to Greg Smallwood's Twitter @SavageSmallwood for an interior page of the whole JLI

Cort posted on Jul. 13, 2021 at 9:30 PM
I'm incredibly leery of Tom King Booster again, but Greg Smallwood art, whew lad, that may be worth it for another go.

Palchinski posted on Jul. 15, 2021 at 12:28 PM
Yeah, I will not be giving this one a try. Tom King written Booster Gold. Fool me once(Batman: The Gift), shame on you, fool me twice(Heroes in Crisis), shame on me. Not going to threepeat that mistake. Not again.

Boosterrific [Official Comment] posted on Jul. 15, 2021 at 4:37 PM
I can't say as I blame you, Palchinski. I wish they were publishing one without dialogue, a "Tom King-free edition.

With the latest Superman event, "Leviathan," now unfolding in your Local Comic Shop, it's interesting to look back at another Superman event story with a curious connection to real history.

The JLA: Our Worlds At War one-shot, released 18 years ago today, was a middle chapter in the 2001 Superman "Out Worlds At War" crossover event. Booster Gold plays only a very brief role in the event as he, Blue Beetle, Guy Gardner, and Rocket Red fight to defend Russia from an alien invasion. This is Booster's only appearance in the entire comic: 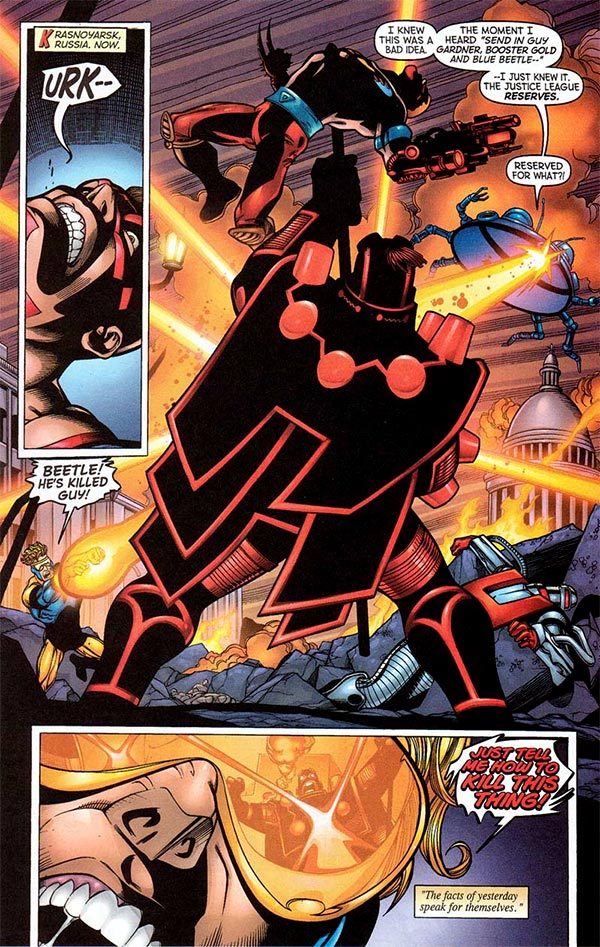 It isn't the inclusion of the Justice League International that makes this issue a historic curiosity.

As mentioned, the issue's story details a surprise attack by a malignant force that opposes everything Superman stands for. To frame the magnitude and severity of this invasion, writer Jeph Loeb uses the words of United States President Franklin Delano Roosevelt to draw a direct, overt connection to a real tragedy in American history, specifically the Japanese surprise attack on Pearl Harbor 60 years earlier.

The irony here is that although this issue, with its focus on surprise attacks against America, was released on July 5, it has a cover date of September 2001.

And now you know the rest of the story.