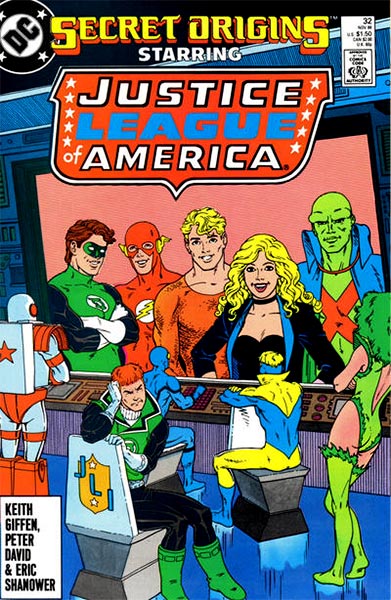 Dick Giordano would have turned 84 years old today. If you don't know who he was, you should.

Giordano was the Managing/Executive Editor at DC Comics during the decade that saw Crisis on Infinite Earths, The Killing Joke, and Watchmen. Without him, there wouldn't have been a Booster Gold. Literally.

This is what Booster's creator, Dan Jurgens, had to say when I asked him about Booster's origin in 2010:

Boosterrific: You had not done a lot of work for DC prior to Booster Gold Volume 1. How was it that as a relatively inexperienced writer/artist, you were given such an opportunity as creating a new series for the mainstream DC Universe?

Dan Jurgens: Why was I allowed to do Booster? Well, I didn't make the decision but I do know this: When I first explained it to Dick Giordano and told him the basic idea of what the character could be and who he was, Dick saw him as someone who was entirely different than anyone else in the DCU. I think some of Dick's background as an editor, where he often handled somewhat offbeat characters, may have had something to do with that. But he was attracted to the book and as Managing Editor, gave me the thumbs up and approved the project. Sometimes younger, untested talent, will actually pay off with somewhat different ideas and concepts.

Giordano may have died in 2010, but his legacy lives on. Thank you, sir.

Booster Gold Will Get Your Kitty

Illustrator Dwayne Biddix put together this sample Business card for Booster Gold and uploaded it to DeviantArt.com: 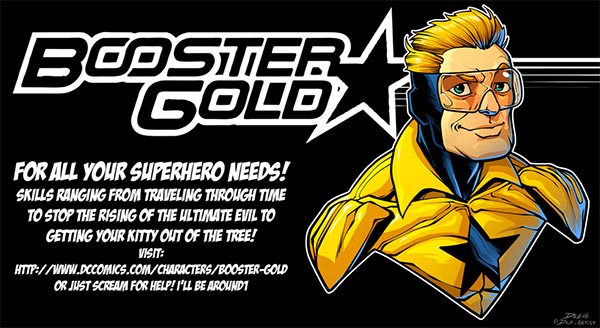 As a time-traveler, Booster Gold understands how delicate our timeline is, and he often finds himself protecting the timestream. But in the ultimate irony for a fame-seeker, no one can ever know it's him. After all, if people find out what he's doing, it could change history and threaten the timestream. It's a responsibility that Booster Gold has come to take seriously, suggesting that there may be more driving this spotlight-loving hero than a simple quest for adoration. Even if he does spend as much time signing autographs as he does saving lives.

I don't think that's really accurate. To say that there "may" be more to Booster than his "quest for adoration" sells even the Nu52 incarnation of the character short. But maybe that's why I think it's such a good idea to make my own Booster Gold introduction video.