Booster Gold and Skeets Are Not Dead

The Justice League Unlimited episode "The Greatest Story Never Told" was first broadcast nearly a decade ago, but the AV Club is just now getting around to reviewing it. I'm doing much better: I waited only a week before reviewing the review.

Regular AV Club contributor Oliver Sava opens his review by comparing the episode to the Tom Stoppard play Rosencrantz and Guildenstern Are Dead. Sava doesn't follow through on this reference, instead turning his attention to other, stronger influences on the episode. However, once mentioned, this comparison becomes worthy of at least a brief exploration.

If you've never seen Rosencrantz — it's a favorite of mine, and I recommend it without reservation — the play is a meta-textural, existential tragicomedy. The misadventures of its protagonists, minor supporting characters from Shakespeare's Hamlet, are informed by the audience's knowledge of their fate in their original source material. By comparing what the audience knows about the protagonists to what they think they know, Stoppard is able to ask a variety of questions about the meaning (or lack thereof) of life. Honestly, Rosencrantz and Guildenstern Are Dead is the highest form of fan fiction.

In a similar way, "The Greatest Story Never Told" is a more enriching episode if the audience is familiar with the character of of Booster Gold. Writer Andrew Kreisberg uses Booster, a character generally perceived as infuriatingly selfish, to define heroism within the DC Universe. What does it mean to be a hero when a common house fire is insignificant compared to a reality-warping magical disaster? Is heroism objective or subjective?

Sava's AV Club review doesn't explicitly call "The Greatest Story Never Told" recommended watching, but any time a televised cartoon for children can introduce deeper subjects for its young audience's consideration, it deserves a look. If it can do so with Booster Gold, it becomes must-watch television.

You can find the full review at AVClub.com.

Been a Long Week

This might be my favorite Booster Gold cosplay pic ever. 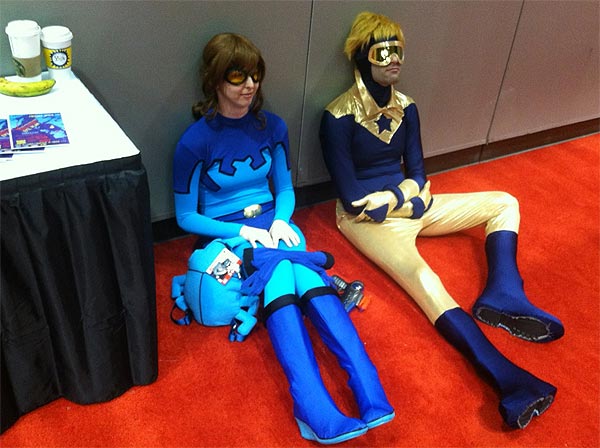 This is just one of several cosplay pics from C2E2 on the tumblr.com feed of Oliver Sava. You can check them out here.