Gonna Give You Up

In case you missed it this week (and I don't blame you if you did), Newsarama.com has gone to that great comic book news website in the sky.

As you can see from that screenshot, it looks like the remains of Newsarama have become yet another casualty of the Dark Side of the Internet's never-ending hunger for listicles.

Newsarama editor Chris Arrant tweeted that Newsarama's staff survives intact behind the scenes, but as that screenshot shows, "Newsarama" content is only a single landing page for the few comics-adjacent articles on a website dedicated to video games.

Like the once great ComicBookResources before it, all of Newsarama's archives have also been wiped from servers as though they never existed. That means if you come across any Newsarama.com links on this site, such as I tended to provide for DC's monthly solicitations, they now link to the front page of a video game website. Sorry about that. Think of it as rickrolling, 2020-style.

(You young 'uns do know what rickrolling was, right? It was a meme your parents enjoyed. I'd link you to a website explaining it, but most of them have shut down by now.)

So continues the cycle of the commercial niche-interest press. Comic book journalism, such as it is, will survive, I'm sure. What form will it take? Only time-traveling super heroes from the future know for sure, though if I had to guess, I'd say it'll probably look like this.

UPDATE 2020-6-6: And now The Hollywood Reporter breaks the news that DC and Diamond have parted ways. That's a big comic book industry story that may affect where and how you can buy future Booster Gold comics. What's next, 2020?

Jordan N. posted on Jun. 7, 2020 at 12:04 AM
Boy is that depressing. Newsarama was my primary source for updates when I first started reading comics. Not sure what is better, for a comics news site to just die like Comics Alliance, or for it's rotting corpse to be reanimated as yet another crappy listicle site. At least CBR still has Brian Cronin providing interesting comic book history in his posts.

PS: Well done, you even telegraphed it and I still fell for that link! Ha!

Boosterrific [Official Comment] posted on Jun. 7, 2020 at 1:51 AM
Knowing that at least one person clicked it makes it all worthwhile. Thanks, Jordan.

Ithildyn posted on Jun. 7, 2020 at 11:40 AM
Maybe the linked articles' content can still be accessed in the Internet Archives' Wayback Machine. That might be a lit of links to check, though.

DC solicitations for May were released on Friday, and the biggest news for Booster Gold fans won't be making it into stores until August!

That's a whole lot of Booster Gold (including the Quarterly issue that was just reprinted this week in Justice League: Corporate Maneuvers).

The solicitations don't indicate that Booster will be in Harley Quinn #73, which appears to continue the story begun in issue #70. I guess we'll find out whether that's a must-buy for Booster boosters when we get to May 6.

You can read the complete list of solicitations on Newsarama.com.

I had been prepared to remind you to buy Superman: Heroes #1 today at your Local Comic Shop, but that will no longer be necessary. According to Newsarama.com, DC has postponed the release until February 19.

Why? "The publisher did not give a reason for the change." Hunh.

This is disappointing news if only because it means I'll have to wait three more weeks to find out the in-universe explanation of why Harley Quinn is sitting at this table, as seen in last week's Superman #19:

At least Wonder Woman has the good sense to look uncomfortable to be sitting across the table from the Joker's former sidekick. Is anyone keeping track of how many people she's killed in her own title? I believe in second chances as much as the next guy, but it's not like she was a serial shoplifter. There has to be some limit to how many people you get to kill before you don't get to sit at the hero's table anymore, right?

Aaaanyway. Whatever reason DC has for postponing the issue, I hope they don't change the solicited cover. There just aren't enough books on the stands featuring Booster Gold's crotch. 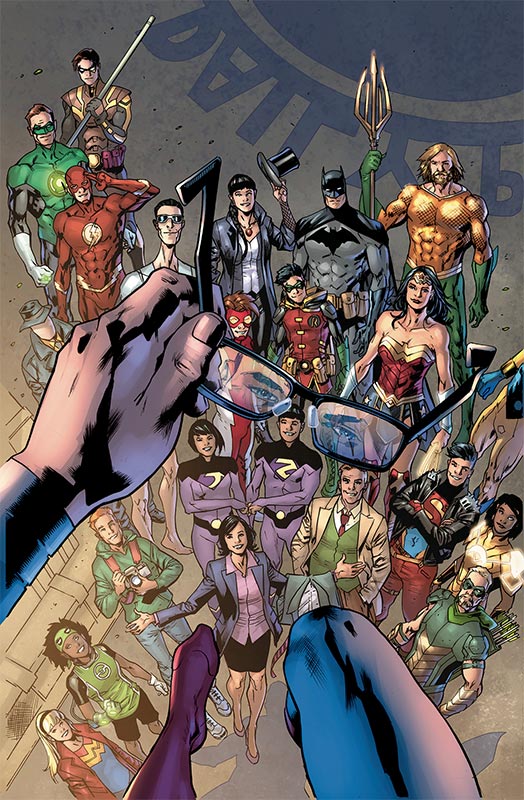