Showing posts 0-3 of 3 matching: flashpoint beyond

Comichron.com reports that the North American comic book industry had its most profitable year ever in 2021, and it's easy to understand why. There are a lot of great comic books being published right now.

Personally, I spent over $50 at my Local Comic Shop on DC Comics alone this week. My favorite right now is Tom Taylor and Bruno Redondo's Nightwing which is so well written and illustrated that it's almost a crime *not* to buy it.

Restricting the conversation to books that are out this week, I should mention that despite my misgivings about drinking from the well of Crisis on Infinite Earths one too many times, I'm still looking forward to where Dark Crisis is headed. Sadly, Booster Gold doesn't appear in this week's Issue 2, but I'm sure he'll be back soon. We already know he's on the alternate cover for next month's issue 3 due in stores on August 2.

If you didn't already pick up the first and last issues of the Justice League Unlimited mini-series for Booster's small role in that, be aware that the entire series has now been collected into a single volume.

Also available this week is DC Vs. Vampires #7. Booster Gold's role in this story is limited to the bottom corner of the full-page splash panel on page 2 (visible in the issue preview AIPTcomics.com). Booster's cameo appearance aside, I've decided this title is very, very definitely not for me, so that's all I'm going to say about it here.

Skeets likes it when you buy books with Booster Gold in them, but you do you. There are too many good options out there these days to waste time, money, and emotional energy on the ones you don't like.

UPDATE 2022-07-06: Logan writes in to point out that Booster also gets a tiny cameo in this week's Flashpoint Beyond #3. Thanks, Logan!

Booster booster J's emails are usually in regards to the many, many typographical and grammatical errors on this site. (I'll take all the help I can get, J. Thanks!) But the message in my inbox today was to let me know that Booster Gold gets a shout-out in this week's Flashpoint Beyond #2.

For the record, the rule here at Boosterrific.com is that we track all Booster Gold comic book visual appearances but not text-only dialogue references, much less the expositional internal monologue of a murderous Dr. Batman. (Back in the day, this name drop would be inside a bubbled thought balloon!)

Therefore, Flashpoint Beyond #2 will not be added to the Boosterrific Database, and this blog post will be the only place on the site you'll see it.

If that bothers you, I recommend that you get to your Local Comic Shop and pick up your own copy of Flashpoint Beyond #2, just like I did. A compulsive collector's job is never done! 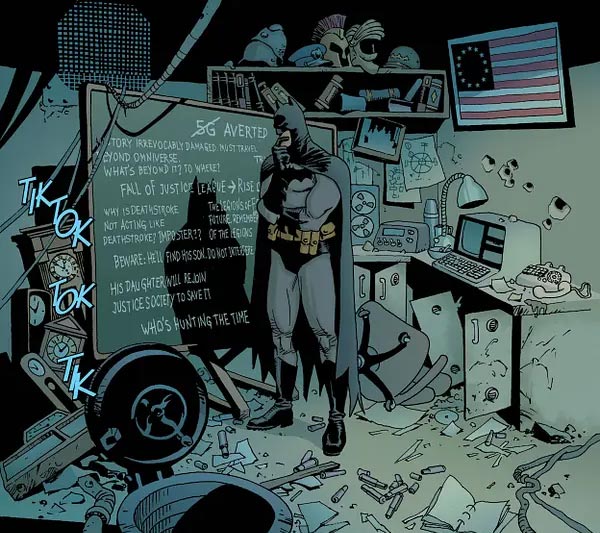