I Should Have Mentioned This Sooner

On Monday, I linked to a CBR interview with Dark Crisis writer Joshua Williamson. When I wrote that post, I didn't realize that Williamson had already tweeted Ethan Young's alternate cover for Dark Crisis #3 which features Blue and Gold: 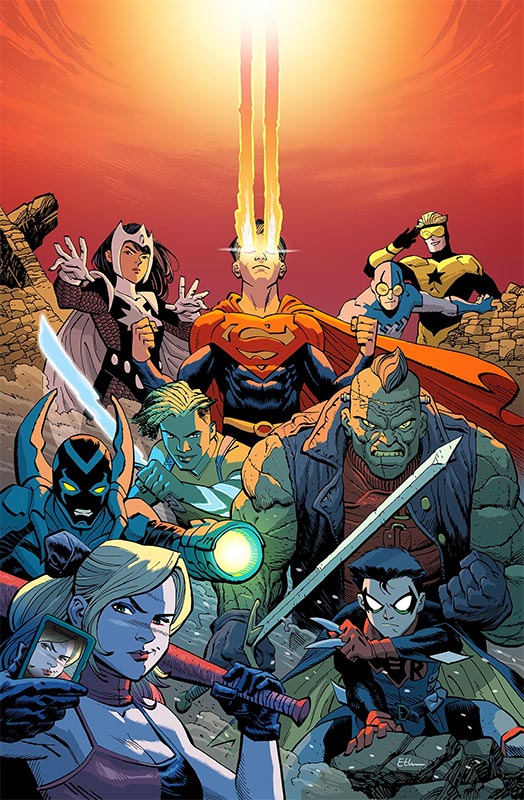 No front-facing camera, Harley? Is that an iPhone 3?

That group is what CBR called the "Not Really" Justice League that Jon Kent will form in the wake of the Justice League's apparent death in Justice League #75. Williamson's tweet emphasizes "THERE IS NO JUSTICE LEAGUE." Given the League's history, that sounds especially ominous.

Longtime Booster boosters may recall that in the absence of a Justice League following the events of Infinite Crisis, Firehawk organized a new, self-proclaimed Justice League during the year-long 52. It lasted 18 pages before being defeated and disgraced... by Skeets.

See, a wormhole had opened in present-day Metropolis and a swarm of pirates had just descended on the city streets....
In hindsight, that probably should have been a job for Superman.

(Technically, that new League was thwarted by Skeets' corporeal body but not its consciousness, although that opens a whole 'nother can of unresolved worms about whether or not Skeets is truly sentient. But I digress.)

Of course, Firehawk's team didn't have a Booster Gold, much less two Blue Beetles. (And they presumably won't have to fight Skeets.) So maybe Superman Jr's team will have better luck against the all-consuming evil that effortlessly disintegrated Superman, Wonder Woman, and Martian Manhunter among others.

I wish the Not Really Justice League all the luck when Dark Crisis #3 drops this August. They're going to need it.