This Day in History: Blast Off

Not so long ago, Erin of Exploring the Time Lab was ruminating on some older comics she wanted to read. Included in her list was Blasters Special #1, which just happens to have been released 29 years ago today. 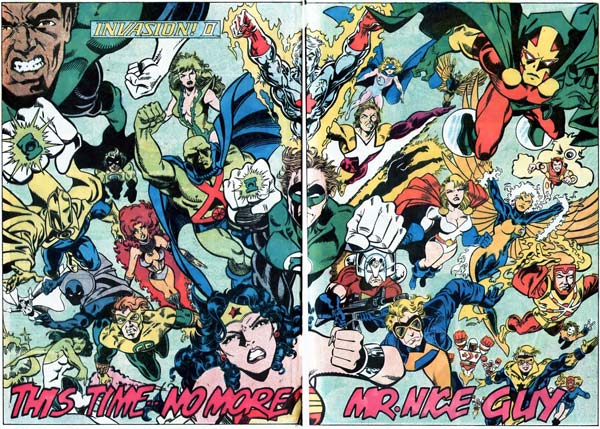 The Blasters were a space-faring group of super heroes spinning out of the Invasion! event. (I always think of them as a second-rate Omega Men.) Their biggest claim to fame was the inclusion of cast-off JLA mascot Snapper Carr, who had gained the ability to teleport by snapping his fingers. Snapper's inclusion in the Blasters was short lived (as were the Blasters themselves: their entire career was limited to Invasion, this one shot, and a couple of issues of Valor). Snapper would eventually move on to support the DC One Million-incarnation of Hourman in his own title.

So far as Booster Gold is concerned, his brief cameo in Blasters Special is limited entirely to the two-page spread pictured above. Of special note is the fact that this is the only time to date Booster has appeared on-panel with lesser known DC Comics heroes Brother Power the Geek or Shade the Changing Man. Oddly, Booster Gold wouldn't appear on panel with any of the Blasters until 2007, when he finally crossed paths with Snapper Carr at the wedding of Green Arrow and Black Canary.

There you go, Erin. Now you know what you've been missing.

Over on her blog at Exploring the Time Lab, Erin is working her way through reviewing the original Booster Gold comics. She's already up to issue 5.

She's working fast. By the time you read this, she may already be on to volume 2!

Back in June I told you to expect Booster Gold as a chess piece and as a deck-building game card. There was one other game I hesitated to mention because I was waiting for proof of Booster's inclusion. Turns out I just wasn't looking hard enough. 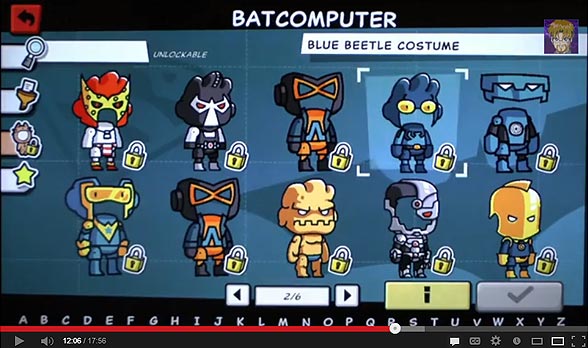 In this youtube demo from E3 by kNIGHTWING01, Booster's Nu52 costume is clearly included in the game. That means your avatar will be able to cosplay as Booster in the upcoming Scribblenauts Unmasked video game from 5th Cell. Hooray!

The game will be available on Wii U, Nintendo 3DS, and Windows PCs on the 24th of this month. For more details, visit www.Scribblenauts.com. (Thanks to Erin of Exploring the Time Lab for finding that video).

Tinuvial posted on Sep. 13, 2013 at 10:46 PM
Tis indeed intriguing but I couldn't help but notice that Booster (and Beetle [yay]) have to be unlocked. My question would be...how do you unlock those two the fastest way possible. *wink*

Last week, Erin posted the map of Booster Gold's mansion from Booster Gold, Volume 1, #16 on ExploringTheTimelab.blogspot.com. She lamented in her post, "I love looking at blueprints and maps so I do wish more comics had these sort of things." 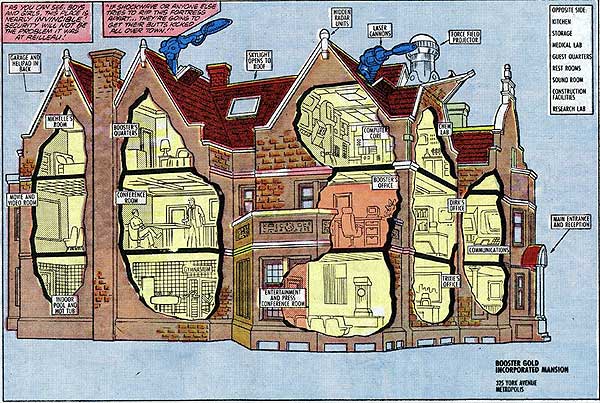 Nearly 3 decades later, it's easy to see that cutaway as one of many Silver Age influences on Booster Gold volume 1. Time travel, sidekicks, evil doppelgangers, alien invasions, and Superman/Legion of Super-Heroes connections were cornerstones of the Silver Age DC Universe.

Immersed in the Silver Age trappings, a self-aware character like Booster Gold was a shocking departure for DC, even in the late Bronze Age. Some readers found this change refreshing, others were put off. But it is this simultaneous bi-polar acceptance and rejection of Silver Age concepts that has defined Booster Gold for most of his career (until the New 52 openly rejected the characters and history of the pre-Flashpoint DC Universe).

As a fan of Booster Gold and the comics of yesteryear, I can also say that I love looking at blueprints and maps, so I, too, wish more comics had these sort of things. Thanks for reminding us of the good old days, Erin.

Worst Book of the Year

Now that we're past Christmas, popular media will devote the rest of the year to retrospective lists for 2012. Booster Gold fan and comic-book blogger Erin of Exploring the Time Lab has gotten a head start with her own superlatives list. She saves her biggest gripe for last:

Worst Book of the Year: Justice League International Annual. I could have made this the worst character derailment but this comic was worse than that. The writers ignored most of the actual comic series itself which felt like a big screw you to the readers. I try not to see things like that but think about it. As someone that invested time and money on the relaunch series since #1, that enjoyed the characters then told none of that mattered. Having all of that sweep under the rug to do their own take and totally destroy the team. Not only did it feel like an insult to the fans but I can't help feeling bad for Jurgens who had his work ignored. At least Countdown to Infinite Crisis had the Ted and Booster friendship to make it special. Now Booster's back to no one liking him, being a loser that lies for no reason. Skeets is just an anti-virus, and Rip is erased with Booster. Thanks again Johns, we can't tell something's a big event without needlessly killing or derailing a character.

To read the rest of Erin's list for 2012, including her "Biggest Surprise Read" and "Biggest Disappointment," visit exploringthetimelab.blogspot.com.