Worst Book of the Year

Now that we're past Christmas, popular media will devote the rest of the year to retrospective lists for 2012. Booster Gold fan and comic-book blogger Erin of Exploring the Time Lab has gotten a head start with her own superlatives list. She saves her biggest gripe for last:

Worst Book of the Year: Justice League International Annual. I could have made this the worst character derailment but this comic was worse than that. The writers ignored most of the actual comic series itself which felt like a big screw you to the readers. I try not to see things like that but think about it. As someone that invested time and money on the relaunch series since #1, that enjoyed the characters then told none of that mattered. Having all of that sweep under the rug to do their own take and totally destroy the team. Not only did it feel like an insult to the fans but I can't help feeling bad for Jurgens who had his work ignored. At least Countdown to Infinite Crisis had the Ted and Booster friendship to make it special. Now Booster's back to no one liking him, being a loser that lies for no reason. Skeets is just an anti-virus, and Rip is erased with Booster. Thanks again Johns, we can't tell something's a big event without needlessly killing or derailing a character.

To read the rest of Erin's list for 2012, including her "Biggest Surprise Read" and "Biggest Disappointment," visit exploringthetimelab.blogspot.com.

Since Justice League #12 also comes out today, you may want to keep your eyes open when you visit your Local Comic Shop this week. False alarm. I bought it. It's terrible and in no way has anything to do with Booster Gold. Never mind.

What's next for the JLI? Even Skeets wants to know what happens in this annual. Skeets covers its visual receptacles and hides.

GL2814E posted on Aug. 30, 2012 at 7:33 AM
He was too much of a threat to the New 52 universe, giving fans every where the hope that he could undo the awful and conflicting parts of the New 52 and bring back the great bits of the old universe. This is why amateurs like Barry Allen should leave time travel to professionals.

ryan sias posted on Aug. 30, 2012 at 11:18 AM
The Annual had great Booster moments! It gave me hope, and I think we will be getting a booster series in the next year. Geoff seems to have plans for him, which is good! Yeah JLI 12 was awful, you should post about the annual!

Tim & Trystan Van Bruggen posted on Aug. 30, 2012 at 11:48 AM
Okay, the annual wasn't TOO bad. IT definitely had it's Booster moments, but felt too much like a way to radically end JLI's existence to horn in the Justice League changes coming down the pike. I do agree with Ryan Sias that it looks at least hopeful that Booster will return to his time-cop ways next year in the pages of Justice League. We know that Geoff Johns has a soft spot for our own Michael Carter, so I'm sure that Booster's "fade-out" is temporary. (I hope.)
But the art was TERRIBLE. Every male in the book, even skinny/lanky teenager Jaime Reyes was made to look as if he bench presses 400 pounds a day and eats 5000 protein calories a day? WHAT'S UP WITH THAT? Superhero doesn't mean HULK body for everyone!

The Justice League International Annual isn't due for another two weeks. While it might seem odd to release an annual to a series that has already been canceled, it certainly won't be the first time that this has happened to a Justice League title. Sixteen years ago today, DC published Justice League America Annual #10 more than two months after the series had been canceled at issue #113. Then, as now, Booster Gold took center stage.

The theme of the DC annuals in 1996 was "Legends of the Dead Earth," a series of tales about how the heroes of the DC Universe would go on to inspire humanity years after their own deaths. While many of the stories in these annuals could be considered unlabeled Elseworlds tales of an alternate reality, the Justice League story was heavily linked to ongoing continuity. 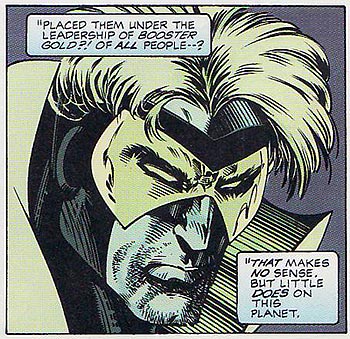 The story focuses on Captain Atom during one of his many unintentional trips through the quantum field to a future where Maxwell Lord's villainous schemes were oppressing humanity. (Sound familiar, Justice League: Generation Lost readers?) Lord has created a new JLI-inspired team called the Alliance that spend most of their time violently putting down "Trogs" bold enough to oppose Lord's tyranny. Whatever his original motivation, it becomes clear that Maxwell Lord has become corrupted inside former JLI-foe Lord Havok's robotic body (expanding on a plotline last seen in Justice League America #100).

The other original member of the JLI on the team is Michael Jon Carter. Refusing to be called Booster Gold, Michael acts as the team's field leader. Michael's position as Lord's right-hand man is fitting given that Lord had once hand-picked Booster to join his new JLI (as seen in Booster Gold #16). Michael is still something of a time traveler, having survived the intervening centuries by replacing his organic parts with mechanical imitations (a process begun in Justice League America #90). Wearing a prototypically Extreme! 1990s costume, this Michael exhibits a no-nonsense demeanor, increased power, and a warped set of personal values, even by Booster's admittedly questionable standards.

Before the story careens to its conclusion, it is revealed that Maxwell Lord is an evil megalomaniac who relives his past with living puppets based on his JLI template. Booster's motivations are never made clear, though Captain Atom expresses many uncharacteristically derogatory theories. Booster Gold fans are likely to be far more forgiving to our hero's actions.

Clearly a product of its era, this book is hardly the best annual in which Booster Gold appeared. Christopher Priest's story really doesn't make much sense, and Nick Napolitano's inks are especially unattractive. With the bar for annuals of cancelled series set this low, Geoff Johns and Dan DiDio won't have to do much work to top this effort.

On Friday, DC announced via their blog that Justice League International Annual #1 will be shipping August 29, 2012. DC promises that "the ramifications of this [issue] will be felt across the board," but the best part of this news is that Geoff Johns will be co-writing the book. 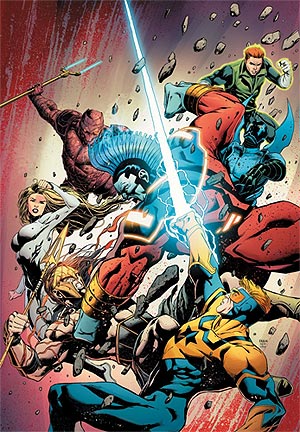 Johns is probably on-board for this one-shot because the issue will tie-in with his regular gig as writer of Justice League (issue #12, specifically). For his part, co-writer DiDio is probably on-board to tie-off some loose ends dangling from the his recently-canceled gig as writer of OMAC. Fans of either series should be excited about the crossover potential here, especially since Johns and DiDio are Chief Creative Officer and Co-Publisher of DC Comics, respectively, and therefore are in a position to see that what happens in their issue of JLI is relevant to events throughout the company.

If the solicitation cover is any indication, it looks like the first thing that the powerful pair has done is ensure that Booster Gold no longer has any gold on his cowl. That's already a change for the better.

Join the discussion of this news in the Boosterrific Forum.

Morgenstern posted on May. 14, 2012 at 10:02 AM
"Booster Gold no longer has any gold on his cowl" I was wondering why his costume seemed a little less stupid to me on that cover.

Shawn posted on May. 14, 2012 at 11:31 AM
According to the future solits released today JLI #12 will be the final issue of the series, they better find a place for Booster!

Grimmy posted on May. 14, 2012 at 12:28 PM
Hopefully back in his original DC Universe, and in a costume that looks like Booster GOLD instead of Booster BLUE.

deusex2 posted on May. 15, 2012 at 1:05 PM
"Hopefully back in his original DC Universe, and in a costume that looks like Booster GOLD instead of Booster BLUE."

Amen to that...And while we're at it, lets pretend that no Flashpoint is going to happen, EVER.