This Is How Jim Lee Sees Booster Gold

Russ Burlingame has already seen Justice League: War, the animated movie based on the first story arc of the "New 52" Justice League title. (His first report on that movie is online at comicbook.com.)

But what should interest Booster Gold fans isn't the movie itself, but the extras. The Blu-Ray includes the bonus documentary Creating Heroes: The Life and Art of Jim Lee. The documentary shows some quick shots of sketches that Jim Lee drew in preparation for the launch of the New 52. And one of those sketches is this: 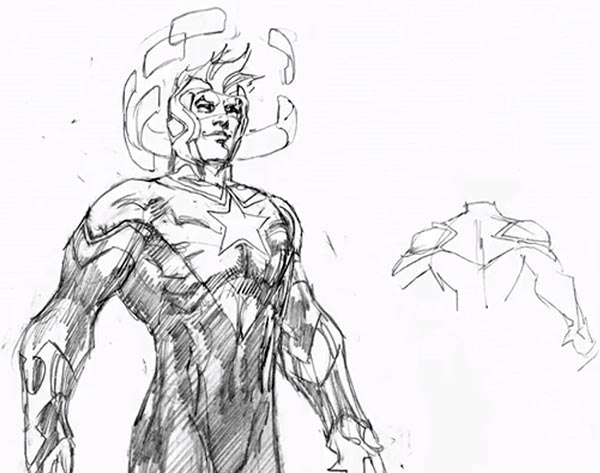 This is presumably Jim Lee's vision of Booster Gold's New 52 costume. It's mostly similar to what saw print in Justice League International, with two significant differences.

1: Head. Although Booster projected holographic panels as early as issue #2, they weren't curved. Note also that the helmet looks almost boxy, more Tron Legacy and Iron Man than ski mask. Was that intentional or was it another unintended effect of so much piping, a pervasive aspect of all of Lee's New 52 designs?

2: Stripes. As you can see from the sketch of the back, Lee considered linking the blue stripes on the biceps to the blue "w" on the chest. That little detail did not make it into the final New 52 design, where they are very definitely two separate lines.

If you want a better look at this and Lee's other sketches, get you hands on Justice League: War, out today.

Thanks to Russ for sharing this with us.

RussBurlingame posted on Feb. 6, 2014 at 11:03 AM
I would bet it's intentional; it seems a bit more football helmet-ish in the Lee sketch.

metrohero posted on Sep. 8, 2014 at 10:42 AM
Informative blog.
For the fun and entertainment you can visit here:http://metrohero.com/.

The Robot Chicken "DC Comics Special" that aired on Cartoon Network back in September 2012 was amusing, but the DVD is going to be way better. Why? More Booster Gold.

As we already knew, Booster's lines were cut from the final episode, but they were saved for the DVD extras. TVshowsondvd.com describes Booster's cut sketch as "Booster Gold's Politics Are...Complex." Robert Greenberger reviewed the DVD for comicmix.com, and he described the deleted Booster Gold scene thusly:

...Booster Gold debating time traveling to kill Hitler with the JSA felt inappropriate (I guess you still shouldn’t make fun of the Holocaust).

That sounds harsh. I feel compelled to defend Booster, but I also realize that there's usually a reason when something doesn't make the cut. We shouldn't expect deleted scenes to be better than what was used, even if they feature more Booster Gold.

You can find out whether or not you agree with the decision or the review when you watch the DVD yourself. It is released today with a suggested retail price of $14.98 ($19.98 for Blu-ray). You can find it wherever fine videos are sold, such as on Amazon.com.

(Thanks to Eyz for the release notification.)

No new comic books featuring Booster Gold are scheduled for released today, but if you have to spend some money to get your fix of Booster Gold, consider picking up the Batman: The Brave and the Bold, Season 2 Part 1 DVD. Frequent site contributor Morgenstern notes that the Amazon.com listing for the animated DVD lists only 2 actors: Batman and Booster Gold! Who knew that Booster Gold did his own voice-over work?

It's just like Booster to hog the limelight when he isn't even the featured star. Batman actually works with 35 heroic guests stars on the 12 episodes on the DVD, and only two of them are Booster Gold and Skeets. The pair appear as contestants on the Riddler's game show, "Riddle Me This?" in the introduction to the episode "A Bat Divided!"

Skeets probably doesn't receive billing because he doesn't have a speaking part: as you can see in the trailer above, the shiny sidekick is gagged in his appearance. Worse, the game show was rigged, so Skeets didn't even win a lifetime supply of Rice-A-Roni! Better luck next season, Skeets!

I've started getting this "Season X Part X" DVD compilations of the show :P
I luv luv loved this cartoon and will miss it a lot :(

The show was pretty popular with kids and adults alike...can't they bring it back on air, perhaps take out Batman from the title (why not "Booster Gold: The brave and the bold"...whaddya say? :D)