No Booster Gold comics this week, but Cort has come to our rescue with new entries in his Booster Gold sketchbook!

Let's take a peek inside (with Cort's commentary):

Got this beauty from Brett Booth. The staggering detail in the background is awesome. Beetle being hidden in there made me laugh. 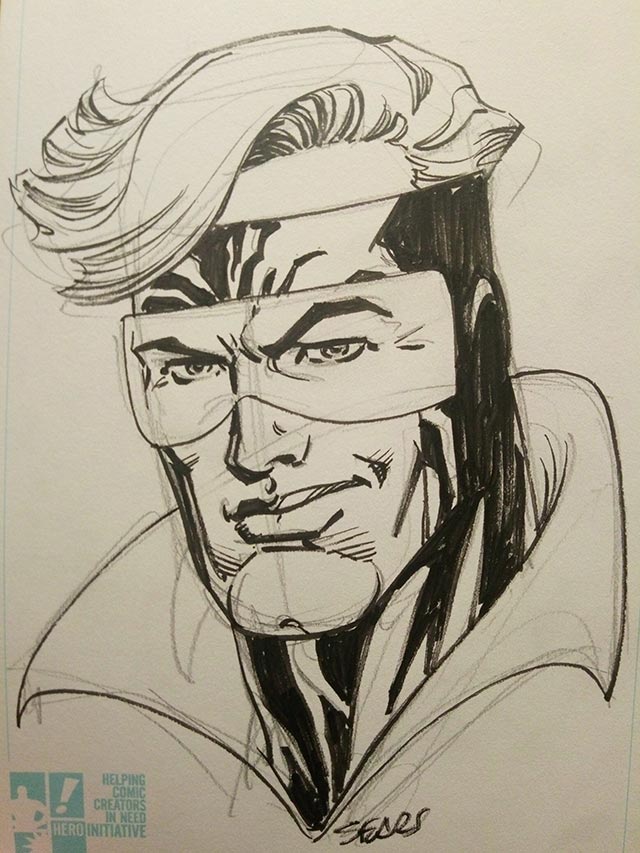 A Bart Sears Booster commish I got for supporting the Hero Initiative, also got to chat with Sears, it was pretty rad.

A wicked and stylish, smug, and funny Booster from Yale Stewart of JL8 fame.

If you want to see even more of Cort's sketchbook, visit imgur.com.

Cort posted on Jan. 20, 2021 at 7:57 PM
Glad you enjoy them! It's been fun getting them. Booth's makes it at 60 commissions in total I believe. I have a few more coming sometime this year which will be fun to share, including a large piece by Joe Bennett.

Together Again for the First Time

For the first time since Rebirth restored Ted Kord as Blue Beetle, he and Booster Gold are front and center in action again!

Okay, maybe they're not "in" action, but they're close enough. Ted isn't much of a hero these days, not since the heart attack that sidelined him into mentoring Jaime Reyes. But he can still don his old costume for special occasions, such as when the real Flash — Wally West! — races S.T.A.R. Labs founder* Speed Buggy for charity as seen in this week's Flash/Speed Buggy Special.

Thanks to Logan for pointing out our favorite heroes in the crowd. (Say, does anyone recognize the kid in the yellow shirt between Igoo and Chunk? Or the character below Grape Ape with the purple stripe down his front? Or the kid in the white jacket behind Robin? They're all probably either Flash or Hanna-Barbera characters. Any guesses?)

Just as last issue, only one of the two covers to Action #997 features Booster Gold. The "standard" cover is by Brett Booth and Norm Rapmund.

You'll find a preview of the first 8 pages of the issue at thegww.com. After you read that, rush to your Local Comic Shop and buy the issue to make Skeets happy!

Brady Kj posted on Feb. 15, 2018 at 2:57 AM
This is the best news! I've been living under a rock recently and didn't know there was any good news in comics! So, he's in a few issues of Action and he's going to be in a few issues of Batman, right? Do you know of any other plans for our buddy?

Boosterrific [Official Comment] posted on Feb. 15, 2018 at 4:39 AM
Rocks are good places to live. ACTION and BATMAN are what's current, but Jurgens has made no secret of the fact that he's still lobbying to get a BOOSTER GOLD volume 3 going. Bendis coming to DC seems to have upset several apple carts, so who knows what's coming?

Brady Kj posted on Feb. 16, 2018 at 9:40 PM
OK. That's good news, then! I actually have heard about Bendis switching teams, even under my cozy little stone. I heard people complain about it, but I don't know enough about Bendis to feel one way or the other. What did Bendis write before? I just remember he wrote JLA after Infinite Crisis.

Boosterrific [Official Comment] posted on Feb. 16, 2018 at 10:48 PM
Bendis essentially ran the Marvel Universe for years. Looks like DC might be giving him a shot at something similar.

Brady Kj posted on Feb. 19, 2018 at 1:31 AM
Reading through his works, I see he's written a lot of things that I've found neither interesting to my tastes nor irritating to my tastes. I also notice he wrote a lot of the big event crossovers. DC hiring him doesn't mean they'll do more crossovers, does it?

Boosterrific [Official Comment] posted on Feb. 23, 2018 at 1:53 AM
Yeah. Quite a bit, actually. I've always put Bendis in the category of writers who are really good when writing characters that they created or feel ownership of (I used to love POWERS) and not so good otherwise. I think he's like J. Michael Straczynski and Mark Waid in that way.

Though interior art is provided by Brett Booth and Norm Rapmund (and not Dan Jurgens), Jurgens did draw one of the two covers. The other cover is credited to Jay Leisten and Neil Edwards.

UPDATE: dccomics.com got their own credits wrong again (for the third issue in a row). The alternate cover is by Dustin Nguyen.

Newsarma.com has the preview. (Spoiler warning: It contains the return of an old Booster Gold foe whose name rhymes with Roderick!)

DC is being generous to Booster Gold fans in 2018. The company released February solicitation earlier this week, and it looks like the "Booster Shot" story teaming Superman and Booster Gold in Action Comics will be running for at least three more months. Via Newsarama.com):

ACTION COMICS #997
Written by DAN JURGENS
Art by WILL CONRAD
Cover by BRETT BOOTH and NORM RAPMUND
Variant cover by FRANCIS MANAPUL
"BOOSTER SHOT" part five! Superman and Booster Gold are stranded in time on a world ruled by not one but two Generals Zod! As Lor-Zod asserts himself as rightful heir to the military dictatorship of their adopted homeworld, Old Man Zod turns his attention to the interlopers from the past. Our heroes' only hope of survival is to repair their craft and get home—but to do that, they'll need to travel into the belly of beast!
On sale FEBRUARY 14 • $2.99 US

ACTION COMICS #998
Written by DAN JURGENS
Art by BRETT BOOTH and NORM RAPMUND
Cover by WILL CONRAD
Variant cover by FRANCIS MANAPUL
"BOOSTER SHOT" part six! Escape from Planet Zod! Superman and Booster Gold must escape to travel back to the present, where the life of the captured Sam Lane hangs in the balance! On sale FEBRUARY 28 • $2.99 US

(Point of grammar: "Zod" is his name, not his title. Therefore, if there are multiple Zods, they should be pluralized as such. Unless maybe they follow different rules of grammar on Krypton. Dictators do whatever they want to.)

I admit, six issues of "Booster Shot" is much more than I thought we would get, especially in the run up to the big Action Comics #1000. Russ Burlingame recently interviewed Dan Jurgens for ComicBook.com, and he got the story why Booster is getting such a spotlight:

"[Geoff Johns and I] had plotted out the end of the Oz storyline and wanted to do a couple of things after that," at the start of the Rebirth era, Jurgens told ComicBook.com. "One of which was 'The Oz Effect.' It's pretty heavy stuff. We wanted to lighten it up a bit and at the same time have it be a logical progression from Oz to this. So, bringing Booster into it was going to accomplish both goals and so far it's working out quite well."

"Booster Shot" sure sounds like a story everyone should be reading. And it's starting early.

Today's issue of Action Comics #992, though not technically part of the "Booster Shot" storyline, concludes with a tease of the Booster Gold story to come. So take note, Booster boosters. If you want in on the ground floor of "Booster Shot," hustle to your Local Comic Shop before indulging in tomorrow's turkey feast!

(Thanks to SuperPat for that tip.)

Enjoy your Thanksgiving, everybody.