In ancient times, May Day was a celebration of the dawning of a new season from the old, a rebirth. In the 20th century, "mayday" became a distress call for pilots.

Both of those etymologies are reflected in CRB.com's latest Booster Gold-centric clickbait, "Every Terrible DC Timeline Booster Gold Has Prevented (or Caused)" by Brandon Zachary.

As one of DC's resident time-travelers, it makes sense that Booster Gold has left an outsized impact on the DC Universe timeline over the years. While he's done some of this to protect the timeline from the influence of others, he's also sometimes done this to try and suit his own goals.

That's a fair point. Booster Gold isn't perfect, and that's a key part of why we like him.

Before you click on over to CBR, know that the article title isn't entirely accurate (surprise!). Zachary covers some of the larger (and worst) changes that Booster has made to history, but there are plenty of other terrible timelines that Booster prevented but didn't cause (like saving the multiverse from the likes of Mister Mind in 52 and Starro in Booster Gold #13, just to name a few).

And, of course, no list of the worst timelines that Booster both caused and prevented would be complete without the time he killed a little girl's dog, as seen in Booster Gold #31. 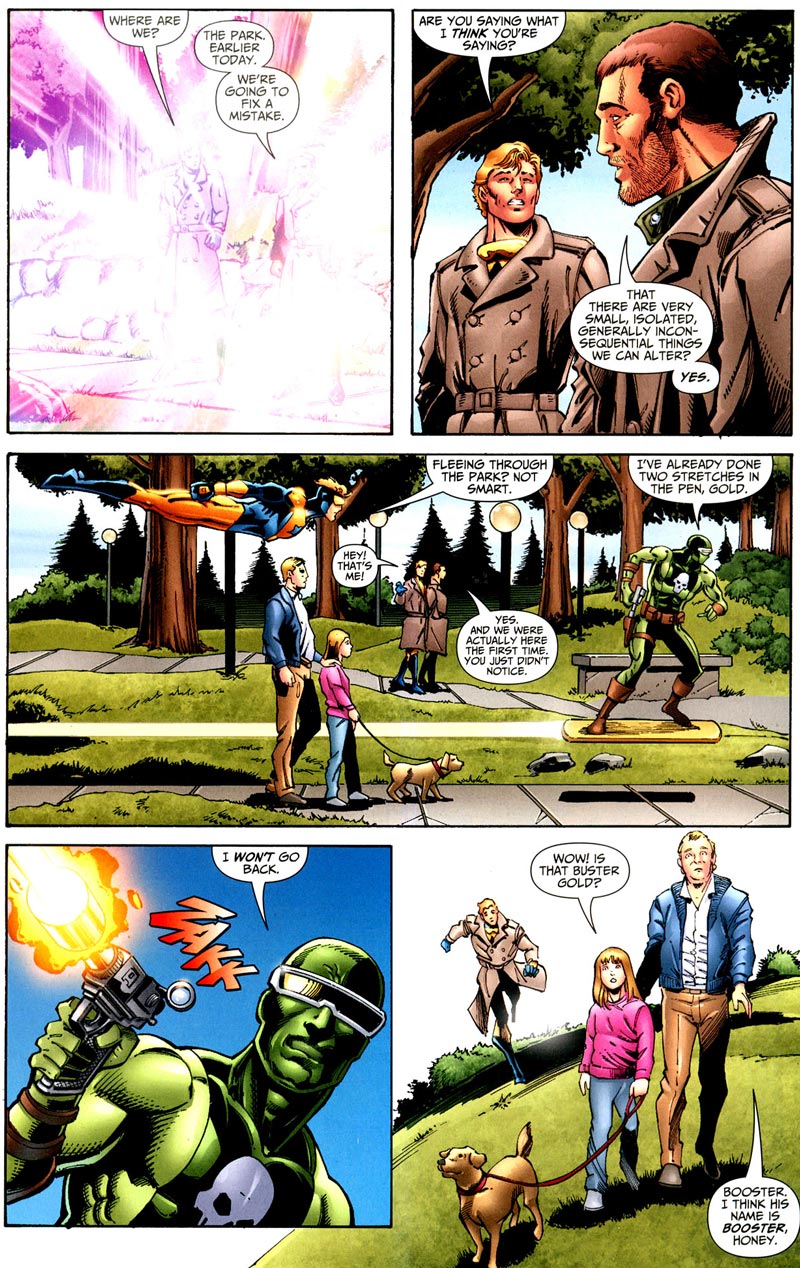 In a multiverse with an infinite number of terrible timelines, a time cop's job is never done.

If you've been reading recent issues of Harley Quinn, you may have noticed that the relationship between the title character and her recurring guest star, Booster Gold, is not what you might have expected from a pair who this time last year were trying to kill one another.

Some of us readers might call that bad writing. Others might say that people forced into dysfunctional relationships have been known to form traumatically bonded pairs. Still others are so happy to see their heroes in a relationship that they'll ignore all that went before. That's more or less the tact that Brandon Zachary takes in his article "Harley Quinn's New Love Interest Could Be... a Justice League Hero?!" for CBR.com.

Booster Gold is far from the worse candidate, especially given their shared sense of humor, similar optimistic personality, and mutual attempts to move past trauma. While Harley has long conquered much of the trauma in her life, she's suffered more of it in the recent events in her life. Booster has been through his fair share of problems too, and the two can probably be helpful to one another as they try to sort their emotions out. Booster also proves to at least be trying to be more empathetic, immediately apologizing when Harley reveals the full extent of what's been happening in her life. The fact that they met during the tragic circumstances of Heroes in Crisis but ended up able to work together proves they're at least somewhat compatible.

Counterpoint: They didn't "work together" in Heroes in Crisis so much as they just sort of succeeded in not being killed themselves.

That said, who am I to judge? Harley Quinn #71 writer Sam Humphries' interpretation of the characters isn't any worse than Tom King's take on the pair in Heroes in Crisis. (No take can be worse than that.) If Humphries decides he wants Booster and Harley to couple up — a sentiment that even Zachary admits isn't explicit yet — so be it.

But I have to warn you, I've heard that relationships based on intense experiences never work.

Boosterrific [Official Comment] posted on Mar. 10, 2020 at 9:00 PM
@Kitten All I can say is that Harley is a hot property right now, and Booster has never been reluctant to hitch his wagon to a rising star. I'm sure he'd be satisfied with being in an open relationship so long as he got his Instagram clicks.

Eskana posted on Mar. 11, 2020 at 6:34 PM
Just throwing it out there... I think "The Gift" version of Booster is worse than Heroes in Crisis...
...meanwhile, I don't know what to think of Booster and Harley as a couple?! But I don't see it as completely IMpossible