“A Year in the Life” 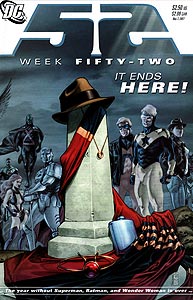 Brief Synopsis: All secrets are finally explained in the final issue of 52.

Issue Notes: Booster Gold battles to save not one world, but 52.

Page 1, panel 1
"Week 0, Day 0." Booster Gold and Rip Hunter, traveling in Hunter's Time Bubble, visit the new DC Multiverse during its creation immediately following the Infinite Crisis. This event was seen from another perspective in the opening panels of 52 Week One. The Multiverse existed to explain multiple occurrences and changing costumes, personalities, and conflicting stories between many Golden Age and Silver Age characters of similar names and backgrounds. The DC Multiverse was thought destroyed during the Crisis on Infinite Earths. Since Booster Gold was the first new hero introduced in the post-Crisis on Infinite Earths DC Universe, he has never had any experience with the Multiverse and can therefore be used to introduce new readers unfamiliar with the multiverse concept.

Page 5, panel 2
SPOILER WARNING!: Rip Hunter refers to the primary Earth, the one from which Booster and Rip Hunter originated, "New Earth." The others are granted numbers from 1 to 51. The great secret of the series 52 is that there are fifty-two new Earths in the DC Multiverse as a result of Alexander Luthor's tamperings during the Infinite Crisis. Reveal 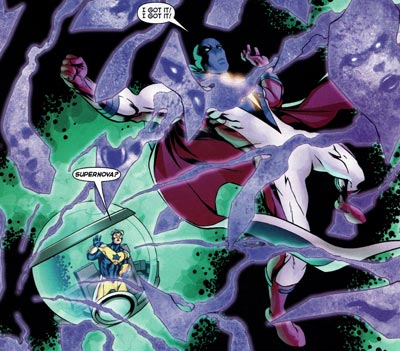 Page 7, panel 1
First appearance of Supernova II. This Supernova appears in the intradimensional space between the new 52 worlds in order to prevent a mutated Mr. Mind from using the Phantom Zone energy to trap Booster Gold and Rip Hunter. The secret of Supernova's identity is short lived. Just four panels later, he takes off his mask to reveal...

Page 8, panel 1
SPOILER WARNING!: ...that he is really Daniel Carter, Booster's ancestor. Hunter recruited Daniel because the Supernova costume was keyed to a Carter's DNA. This is the first meeting between Booster and his ancestor. Reveal

Page 10, panel 1
Booster calls Mr. Mind's evolved form "Mothra," comparing him to one of the monsters that appeared to oppose Godzilla. Mothra first appeared in the 1961 film titled simply Mothra. Mr. Mind does not share much in common with the movie Mothra, other than the fact that both appear to be variations on the life cycles of the insect order leipidopertera: growing from egg to larva to cocoon to winged insect.

Page 11, panel 4
As Booster, Hunter, and Daniel flee Mr. Mind across the multiverse by means of Red Tornado's vibrational map of the multiverse, Mr. Mind's manipulations of the history of the world cause events to change on each world, spawning variations in their histories. On Earth-3, they encounter the new Crime Syndicate of America of Earth-3 (including Owlman, Superwoman, Power Ring, Johnny Quick, Ultraman, and an evil version of the Martian Manhunter). The original Crime Syndicate of America of Earth-3 encountered the Justice League in Justice League of America, Vol. 1, #29. Their existence was erased during the Crisis on Infinite Earths.

Page 12, panel 1
Booster's trip to Earth-10 results in the events similar to those on the pre-Crisis on Infinite Earths Earth-X, where the Freedom Force, led by Uncle Sam, fought against the Nazis, who won World War II.

Page 12, panel 5
Earth-5 is changed to be the world most similar to Earth-S, the pre-Crisis on Infinite Earths world where Captain Marvel and the Marvel Family had so many prominent adventures before joining the DC Universe.

Page 13, panel 1
Mr. Mind's manipulations have modified Earth-22 into a world seemingly similar to the world on which the series Kingdom Come transpires. The Kingdom Come story features a potential future for Earth's current generation of DC Universe heroes. Kingdom Come does include a brief reference to a possible future for Booster Gold as a manager of a super hero-themed restaurant.

Page 13, panel 3
Earth-2 looks like the pre-Crisis on Infinite Earths Earth-2, where the Golden Age DC Universe heroes were said to have lived out their adventures. The Superman who sacrificed his life to save Earth in Infinite Crisis was originally from Earth-2, and was one of the few heroes in the DC Universe who could remember the existence of the previous multiverse.

Page 13, panel 6
The Characters originally published by Charleton Comics all once resided in Earth-C before joining the DC Universe in Crisis on Infinite Earths. The Earth-4 created by Booster's flight from Mr. Mind appears to be similar to the pre-Crisis Earth-C.

Page 15, panel 6
Following a moment of self-doubt, Booster's confidence gets a boost from an unlikely source: Skeets II. Booster has been cradling Skeets' shell since it was abandoned in the previous issue by Mr. Mind.

Page 16, panel 2
POWER UP: "Time travel circuitry on." Booster reveals that his new costume now includes the ability to travel through time and space. This technology was presumably not present when the costume debuted in Infinite Crisis #2, and was added by Time Master Rip Hunter sometime during the past year.

Page 16, panel 4
Rip Hunter hints that Booster's future "glory years" are still ahead of him. Fortunately for Booster's ego, Booster is not around to hear him say this. 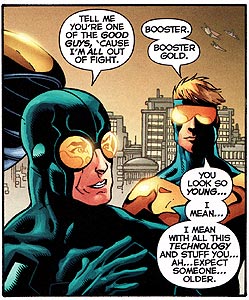 Page 17, panel 3
Booster Gold and Blue Beetle II meet for the first time, chronologically, the day following the conclusion of the Crisis on Infinite Earths. Booster has traveled back to this point in the DC Universe history to recover the Blue Beetle's magic scarab. Blue Beetle is unaware of Booster Gold because Booster will not return to the "present" and make a name for himself for several more months.

Page 24, panel 1
SCHOOL'S IN: A brief view of Rip Hunter's chalk board includes hints about the future of the new DC Multiverse.

Page 25, panel 6
Booster and Rip Hunter uses Skeets to capture and contain Mr. Mind long enough to return him to trap him in the timestream. For the first time in his known existence, Booster Gold throws Skeets, his football-shaped companion, like a football.

Page 37, panel 5
"Week 52, Day 6." Through the combined efforts of Rip Hunter and Will Magnus, Skeets II lives again, though with no memory of the events occurring throughout issues of 52, including any knowledge of the DC Multiverse, which only Booster Gold, Rip Hunter, and Daniel Carter apparently share. All's well that ends well.

Boosterrific Review: After 51 issues, the secret of "52" is revealed, and Booster Gold remains as the unlikeliest hero to champion the cause of the Multiverse. This final issue of the series is part travel guide, part instruction manual for the modern DC Multiverse. While the resolution to the story may lack a clear cut explanation (Is Mr. Mind aware of the future? Can he change it?), it's a minor quibble when the story itself is based on a trip through time and inter-dimensional space. All in all, it is a very satisfying ending to an otherwise fantastic series.