This Day in History: Missing Fortune

Thanks to his long association with the Justice League, Booster Gold has crossed paths with many of the League's oldest returning villains, including Starro, Weapons Master, Amazo, Despero, and Doctor Destiny, just to name a few.

However, other villains have proven more elusive. Despite the number of times that Kanjar Ro has returned to challenge the League, Booster has never faced the threat of Ro's Gamma Gong. Nor has Booster had the opportunity to thwart the plans of Felix Faust or The Key.

True Booster boosters will know that the JLA villains Booster Gold has encountered the most are the Royal Flush Gang. Booster and the RFG first crossed paths in the superb Justice League #4, cover dated August 1987, and have renewed their association several times since, most recently in Power Girl #19 in 2011.

These days, the Gang is a group of thugs for hire, but they debuted as affiliates of one of the JLA's earliest foes, Amos Fortune. Despite Booster's long history with the RFG, our hero has never actually had the pleasure of meeting their original benefactor, even though Fortune has reappeared at least once a decade for fifty years now.

The closest that Booster Gold has ever come to tangling with Amos Fortune was in Justice League Europe #42, released on this date in 1992. While Fortune played the League's antagonist in that issue (and the one following), Booster appears in the issue only as part of an in-house subscription advertisement! 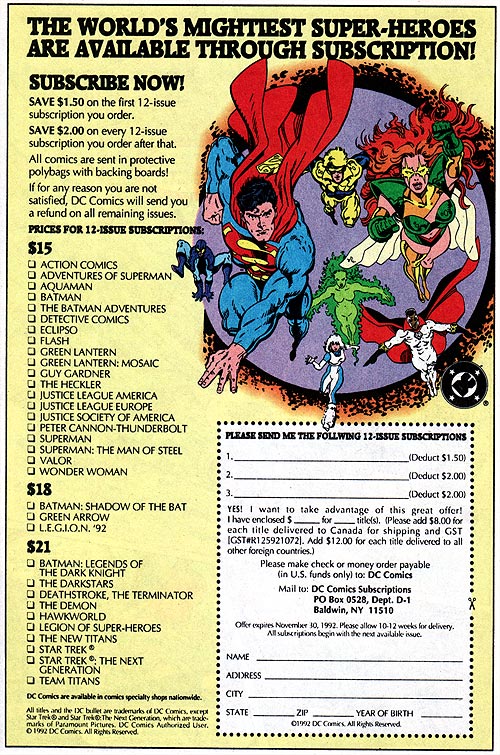 Close but no cigar, Booster! Keep at it, and maybe you'll find your Fortune some day.