Fame, Fortune, and the American Way

Source: "The Greatest Story Never Told," Justice League Unlimited (by way of every episode of The Adventures of Superman, because Booster Gold only steals from the best!)

My friend Michael Foster is always on the lookout for Boosterrific appearances that aren't on this site. Usually, I'm a step ahead of him, but yesterday, he struck gold.

Check out these panels from 1989's The Adventures of Superman #458: 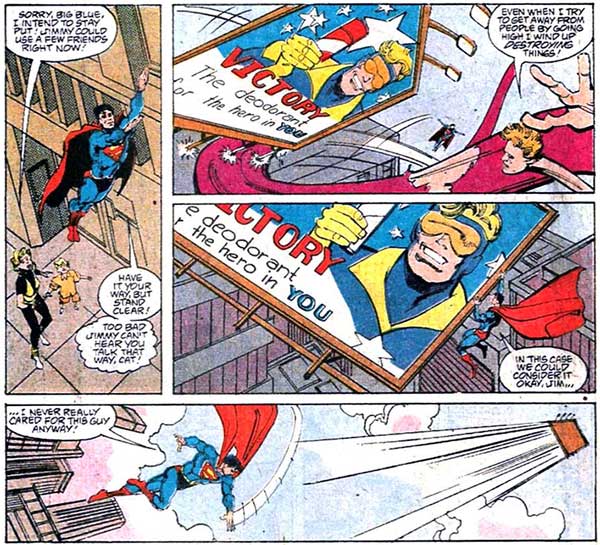 Not only is that an issue I didn't have, it's also a product endorsement I was previously unaware of. (Apparently, I've been using the wrong deodorant for years!)

Way to go, Mike. Thanks for helping make the Internet's number one Booster Gold reference site more complete than ever.

The one thing all great heroes have in common is a robust Rogues' Gallery. Unfortunately for Booster Gold, he's too efficient. He rarely fights anyone more than once. 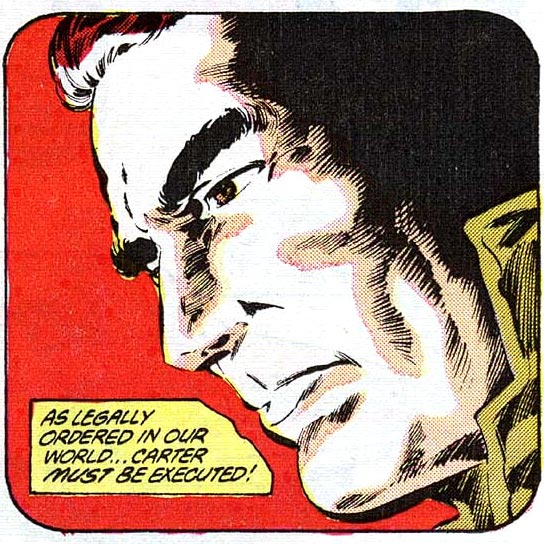 Among the few heroes to make a repeat appearance in the pages of Booster Gold is Broderick, the 25th-century cop who pursued wanted felon Michael "Booster" Carter back in time. Broderick had Booster Gold cornered in Booster Gold #18 before being distracted by a chance encounter with a liquor store robbery.

That was the last we saw of Broderick, but more than one fan has assumed that writer Dan Jurgens had intended for the character to play a bigger role in the series. Is there any truth to that conjecture? I decided to ask Jurgens directly.

Oh, Broderick was absolutely going to resurface. Had a very particular way it was going to work where, in true time traveler fashion, he'd pop up out of nowhere in the most unlikely of places.

In a way, he was the precursor to the first Linear Man story I did in

The Linear Man first appeared in Adventures of Superman #476 as a time agent trying to bring Booster Gold to justice. Hmm, yeah, I guess I can see the similiarity there. Fascinating.

A hearty thanks to Dan Jurgens for his cooperation in exploring the rich history of his creation, Booster Gold.

Herbert Fung posted on Jul. 26, 2015 at 1:20 AM
The pre-52U had several time dislocated characters that were forgotten, but Broderick was the one that had so much story potential.

It's Superman! The Adventures of Superman #476

Since Booster Gold had saved Superman's life in their last co-adventure, it was only fair that Superman return the favor when a murdering time-traveler came hunting Booster Gold. (That sort of thing happens all the time in Metropolis.) 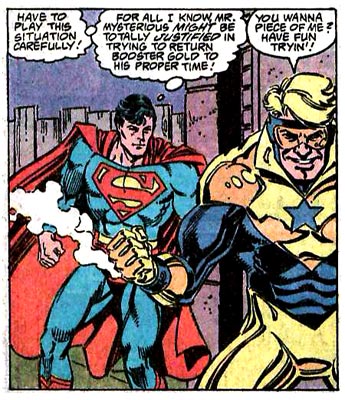 Booster's past/future deeds began catching up with him when the Linear Man seized and tortured Skeets in Adventures of Superman #476. Fortunately for Booster, Superman was ready and willing to get involved. Unfortunately for Superman, some forces of nature are best left unchallenged.

For his trouble, Superman found himself amnesic and lost, indiscriminately bouncing from era to era through time. In the present, Booster promised Lois Lane that he would seek out help for Superman, but readers never saw him follow through.

Did Booster ever contact Kilowog as promised? It is hard to imagine that Booster wouldn't keep his word, even though Superman did ultimately find his way home without Booster's assistance. Sometimes, it really is the thought that counts.