Herbert Fung has been going to the Calgary Comic & Entertainment Expo for years, and more often than not, he seems to bring back a Booster Gold commission from a superstar artist. It was Adam Hughes in 2013, David Finch in 2014, and Ty Templeton in 2016.

This year, Herb has outdone himself with this amazing Booster Gold commission from Tom Grummett: 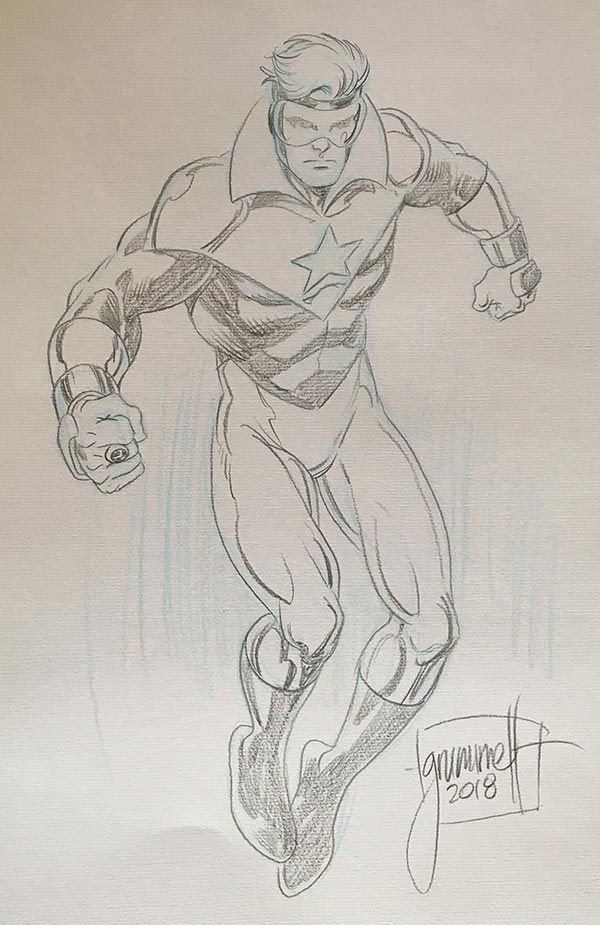 Grummett's credits are diverse, but I'll always think of him as THE artist for Superboy. After seeing this, I'm inclined to put him near the top of my list of Booster Gold artists as well.

Steven Palchinski posted on May. 5, 2018 at 10:22 PM
That is awesome Herb. Tom is from my home town of Saskatoon and my LCS owner is friends with him, so I was luck enough to get him to do a Superboy sketch cover on Action Comics 1000!

Today, a treat for those of you who may be interested in money, statistics, or the inner working of a fan website. Ads were added to Boosterrific one month ago yesterday, and the totals are in. In a month of whoring ourselves out Booster Gold style, we've earned... $1.08. Ads on Boosterrific are brought to you by Google, and Google won't even consider this an actual revenue-generating website until it has acquired $10 in credit. At the present rate, that's November 2010. However, Google won't actually cut a check until we've acquired $100 in credit. At the present rate, that's not until May 2018. So mark your calendars: come 2018, we'll be partying like it's 1999.

Phil posted on Feb. 27, 2010 at 1:49 AM
I just stumbled upon this site today, it's awesome. Definitely bookmark worthy for any booster gold fan. Keep up the good work

Boosterrific [Official Comment] posted on Feb. 27, 2010 at 8:35 PM
With Google Adsense the ad space here at Boosterrific is available for auction to the highest bidder via Google's Adwords program. So someone who thought that visitors to Boosterrific would make viable advertising targets would pay Google their bid price each time a visitor to Boosterrific clicked on an ad to travel to the advertiser's website. In theory Google would then kickback a percentage of that bid price to Boosterrific. So we make money when a lot of people come to Boosterrific and then click ads to travel to other people's websites.

The Amazon ads around the site are different. A visitor has to actually click the ad and then buy a product from Amazon for Amazon to offer any kickback. We've hosted Amazon ads for over a year with zero activity: some clicks, but nothing that has apparently lead directly to a purchase.

Ideally, the site should be partnered with comic book store advertisers, so that visitors could turn around and buy comic books that they see on the site. But Boosterrific doesn't yet generate the kind of traffic necessary to attract that kind of advertising. (Hence the implementation of the blog and comments in the hopes of luring more steady return visitors. Boosterrific.com: the slow path to world domination paying our bills one click at a time.)

tiggerpete posted on Feb. 28, 2010 at 1:29 AM
there are definitely some comics on here I don't have and would like to get, so links to comic sellers would be perfect, I would definitely be interested in that if it were available (plus I like this site, and would like to keep it going)

Boosterrific [Official Comment] posted on Feb. 28, 2010 at 2:57 AM
Back when I was young, supporting the things that you liked was the American (i.e. Capitalist) way to keep a business alive. These days, maybe I should mismanage this site into the ground and wait for a bailout. Don't worry, tiggerpete, I'm not planning on going anywhere. I didn't work my way up to become one of the world's foremost authorities on Booster Gold for nothing! (Apparently, I did it for $1.08!)