It's that time of year again when thousands of pop culture fans flood San Diego. That's right, it's time for Comic-Con! 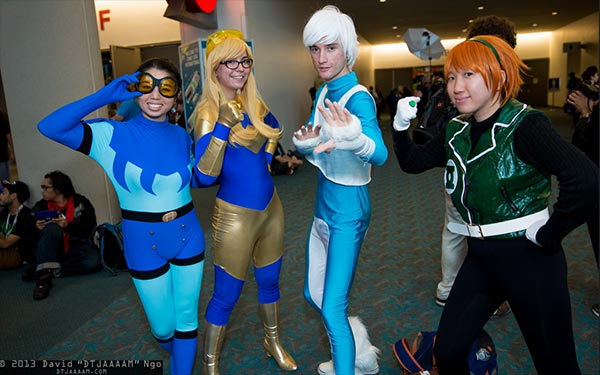 The picture above of a gender-flipped JLI was taken by David "DTJAAAAM" Ngo at last year's Comic-Con. You can find more of Ngo's cosplay pics at his website, www.dtjaaaam.com. Who knows what his lens will find this year? 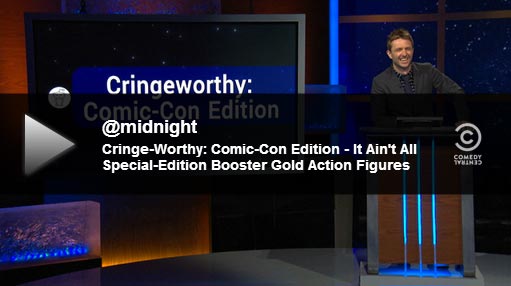 You can find the whole @Midnight episode online at cc.com. (Be warned. It's funny, but its got some salty language.)

I really wish I'd found this sooner:

On DeviantArt.com, cosplayer Vanessa takes credit for her role as a humanoid Skeets:

This is from about a year back [at Stan Lee's Comikaze Expo 2013] where my bf and I were Booster Gold and a humanoid Skeets at Comikaze. :D It was our first cosplay and we really didn't know what the hell we were doing. Only one person got that I was Skeets (lol), but after I told the admiring Booster Gold fans, they were very excited. I've never seen a Skeets cosplay, so I thought I was pretty darn original, and the people who got it loved it. The best part was that every time I sat down I would leave a glittering gold butt print. It was great.

What a great idea!

The photo was taken by David Ngo, whose cosplay galleries on Flickr.com are truly staggering. You can see more of Vanessa's ideas at Fatalist555.DeviantArt.com.

Morgenstern hasn't bought a DC comic in months, but he's still trolling the web for Booster Gold. And today he's found for us Dan Jurgens talking Booster Gold with Con Men at the 2013 Phoenix Comicon.

Asked whether or not Jurgens thinks Booster's pre-Flashpoint DCU memories survived the transition to the New 52 DCnU, he says, "[Booster] was outside time and space. Draw your own conclusions.... I think it's pretty clear."

Thanks, Morgenstern. (Also thanks to Con Men Interviews and, of course, Dan Jurgens!)

Good Help Is Hard to Find

Last Week's poll question: What are you most disappointed that you did not see Booster Gold doing in 2013? (45 votes)

Maybe you heard — perhaps either from Russ Burlingame at ComicBook.com or from MetalWoman in our own Boosterrific Forum — the news earlier this week that novelist Brian Keene had been asked to "do something with Booster Gold," an invitation that he had to refuse. You may recall that Jeff Katz worked in movies before working with Geoff Johns on Booster Gold Volume 2. How do we feel about another industry outsider writing Booster Gold comics?

I bet Booster gets a lot of gift cards from former Justice League International teammates.

Last week's poll question: What present do you get for the super hero who has everything? (34 votes)

Last year I asked you, "What do you most expect to see Booster Gold doing in 2013?" You answered "fixing Flashpoint with the Time Masters." I don't think any of us predicted 2013 being as bad as it was for our hero.