Boosterrific.com
>
Comics
>
Supergirl and the Legion of Super-Heroes #29

Supergirl and the Legion of Super-Heroes 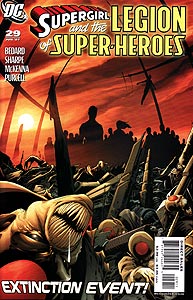 Cover Description: The Legion of Super-Heroes stands silhouetted behind the corpses of alien Dominators. (No Booster Gold.)

Brief Synopsis: The Legion of Super-Heroes launches an attack against the Dominator homeworld.

Issue Notes: Traveling through time, Booster Gold appears in this story at an indeterminate time during his chronology. Based on his costume, speech, and actions, as well as the publication date of this issue, it is most likely that Booster's appearance in this issue takes place sometime between weeks fifty and fifty-one of the title 52.

Issue Reprints: This issue has been collected in Supergirl and the Legion of Super-Heroes Volume 5: The Dominator War.

Page 10, panel 2
HIS STORY: Booster Gold arrives on the distant planet of the Dominator homeworld in the far future. Though Booster's actions are revealed as part of a flashback of events that had occurred approximately twelve years prior to "current" events, Booster was still present sometime in the 30th century, approximately 500 years after his birth. This is the first time that Booster has ever traveled to a point in the future outside of his natural lifespan. (Previously, in Booster Gold, Vol. 1, #13, Booster had returned to the 25th century just a few months following his original departure for the 20th century.)

Page 11, panel 2
Booster, who has traveled to the future to recover the Dominator weapon called a Tachyon Disrupter Rifle, comes face-to-face with the Dominators. Though the Dominators were among the alien races allied against the Earth during the Invasion! mini-series, Booster has never previously met one of their race.

Page 11, panel 3
FASHION ALERT: Booster's costume is free from any blemishes or advertisements. It also lacks the arm striping seen most recently in his Mark I.v2 armor. These changes are minor, and in all likelihood are simply the artists' choices or editorial oversights rather than legitimate changes in Booster's costume.

Boosterrific Review: Booster Gold plays a surprising and delightfully relevant role in the war between the Dominators and the Legion of Super-Heroes. Most of the issue is told from the point of view of the Dominators themselves, allowing for the rare occurrence of the reader sympathizing with one of the DC Universe's most reviled villains following an epic misunderstanding. For an issue focusing on an inevitable genocide, it sure is a lot of fun to read.