Superman: The Man of Steel

Brief Synopsis: Superman and the remaining heroes succeed in freeing the others from Brainiac's mind-control while Draaga sacrifices himself to save them all.

Page 2, panel 4
Booster Gold joins a squad of Brainiac's brainwashed heroes into battle against Superman. This is the second time -- possibly the third depending on whatever the Queen Bee's Bialyan unrevealed programming was -- that Booster has been brainwashed into attacking fellow heroes. Other heroes attacking Superman include Agent Liberty, Deathstroke, Elongated Man, Fire, Flash III, Guardian, Guy Gardner, Ice, Rocket Red #4, Straman V, and Valor. Like most of the pictured heroes, Booster is shown to be wearing a belt around his waist similar to the one that Lexcorp provided to Superman for breathable oxygen in space. 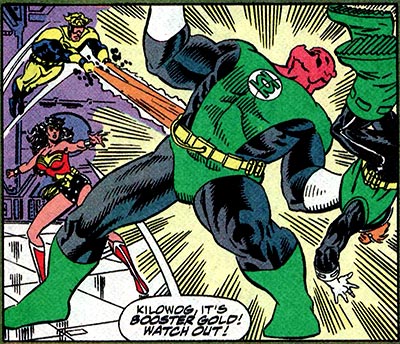 Page 14, panel 1
Booster Gold now battles the Metal Men. He is held in place by Platinum while his Booster Shot has no effect on Gold. Meanwhile, Lead, Iron, and Tin handle Deathstroke and Metamorpho. Mercury is not pictured.

Page 16, panel 4
An incapacitated Booster is carried away over the right shoulder of Wonder Woman, who also totes Elongated Man and Flash under her left arm. Others Though both Elongated Man and Flash clearly still wear their controlling helmets, Booster's thick blond hair makes it impossible to tell if his has been removed. Other heroes visible in the same panel are Captain Marvel, Guy Gardner, and the Metal Men.

Page 19, panel 3
Flash, Elongated Man, Metamorpho, Ice, and Booster are all freed from the controlling influence of Brainiac through the interference of Dubbilex, Kilowog, and Metron.

Boosterrific Review: This attractive issue features the art of Jon Bogdanove and Dennis Janke, which manages to bridge the gap between the style of cartoon action (Captain Marvel looks as though he were drawn by C.C. Beck himself!) and the realism of pin-up girls (Supergirl is equally adorable and sensuous as she throws punches). Otherwise there is little of substance here, as a minor character suffers the ultimate fate in order to artificially enhance the sensation of danger in a story that is beginning to feel a little stale.