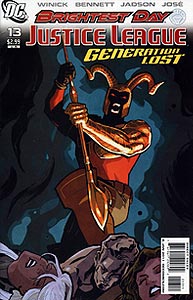 Cover Description: There are two covers to this issue: the standard cover by Cliff Chiang depicts Magog standing over Ice, Captain Atom, and Fire and the 1:10 variant cover by Kevin Maguire features only Maxwell Lord. Neither cover includes Booster Gold.

Brief Synopsis: Captain Atom fights for his life against Magog.

Page 2, panel 2
Magog was a Lance Corporal in the United States Marines, meaning that he was an enlisted man and well below the rank of officer. Captain Atom, however, was a commissioned Major in the United States Air Force. Despite the rank difference, an Air Force Major has no normal right to issue commands to a Marine Lance Corporal because the two are in different chains of command in their separate armed forces (although being in the thrall of Max Lord may be considered being "detained by a hostile entity" and preventing the ordinary function of the chain of command per Article 89 of the Uniform Code of Military Justice).

Page 4, panel 1
Exactly 18 minutes have passed since the events in Justice League: Generation Lost #12. Booster Gold, Blue Beetle, and Captain Atom have been ambushed by a Maxwell Lord-controlled Magog in the Checkmate base in Chicago. In those 18 minutes, it would appear that Skeets, who had accompanied the trio to Chicago in Justice League: Generation Lost #11, has left the building: Booster's robot sidekick does not appear in this issue.

Page 9, panel 4
At Captain Atom's insistence, Blue Beetle evacuates Booster Gold from the battle site. This is Booster's last appearance in this issue.

Page 14, panel 5
Captain Atom is essentially comprised of sentient quantum energy, not nuclear energy. This is a subtle distinction that has long been ignored by writers, possibly intentionally for dramatic effect. Being quantum powered is what enables Atom's trips through time and space, whereas were Atom simply nuclear powered, he'd merely be more or less radioactive given the amount of energy he absorbed. This change in interpretation of Atom's powers can be tied directly to his appearance in Kingdom Come.

Page 16, panel 1
WARNING: This book has not been approved by the Comics Code Authority.

Page 18, panel 4
WARNING: This book has REALLY not been approved by the Comics Code Authority.

Boosterrific Review: Yet another issue in a series that should really be renamed Justice League: Hero vs. Hero. Though story dilation continues unabated -- given the amount of story in this issue, the page count could easily be trimmed down to 12 pages with no loss of action or detail -- at least this issue significantly advances the storyline in the aftermat of its slugfest between Captain Atom and Magog, generating a real excitement about future events.

(3 votes)
KMD (Nov. 17, 2010, 11:15:49)
Wow. I generally do not care for issues dominated by non-stop fight scenes but over-the-top violence but this was interesting. Max Lord is now one of the chief villains in the DC pantheon. Glad to see one of the most unlikable heroes in DC exit stage left.
Erin (Nov. 13, 2010, 14:32:53)
Although it made for a really short read this issue served a lot of purposes for the plot. Max completes one stage of his plans, for the first time someone is able to break through the mind hold and the stakes are raised higher.
Harry (Nov. 12, 2010, 15:40:14)
I liked reading this issue. Gratuitous violence makes it a no-no to read to my 5 year old, but was ok for the story and intended effect. I am hoping now that the Brightest Day obligation is done that we can now move on to the Max Lord story at hand. Decompression is hurting the pacing of this series.