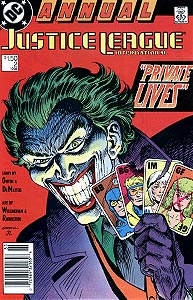 Page 1, panel 1
Among the many things that makes this story difficult to place in proper chronological context are small changes to continuity, such as the narration box on the first panel which claims that Maxwell Lord's Innovative Concepts Building is in New York City. Until this point, Maxwell Lord's headquarters has been in Washington, D.C.

Page 7, panel 6
Catherine Cobert forgives Booster for the incident in Paris during their first meeting in Justice League International #8. Booster admits to Beetle that she scares him.

Page 7, panel 8
Booster and Beetle discuss their financial situations: they are both nearly penniless. Booster's company and fortune were stolen from him by the Manhunters in Booster Gold, Vol. 1, #23. Beetle gave his company and his wealth to his father in Blue Beetle #24. Now both live in JLI embassies and live off JLI paychecks. 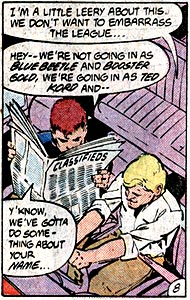 Page 8, panel 6
Booster and Beetle hatch their first paying scheme: become super-powered repo-men for a repossession firm for a percentage of the collection fee. Booster is leery of sullying the Justice League's name with their plans. This is a sentiment born of his respect for the Justice League, a sentiment that will soon pass.

Page 12, panel 1
Booster and Beetle approach Repo Man, Inc. with their idea. Repo Man was the name of a 1984 comedy movie featuring young actor Emilio Estevez which soon earned something of a cult following.

Page 18, panel 6
Booster and Beetle find the missing S.T.A.R. Labs combat unit amid several wooden crates marked "Power Dog Pet Food," in a warehouse owned by the 1000, the same criminal organization that he spent his earliest days as a crime fighter opposing. "Power Dog" is suspiciously similar to "Mighty Dog," a brand of dog food manufactured by Nestle Purina PetCare (formerly Carnation) since 1973.

Page 21, panel 2
HIS STORY: While repossessing the combat unit, Booster tells Beetle that he is an atheist. It is unclear whether this is honesty or offhand levity.

Page 29, panel 1
Rather than turn the combat unit in for the collection fee, Beetle decides to use it as transportation for the pair plus Green Flame and Ice Maiden I to Mister Miracle's & Big Barda's cookout (against Booster's recommendation)...

Page 31, panel 5
...where it is stolen by the Joker. This pattern of Beetle and Booster successfully completing a difficult job for cash only to have it fall apart on them will be a recurring theme in future issues. By the way, this is the first published meeting between the Joker and Booster Gold (though the two will later come face-to-face in Booster Gold, Vol. 2, #5 which takes place during the events of Batman: The Killing Joke, which was also published this month).

Boosterrific Review: It should be a crime for assassination attempts engineered by a homicidal psychopath to be this entertaining. Read and enjoy.

(1 vote)
BoosterPowershot (Nov. 28, 2010, 10:49:41)
I thought this was a pretty entertaining issue, and there's a scene in it which that brings out the evil nature of the Joker rather disturbingly. Coincidentally, the destruction on both BB and BG's cards is eerily similar to the events that happened to them both during Countdown to Infinite Crisis. Blue Beetle wound up with a gunshot wound, and Booster had been burned in the prior explosion. You could even go so far as to say that Ice's tear is represented in her split personality we recently uncovered in JL:GL. Have the more recent writers been going back to the cover of this issue for the fate of the JLIers? And if so, is this a clue as to what will happen to Fire? (Methinks a crucifixion?)