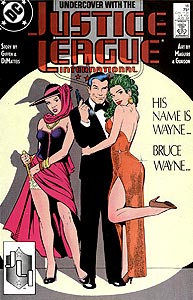 Cover Description: Bruce Wayne stands in the middle of a spotlight wearing a tuxedo, holding a gun, and casting the shadow of the Batman. On his left is Green Flame and on his right is the Queen Bee II. (No Booster Gold.)

Brief Synopsis: While Martian Manhunter leads a rescue mission for Mister Miracle into deep space, Batman leads a covert operation into the hostile nation of Bialya.

Page 3, panel 2
Batman chooses Booster Gold, Blue Beetle II, and Green Flame to join him on an undercover mission to Bialya. It remains a mystery why Batman thought that Booster, whose face has adorned nearly every product made, would make a good undercover agent.

Page 4, panel 1
Booster is having a bout with airsickness. Though he has flown private planes several times before with no apparent nausea, he has never before been shown to fly as a passenger in a large commercial plane. (Though the plane shown in panel 1 appears to be a mid-range, twin-engine Boeing 737, the one in panel 2 looks more like a long-distance, 4-engine Airbus A340. Perhaps the Leaguers changed planes?)

Page 5, panel 3
While Batman is undercover in the borrowed identity of Bruce Wayne ("He owed me a favor."), Green Flame is masquerading as Bitsy O'Brien, Booster is Bharjwarj, and Beetle is George Bailey, the character portrayed by actor Jimmy Stewart in the classic film It's a Wonderful Life.

Page 8, panel 6
Manga Khan addresses robot S-3-E-3, who is clearly named in reference to the popular robot R2D2 from the movie Star Wars. The recent references to Star Trek and Star Wars will combine when...

Page 14, panel 9
When Booster laments that his undercover assignment is not as interesting as that of movie spy James Bond, Beetle compares the pair to Lou Abbott and Bud Costello, a pair of twentieth-century comedians remembered primarily for their slapstick gags and enduring "Who's on First" routine. Beetle doesn't make clear which one of them is Abbott, the straight man, and which is Costello, the bumbling stooge, though one can guess.

Page 16, panel 4
Abdul Abdullah Abdul tells Batman that Booster and Beetle were gassed and removed from their quarters. Though this seems insignificant at the time, it will turn out to be more significant that it first appears.

Boosterrific Review: After some seriously shaky missteps in recent issues, the writing team of Keith Giffen and J.M. DeMatteis return to their strengths in this issue featuring terrific characterization, subtle humor, and international intrigue. This is the style that the globe-trotting Justice League International has been built upon, and here it is clear to see why. Great fun.