“The Purge, Chapter 2: To Say Goodbye” 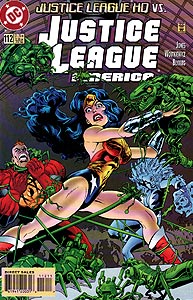 Brief Synopsis: The Justice League America struggles to survive against Lord Havok aboard their space-bound Refuge.

Issue Notes: This is the penultimate issue of this series, canceled to allow for a relaunch of the Justice League franchise by writer Grant Morrison in the series JLA.

Page 9, panel 2
Wonder Woman arrives at the Mount Thunder headquarters of Captain Atom's faction of the Justice League seeking help for the members of her team trapped aboard the orbiting Refuge. Leaguers present include Amazing Man II, Blue Beetle II, Booster Gold (with built-in Skeets), Captain Atom, Firestorm V, and Maxima. Also present is Carol Ferris, president of Ferris Aircraft, and Operations Manager of Mount Thunder (as of Extreme Justice #10). Despite both regularly appearing in Extreme Justice, this is Booster's first on-panel appearance with Ms. Ferris.

Page 15, panel 1
Members of the various Justice Leagues (JLA, Extreme Justice, and JLA Task Force) assemble in Mount Thunder to deal with the troubling issue of the orbiting JLA Refuge's departure from Earth orbit with members of the Justice League aboard. More than 14 members of the JLA re present for the "meeting," although it is new Green Lantern Kyle Rayner (who is not yet an official member of the Justice League) who is expected to single-handedly solve the problem. In the room are Amazing Man II, Blue Beetle II, Booster Gold, Captain Atom, Carol Ferris, Firestorm V, Flash III, Gypsy, Hawkman IV, Martian Manhunter, Maxima, and Wonder Woman. This is Booster Gold's last appearance in this issue, and he has no dialogue.

Boosterrific Review: There's a lot going on in this issue that will be confusing to readers unfamiliar with contemporary events within the DCU, but they are only small distractions from the overall story of the JLA battling an old foe.