“Opening up the Game” 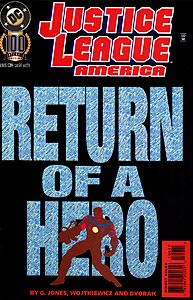 Cover Description: There are two covers for this issue (one featuring Lord Havok against the Justice League and one featuring the silhouette of Guy Gardner: Warrior). Neither cover includes Booster Gold.

Brief Synopsis: The multiple Justice Leagues meet and investigate the orbiting ship that once belonged to the Overmaster. 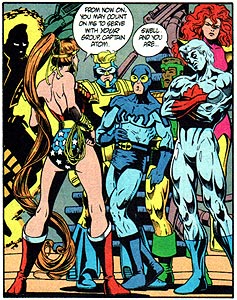 Page 5, panel 2
Beetle and Booster tease Artemis IV about calling herself Wonder Woman (II). The Amazonian Artemis won the role of Wonder Woman, representative between the Amazons and "Man's World," from Princess Diana during a contest in Wonder Woman, Vol. 2, #92.

Page 6, panel 2
Beetle and Booster are introduced to the Yazz. Yazz is the last member of his race, and something of a handyman aboard the Overmaster's abandoned escape pod that has become the headquarters of Wonder Woman's Justice League America known as the Refuge.

Page 11, panel 2
While exploring the Refuge, Blue Beetle, Booster Gold, Flash, Hawkman, and Yazz discover the habitat designed for Ice. Like the biblical Noah, the Overmaster was determined to gather every species on Earth. Apparently, the representative of homo sapiens that Overmaster had selected was the Justice League's own Ice, who isn't homo sapien at all, but rather a member of a unique Nordic race with godlike powers.

Page 20, panel 1
Continuing their exploration, Booster and company come across a warehouse of inert, giant robotic bodies for the Overmaster to occupy. It seems that the Overmaster changed bodies like Booster changes powersuits.

Page 23, panel 4
Distracted by a malfunctioning manufacturing robot, Blue Beetle, Booster Gold, Flash, Hawkman, and Yazz are subdued by Lord Havok III, the former leader of the Extremists melded with the mind of Maxwell Lord by Lord's original manipulator, the Kilg%re.

Page 39, panel 2
Booster is surprised to discover that Diana's "'open door' policy" has led to assaults from at least three villains. Booster should know from experience that villains are always gunning for the Justice League. In fact, it was the Royal Flush Gang's assault on the Secret Sanctuary that first earned his admission into the League in Justice League #4.

Boosterrific Review: The cover should probably be considered something of a bait-and-switch tactic, as the promised "return" doesn't take place until the last page of the issue. Instead this issue focuses on the League's battle with another one of their own. Fortunately, the issue is benefited by the cartoonish but clear and detailed art of Chuck Wojtkiewicz, Dvorak & Selogy, and Gene D'Angelo.