“All The King's Men” 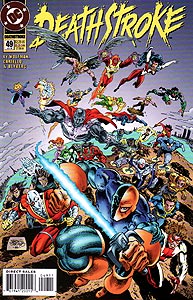 Brief Synopsis: Checkmate is aided by most of the DC Universe's hero teams in an effort to find and disarm nearly two dozen hidden nuclear bombs.

Issue Notes: Booster Gold never meets the titular character of this issue, Deathstroke, within the pages of this comic book. 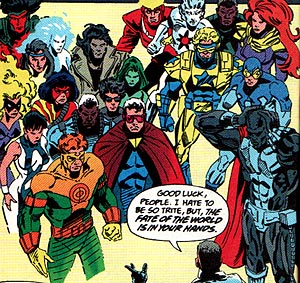 Page 11, panel 5
Booster Gold appears in a video conference called by Sarge Steel, one of the two Checkmate Kings. Checkmate is a United States government agency designed to oversee and manipulate international law enforcement. Checkmate needs the assistance of the heroes to scour the country and uncover nuclear bombs placed by the villainous Crimelord. Other heroes and teams involved in the virtual reality conference are the Blood Pack (Ballistic, Jade, Mongrel, Nightblade, and Sparx II,) Hawkman IV, Deadshot, the Justice League West aka Extreme Justice (Amazing Man II, Blue Beetle II, Captain Atom, Firestorm V, and Maxima), the Ousiders (Eradicator II, Faust, Geo-Force, Halo, Technocrat, and Windfall), and Steel III. It is not clear whether the heroes can all see one another or not. This is Booster's first encounter with Sarge Steel and Checkmate.

Page 17, panel 5
In Extreme Justice #0, it was Booster Gold who was exuberant about the idea of visiting the Las Vegas casinos. Now inside a casino, it is Beetle who can't control him self from gambling despite the fact that the team is in search of a nuclear bomb. While Booster tries to control Beetle, Atom, Firestorm, and Maxima work together to complete their mission.

Boosterrific Review: The confusing story by Marv Wolfman is part of a much larger tale that seems determined to include as many characters as possible for very little reason. The confusing art by Sergio Cariello, William Rosado, and Will Blyberg seems determined to make the colorist work overtime so that readers can differentiate the many indistinctly drawn characters. All around, this issue qualifies as a lackluster effort that is probably best avoided.