“Do the Right Thing” 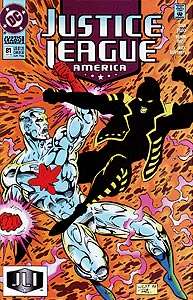 Brief Synopsis: The Justice League gets caught in a custody battle between the United States and the alien Kerrilian race.

Page 3, panel 1
Captain Atom and the Peacekeepers Cinder, Crater, and Zach face off against Wonder Woman and her Justice League companions, Booster Gold, Guy Gardner, Maxima, and Ray II for the custody of the aliens Blake and Corbett. This is Captain Atom's first interaction with the League since he disappeared through time with Monarch at the conclusion of the climactic battle of Armageddon 2001 #2.

Page 5, panel 1
As the two teams launch into battle, Booster is left behind to guard Blake and Corbett. 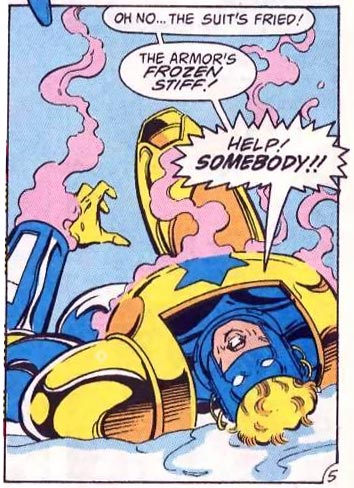 Page 5, panel 3
Booster charges into action in his new armor...

Page 5, panel 4
DON'T MAKE 'EM LIKE THEY USED TO: ...only to be hit from behind by an unexpected energy blast, courtesy of Captain Atom, that completely fries the armor's electrical system leaving Booster immobile and helpless. Mark II Booster Gold 0, Enemies 2. Captain Atom, feeling slightly guilty, does promises himself to make it up to Booster some day.

Page 15, panel 4
POWER DOWN: Booster lies on the Justice League's circular meeting table, stuck inside the inoperable armor, while Maxwell Lord and Wonder Woman discuss the current situation and generally ignore him.

Page 19, panel 1
Freed from the broken armor, Booster helps Blue Beetle II evacuate the tourists from the Justice League Headquarters in advance of an impending confrontation with Captain Atom and the United States Government over the Justice League's sanction of Blake and Corbett. Both Beetle and Booster appear to be wearing t-shirts and caps available in the Justice League gift shop. (That Wonder Woman's Justice League now has a gift shop, something that even Maxwell Lord never achieved, is the sort of thing that never would have happened on Martian Manhunter's watch.)

Boosterrific Review: Justice League members fight amongst themselves over ideological differences and the fate of aliens of questionable ethics. It seems that writer Dan Vado is interested in exploring some weighty issues in the guise of a super heroic brawl. However noble Vado's goal, it lacks something in execution as it fails to be either a rational exploration of morality or an above average action-oriented super hero comic story.