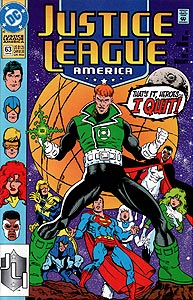 Cover Description: Guy Gardner stands on an alien surface and defiantly resigns from the Justice League. Standing in the background reacting are, from left to right, Booster Gold, Blue Beetle, Superman, Ice, Bloodwynd, and Fire. Along the left side of the page near the spine, serving as a role-call of characters in the team, are head shots of Leaguers, from top to bottom, Superman, Blue Beetle, Booster Gold, Maxima, and Bloodwynd.

Brief Synopsis: The arrival of a messenger from the planet Almerac sends the Justice League on an intergalactic journey.

Page 2, panel 1
FASHION ALERT: Booster stands with his fellow Justice Leaguers Bloodwynd, Blue Beetle II, Fire, Guy Gardner, Ice, Maxima, Maxwell Lord, and Oberon as Maxwell unveils their new United Nations sponsored headquarters on Manhattan's East River in New York City. Booster's hair is considerably longer than it was in the previous issue, indicating that some time has passed between issues. This is the first significant change in Booster's hair since Dan Jurgens shortened it back in Booster Gold, Vol. 1, #11 in 1986.

Page 6, panel 4
As Maxwell Lord shows Blue Beetle and Booster Gold to the underground lab of their new headquarters, they pass a "new Bug" built by Kilowog for Beetle. This design is not new; it is actually a return to the design of Blue Beetle's original Bug as shown in his pre-Crisis on Infinite Earths (and pre-DC Comics) Charlton days, when the character was drawn and written by Steve Ditko.

Page 9, panel 4
When Maxima announces that she has to return to Almerac, Booster refuses to offer assistance. This is more likely due to his dislike of Maxima, who spurned his advances in the previous issue, than anything else.

Page 15, panel 1
Booster Gold and the newly arrived Superman argue about the wisdom of traveling to Almerac to aid Maxima. Booster takes the position that the Justice League has no business overthrowing foreign governments (though Booster did just that as head of the Conglomerate in Justice League Quarterly #1), and Superman argues that the League has universal values to uphold. This is a complete 180 degree position shift for both characters who had the same argument from the opposite positions in Booster Gold, Vol. 1, #7. That issue was also written by Dan Jurgens.

Page 16, panel 5
Booster is excited about traveling to another planet. This will be the second planet that Booster will have visited besides Earth, assuming that the mobile Warworld in near-Earth orbit doesn't count.

Page 20, panel 1
When Guy Gardner makes the ultimatum that the Justice League has to choose between him or Superman, Booster cannot look Gardner in the eye as he sides with the rest of the league in favor of Superman.

Page 22, panel 1
Appearance of Starbreaker, an energy vampire previously defeated by the combined might of the Justice League in Justice League America, Vol. 1, #97.

Boosterrific Review: What is most surprising about this issue is writer Dan Jurgens' ability to rotate through the individual subplots of each member of the League without losing pacing for the issue's primary action. Every character gets a chance to contribute to the story in unique and amusing ways. This Justice League is truly a team book that succeeds on the strength of its members.