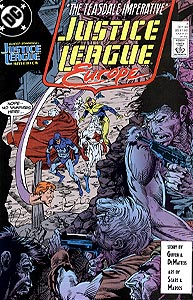 Brief Synopsis: The JLA and JLE join forces to combat a plague spreading across Europe.

Issue Notes: This is the second book in a 4-part crossover with Justice League America collectively titled "The Teasdale Imperative."

This story has been reprinted in:
Justice League International Volume 6 (2011) 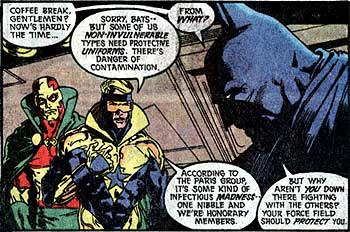 Page 5, panel 5
Booster returns to the JLI shuttle to collect a containment uniform, not to protect his body from the rampant spread of an unknown contaminant turning people into madmen - his force field could do that - but to hide from the smell. As has been previously demonstrated, ample supplies of oxygen can pass through the force field, and so apparently can scent bearing molecules.

Page 6, panel 3
Fire uses her new found ability to become "living" flame for the first time in a battle alongside Booster, though this power has little effect against the "vampires" that the League is combating.

Boosterrific Review: For being a spin off of Justice League International, Justice League Europe is really more of the same. Although when the same is this good, more is a good thing.

The Justice League confronts a major threat in this issue written by the same team (Giffen/DeMatteis) as its sibling series, so the pitch perfect combination of action/character development/humor should come as no surprise. The art of Bart Sears is both distinctive and nuanced, similar enough to art in its sibling title while still establishing a distinct artistic identity. Everything a Justice League comic book should be, no matter where in the world it is set.