“Too Fast to Save the World” 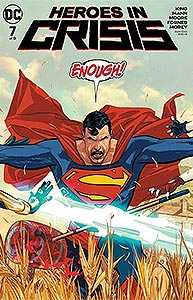 Issue Summary: Harley Quinn attacks Booster Gold. She is incapable of getting through his force field until Batgirl realizes that Blue Beetle is supporting Booster's technology and incapacitates him. Realizing he is defenseless, Booster admits he probably deserves what is coming and waits for the killing blow. It does not come. Harley collapses beside him.

Meanwhile, Batman and Barry Allen search the world for evidence as to Booster and Beetle's whereabouts.

Meanwhile, Wally West grows a clone of Poison Ivy from the rose Harley Quinn threw into the river in issue #2.

Issue Notes: Superman appears on this cover but he appears nowhere within its pages.

Page 4, panel 1
Picking up very shortly after issue #5 left off, Harley Quinn ambushes Booster Gold, shattering her mallet on his force field. Batgirl and Blue Beetle look on as the other resolve their differences through combat. (It remains unclear why Batman protege Batgirl has allied herself with known murderess Harley Quinn. [And I don't mean we know she killed anyone at Sanctuary. Harley has killed plenty of people in her own ongoing series.])

Page 8, panel 1
Both Harley and Booster insist they saw the other kill at Sanctuary. This may be a case of not being able to trust their own eyes.

Page 9, panel 4
POWER DOWN: Beetle explains that Booster's force field hadn't been working (as noticed in issue #1) and he repaired it by tying the force field to the Bug's operating system. Since the bug is controlled by Beetle's own consciousness, Batgirl deactivates Booster's force field by knocking Beetle out. (Is that how the Bug works now? How does Batgirl know that? And again Batgirl aids Harley despite Harley vowing to kill Booster. Does Batgirl want Booster dead? Why would she side with the Joker's sidekick against a former Justice Leaguer? Who is this villain wearing Batgirl's costume? Is it the Black Beetle? I bet it's Black Beetle.)

Page 13, panel 4
Rather than fight back (he should still have his super strength and flight ring among other powers), Booster succumbs to his own doubt and insecurities and surrenders to whatever fate Harley plans for him. Poor guy. It's easy to empathize with his depression. He's had it pretty rough recently, first in "The Gift" and now in this series. But at least he has Beetle again, right? Oh, wait. This incarnation of Booster never lost Beetle. Never mind.

Page 15, panel 1
Fortunately for our hero, Harley Quinn is just as messed up as he is. More, actually. She actually did lose her best friend recently. And now she can't bring herself to murder people anymore. Poor girl.

Page 20, panel 1
Having finally hashed out their differences and realized that perhaps they are both wrong, Booster and Harley (and Beetle and Batgirl) agree to work together to finally solve the mystery of Sanctuary.

Boosterrific Review: I've decided that Heroes in Crisis is the anti-Extreme Justice. It looks great but has nonsensical characterization, an impenetrable plot, and glacial pacing. I should be super stoked that Blue and Gold are back together, but I remain entirely unconvinced that anything happening herein has any connection to any sort of ongoing DC continuity.