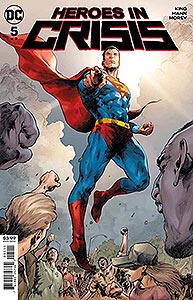 Brief Synopsis: Booster Gold continues the investigation into the true identity of the Sanctuary Killer.

Issue Summary: After Batman fails to convince Skeets to tell him where Booster Gold is hiding, Batgirl and Harley Quinn try a different, more violent interrogation. Meanwhile, Superman and Wonder Woman give a speech to the general public meant to calm their fears about the existence of Sanctuary.

Elsewhere, Booster Gold and Blue Beetle ambush the Flash to get their hands on the evidence of the Sanctuary murders. Using his knowledge of the methods of "time-travel police," Booster ascertains that the corpse of Wally West is five years older than it should be.

Page 1, panel 1
HIS STORY: In his video-taped confessional, Booster Gold references events in "The Gift," a story that concluded in Batman Volume 3 #47. Booster's behavior in that story was very... off model. (It is not recommended reading for Booster Gold fans. That departure in characterization served no greater story purpose other than to rationalize Booster's inclusion in this series.)

Page 2, panel 1
Booster Gold drinks eats pizza and drinks beer with old friend Blue Beetle. This isn't particularly integral to the plot, but it does give me an excuse to show the issue's spectacular two-page title illustration by Clay Mann. 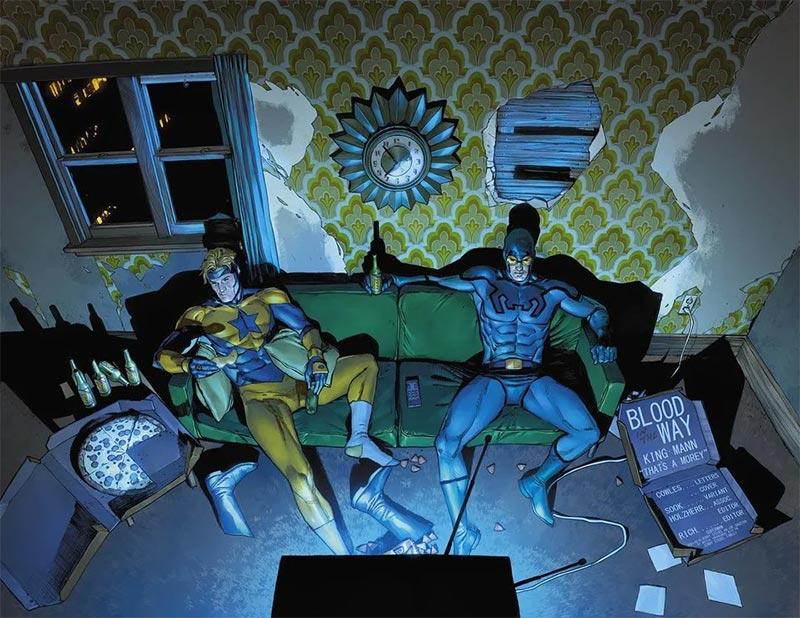 Page 6, panel 2
Skeets has fallen in with Batman and Batgirl, who want to know where Booster Gold is hiding.

Page 11, panel 2
Skeets cusses uncharacteristically. Not that there is a characteristic way for him to cuss. What I mean is, Skeets doesn't cuss.

Page 13, panel 4
POWER UP: Booster Gold uses his Booster Shots to take down The Fastest Man Alive (who inexplicably stands still long enough for it to happen). Then Booster cusses, too. Unlike Skeets, Booster Gold probably cusses a lot.

Page 15, panel 4
MEET THE PRESS: In his nationally televised speech, Superman confirms to the public that Booster Gold is "wanted for questioning concerning the" Sanctuary killings. Booster's golden rule: the only bad press is no press.

Page 16, panel 2
HIS STORY: Has Rebirth changed Booster Gold's backstory again? When last we saw his New 52-era origin in Convergence: Booster Gold, Booster had no relationship with the Space Museum or its exhibits on heroics. When Booster Gold guest-starred in post-Rebirth Action Comics #993, he was very much working with "those prudes," the time travel-police. Compounding that problem, neither New 52 nor Rebirth Booster has an established relationship with Blue Beetle Ted Kord, so what are they doing together in this issue? (It's enough to make anyone attempting to chronicle Booster Gold's history pull out his few remaining hairs!)

Page 23, panel 1
Just after using his unique knowledge of time travel, police work, and DC's super heroes to unveil the clue that may be the key to solving the Sanctuary killings — an act which finally justifies his inclusion in this murder mystery— Booster Gold is confronted by Batgirl and Harley Quinn.

Boosterrific Review: It's finally clear why Booster Gold is in this series as our hero finally uses his brains to push forward a story stuck in neutral. While most of this issue consists of Superman's rousing speech advocating for the support of heroes with PTSD, the real star is the beautiful art of Clay Mann.