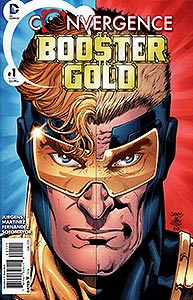 Page 10, panel 5
After freeing Booster Gold and his sister, Goldstar, from the prison in Skartaris, Rip Hunter calls Booster "dad" and reveals that he's dying. So much has happened since Flashpoint!

Page 11, panel 1
Booster denies that he is dying. If Booster has aged enough that he has now become the Time Master who has already established Vanishing Point and fathered a young Rip Hunter (see below for rationale), maybe he knows something we don't.

Page 11, panel 2
Rip Hunter explains that Booster has absorbed an overdose of chronal energy (from "years" of time travel). It is this overdose that has sent Booster hurtling not through time but across the time-displaced cities on the surface of Telos, the sentient planet that Brainic moved to Vanishing Point. (For details about these travels, see Booster Gold Futures End #1.)

Page 11, panel 3
If Booster's only "bounce" through time took him to the New 52 Universe (as seen in Justice League International Annual #1), does this mean that his adventure with Jonah Hex in the Old West (as seen in All-Star Western #19) took place on Telos?

Page 11, panel 5
Rip Hunter explains to the New 52 Booster Gold that his older counterpart corresponds chronologically with a Rip Hunter who would be about 15 years younger. That makes "original" Booster much older than he was at the end of Booster Gold #47. That Rip Hunter thinks he is dying implies that this Booster is older than the Time Master Booster Gold dressed as Supernova in the pages of Time Masters: Vanishing Point.

Page 12, panel 3
Booster Gold is clearly proud of the work he's done as a time policeman. While he has certainly made a difference, I wonder if he remembers his failure in Flashpoint?

Page 15, panel 3
POWER DOWN: After Booster disappears from Skartaris. New 52 Skeets explains that Booster Gold has come unstuck in time, causing him to bounce between the many time-lost cities on Telos. He may have started in Skartaris, but he's soon sent to ...

Page 22, panel 1
... Metropolis of the pre-Flashpoint era where he meets a very familiar and welcome face.

Boosterrific Review: I know I'm biased, but this issue is the cream of the crop of the Convergence tie-in mini-series. Paradoxically, it is at the same time impenetrable to new readers. (Back in the day, it was assumed new readers would jump in with both feet and pick up the myriad characters and locations in the DCU as they went along, but these days, it seems it's almost a crime to pack a new issue full of dense, wall-to-wall storytelling.) My biggest gripe about the issue is how several passages seem to be setting up the end of a character I've been reading for thee decades. That's... uncomfortable. Otherwise, a very good read.