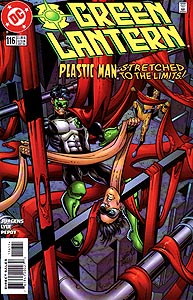 Issue Notes: The guest writer for this issue is Dan Jurgens, so it should be no surprise that the guest hero is Jurgens' own creation, Booster Gold.

Page 2, panel 1
Green Lantern Kyle Rayner chastises Booster Gold for shipping a parcel without knowing its contents. In fact, no major American shipping service demands to know the specific contents of any domestically shipped package. Though certain items are illegal to ship and all shipping services reserve the right to inspect any package, including via automated electronic inspection systems, the customer's right to privacy is generally respected.

Page 4, panel 2
POWER UP: Booster tells Rayner that his force field technology is 25th-century technology, "though Blue Beetle and a couple of others have had to repair it with current tech." Booster's Mark XI costume, which contains the software of companion Skeets, is most recently supplemented by S.T.A.R. Labs Technology obtained through a Freedom of Information Act (FOIA) request via the United States Department of Extranormal Operations (DEO), as revealed in DCU Heroes Secret Files #1. The Freedom of Information Act is a federal law enforcing the public's right to receive government documents.

Page 11, panel 5
Contemplating a partnership with Green Lantern, Booster Gold comments that "Green and Gold sounds like school colors." In fact, by the year 2007, only three of the nationally recognized NCAA Division I-A Football schools use the colors green and gold as their official colors (Baylor, Colorado State, and South Florida) while nine schools use some variation of blue and gold (Akron, California, Kent State, Navy, Notre Dame, Pittsburgh, Toledo, UCLA, and West Virginia). That's a three-to-one ratio in the national college ranks.

Page 12, panel 1
Booster and Rayner burst into the headquarters of the Supplier, who is torturing Plastic Man. Booster's yell, "Luuuuucy! I'm Hoooome!" is a line borrowed from the beloved 1950s I Love Lucy television show. The line, as commonly spoken by Lucy's husband, Ricky Ricardo, has become a popular catchphrase in the decades since the show first aired, usually spoken when notifying someone of your arrival.

Page 17, panel 3
Booster and friends destroy the facade of Dooley's New York Bar and Grill. The name of this establishment and the visage of the businessman out front are references to Kevin Dooley, editor of this issue.

Boosterrific Review: This issue has everything: action, laughter, danger, and, unfortunately, an unsatisfying ending. Writer Dan Jurgens provides an exciting and enjoyable story for most of the book, only to have the heroes stymied and inexplicably thwarted in the last pages. Certainly, this lackluster ending damages what is otherwise an extremely enjoyable reading experience.