Brief Synopsis: Captain Atom's Justice League takes the time to reflect on recent events and the direction of their team.

Issue Summary: Somewhere (presumably in Nevada), some young men (presumably younger than the legal drinking age but old enough to drive) have secured alcohol. They drive off in their truck, looking for a place to party.

Defeated, the ruling Exorians return to their planet, leaving the Flesh-Driver in teh care of Jan and Zayna (and Booster Gold).

Meanwhile, the Extreme Justice team has yet another meeting about what their mission statement should be. Ultimately, the members all agree that they should be more proactive about preventing "supercriminals and volatile political situations." The meeting soon turns into an intervention for Firestorm, who refuses to admit that he has a drinking problem. Firestorm storms out of the meeting, passing the teens seen earlier who are now drunk driving on mountain roads.

Amazing Man and Maxima settle in to watch some television. Flipping channels, they come across some pornographic movies. This makes Maxima curious about human mating customs, much to Amazing Man's surprise and satisfaction.

On the summit of Mount Thunder, Captain Atom tells his fiance Plastique that Monarch told him he is a clone of the original Nathaniel Adam. In the depths of Mount Thunder, Blue Beetle and Booster Gold play capture the flag with Jayna and Zan. Beetle and Booster lose, but Captain Atom wins when Plastique is unaffected by his confession. Firestorm interrupts Atom's tender moment when he crash lands on the mountain.

Issue Notes: The "Next Issue" box in the letter column uses the cover art from issue 15.

Page 2, panel 1
Amazing Man II, Blue Beetle II, Booster Gold (and Skeets), Captain Atom, Firestorm V, and Maxima pose for battle against the Exorians, including Zan and Jayna. Though the battle over the slavery of the Exorian people was resolved in Extreme Justice #15, the question remains regarding ownership of Booster's Mark X exoskeleton, adapted from the Jrxian Flesh-Driver suit.

Page 4, panel 3
Zan and Jayna agree to let Booster keep the suit on the condition that they oversee its use. In essence, in exchange for Booster's continued use of the armor, Zan and Jayna will join Captain Atom's Justice League.

Page 7, panel 1
Captain Atom's Justice League continues their discussion about what the driving focus of their team should be. This discussion was begun in the previous issue, but continues here now that Zan and Jayna have officially joined the team. Blue Beetle takes a leadership role in the discussion, beginning a power shift from Captain Atom that will continue until the title's cancellation following Extreme Justice #18. 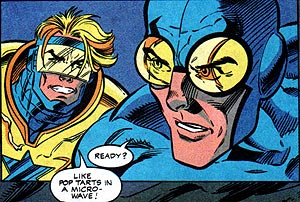 Page 17, panel 2
As Blue Beetle and Booster Gold prepare to engage Zan and Jayna in a training exercise of Capture the Flag, Booster compares his state of readiness to "Pop Tarts in a microwave." Microwave heating instructions on a box of Pop Tarts, a popular breakfast "toaster pastry" made by the cereal company Kellogg's, directs a heating time of just 3 seconds. So Booster is just taking the long way to say that he's ready.

Page 18, panel 1
Together, Zan and Jayna speak in Interlac, their native tongue: "Wonder Twin powers, activate!" Of course, this was what the pair would shout to activate their powers on the Challenge of the Super-Friends television show.

Page 19, panel 3
As Jayna, in the shape of an alien monkey called a "chitchin," captures Booster's flag and wins the game, she screams "gleek!" This is another reference to their television counterparts on Challenge of the Super-Friends. The Wonder Twins of television fame had a "Space Monkey" named Gleek who accompanied them on adventures with the Super Friends.

Boosterrific Review: In an attempt to devote equal time to all of the characters on the Extreme Justice team, the reader is treated to a shotgun assortment of boring scenes of engagement planning, flag football, pornographic movies, alcoholic interventions, underage drinking, and interracial dating. The art equals the story for inconsistency, resulting in the comic book equivalent of a restaurant appetizer sampler: some items are tasty, some less so, but there simply isn't enough to be very filling.