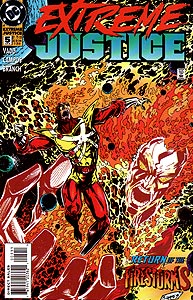 Cover Description: Firestorm V is in the palm of the hand of a gigantic Firestorm IV. (No Booster Gold.)

Issue Summary: The elemental Firestorm Martin Stein returns to Earth to meet with Ronnie Raymond and unintentionally sets Pittsburgh on fire. The Justice League has its hands full saving the city. amazing Man and Blue Beetle save the Bug while Booster Gold saves a busload of citizens.

Stein wants Raymond to merge with him so that he can experience the awe of the cosmos through a more human perspective. This merger will cure Ronnie of his leukemia, but cause him to subjugate his own consciousness to Stein's. Naturally, Raymond doesn't like this proposal and refuses.

Issue Notes: This is the last issue of this series to carry the seal of the Comics Code Authority.

Page 4, panel 2
Amazing Man II, Blue Beetle II, Booster Gold, Captain Atom and Firestorm V are present when Earth's Fire Elemental, Firestorm IV, returns to Earth, accidentally setting Pittsburgh on fire. Firestorm IV is Martin Stein, one half of the gestalt hero Firestorm I. The other half of Firestorm I was Ronnie Raymond, now Firestorm V, having recovered his powers in Extreme Justice #4.

Page 7, panel 3
Rushing to save a bus from the Firestorm IV induced fire, Booster laments that Keanu Reeves is not present. This is a reference to the 1994 movie Speed, which was a box-office surprise that launched the career of Sandra Bullock.

Page 10, panel 2
After saving the passengers on the bus from an explosion, one teenager recognizes Booster and comments that his "new armor really bites!" If the letter columns are indicative of fan sentiment, this is an accurate echo of how most readers viewed Booster's armored suits.

Boosterrific Review: Writer Dan Vado presents a long-overdue, intriguing story of Firestorm vs. Firestorm. Vado has a talent for burying significant, continuity-driven characterization in epic, mindless action scenes, a skill that serves him well in poorly drawn, action-oriented team books such as this one.