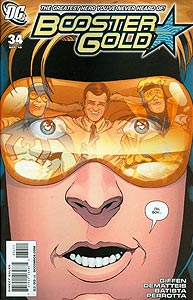 Brief Synopsis: Booster Gold unwittingly finds himself on a mission with the Justice League International.

Page 2, panel 2
Booster Gold and Rip Hunter discuss Rani in Hunter's Arizona Lab. In this issue, all of the art for scenes taking place in the "present" are drawn by Keith Giffen. The cartoonish style that Giffen has chosen for this issue is abstracted and erratic, both are departures from the traditional naturalistic art style of the series. While Giffen's work does help the reader to differentiate between settings, it is far afield from the expected style and is as a result a distraction to the reading experience.

Page 2, panel 4
As Booster references the events of Booster Gold #32, he claims that "the 'butterfly effect' doesn’t work in reverse." The butterfly effect, or the supposition that small initial changes in a system may result in dramatic differences in final outcome, is commonly applied to time travel theories. However, Booster seems to misunderstand that Hunter is concerned that Rani's unnatural presence in the 21st century dramatically alters her history going forward. Or perhaps Booster Gold, himself a displaced person from a future time, believes that his personal history is strong enough evidence against timeline tampering to share Hunter's concern.

Page 3, panel 2
Michelle Carter, appearing for the first time in a Giffen/DeMatteis produced comic book, especially suffers from Giffen's art style. Usually a charismatic and attractive young woman, here Michelle has a receding hairline and the small, sunken eyes of a drug addict. Just what has Michelle been up to for the past two issues?

Page 4, panel 6
June Cleaver was the fictional mother on the classic long-running television show Leave it to Beaver which debuted in 1957. June Cleaver was played by actress Barbara Billingsley.

Page 5, panel 5
Continuing Booster's television references, the "Wayback Machine" was the phonetic name of the time-travel device employed by the fictional Mister Peabody, a genius talking dog featured on Rocky and His Friends beginning in 1959. Mr. Peabody's machine was officially spelled "WABAC machine."

Page 6, panel 1
Booster Gold unexpectedly finds himself face-to-face with his best friend Blue Beetle on the roof of the New York Embassy of the Justice League International. While the exact chronology of this meeting is unspecified, it likely takes place shortly following Mister Miracle, Vol. 2, #8.

Page 7, panel 2
Shemp Howard and Curly-Joe DeRita (note the hyphen) were less commonly known members of The Three Stooges, an American comedy troupe of the early 20th century. Shemp was one of the original members of the trio and Curly-Joe was the last.

Page 7, panel 3
Booster and Beetle's first repossession job, recovering a S.T.A.R. Labs tank from the remnants of the 1000, was seen in Justice League International Annual #2.

Page 8, panel 1
Another television reference? Cheers was a top-rated prime-time (evening) sitcom for most of its original broadcast run on NBC between 1982 and 1993.

Page 10, panel 1
FIRST APPEARANCE: First appearance of P'upik, loyal henchman to Hieronymous. It is common for Giffen/DeMatteis villains to have a loyal sidekick, giving the characters an outlet for often absurd and self-debasing dialogue.

Page 10, panel 6
Beetle's word "Kirboid" is likely an allusion to renowned comic book artist Jack Kirby, known for his incredible work ethic and distinctive style. A "quatloo" is yet another television reference, this time to 1967's Star Trek, a show near and dear to the heart of writer J.M. DeMatteis.

Page 11, panel 2
Booster and Beetle travel to Bailey, VT, to enlist the aid of fellow Leaguer Mister Miracle and his wife, Big Barda.

Page 13, panel 1
The quartet of heroes end up on an alien planet courtesy of a Boom Tube generated by Mister Miracle's New Genesis Mother Box.

Boosterrific Review: An uneven art style and questionable characterization collaborate to this issue's detriment. The biggest asset of the issue is nostalgia, something that seems to always result in a polarized audience even in the best of situations. Between the assets and liabilities, the issue manages to be something less than the sum of its parts.

(6 votes)
ncllcn (Aug. 23, 2010, 15:06:27)
Just got around to this issue... *sigh* ... perhaps giffen should stick to breakdowns and writing if this is what he'll contribute as a penciller to this series. Other then that it was an OK effort nothing stellar. Thought Hunter would have addressed the issue of Rani sooner, perhaps one too many ponies on the chalkboard. Maybe he wants Booster to get all of his parenting mistakes out of the way before Rip comes along. Liked seeing Mr. Miracle and Barda. Hope this picks up in the next issue.
Fatastar (Aug. 12, 2010, 18:06:02)
The art was jarring, especially as it kept switching. I cringed everytime I saw Michelle. There were some good gags, and some evidence of how Booster has changed from the good ol' days, and how everyone in the past completely fails to register these changes (J'onn in the last issue being the exception). I didn't like Rani's interactions with Michelle in this issue, they felt a bit false.
tiggerpete (Aug. 1, 2010, 02:47:06)
honestly, I loved this, except for the art which was too disjointed, I thought the writing was fun, it was great to see Blue and Gold in their former "glory" and with as heavy as JL Generation Lost is, I don't see a problem with this being a more lighthearted title for an arc or two, after all, why else do you get Giffen and Dematteis if not for humor? I'm sure that these JLI hijinks will bear fruit and help out the present day JLI, just give it a chance, and lighten up.
KMD (Jul. 20, 2010, 17:57:39)
The book tried too hard--and the art did not help. I also am a little baffled as to what they plan to do with Michelle and the little girl. This comic was a bit too absurd--it felt like one of the Mr. Miracle comics instead of an old JLI one in some aspects.
Erin (Jul. 19, 2010, 19:25:50)
This issue had a mixture of tones and styles that truly derailed it. The art for the time lab wasn't up to par with the rest, odd characterizations and the shift between seriousness and humor just doesn't make a graceful transition. Michelles' suddenly having motherly instincts of a girl before she even meets her seems to come out of no where. The jokes and insults that Giffin and DeMatteis are known for more often than not fell flat when their trying to use them against the more serious tones of the book. Normally my dislikes of this issue would rank two stars but this issue felt so disjointed for me that I have to give it one. Literally every time I started to enjoy it something took me completely out of the issue. Just curious, why do you think this issue takes place after JLGL #5? I was under the impression it took place right after last issue especially since JLGL#5 is set a week after Max first appeared and this issue has Rani still wearing the outfit Booster found her in.

[BOOSTERRIFIC reply]: As a rule Booster's adventures are assumed to take place in the order in which they are published unless story contents clearly preclude the possibility. I also debated the chronology of this story. After careful consideration, I decided that there is nothing to specifically indicate that this issue takes place immediately after the previous other than the context clue of Rani's outfit. Given the issue's uneven art and the tendecy of characters in a visual medium such as comic books to allways appear to be wearing similar costumes for idenfication purposes, that by itself isn't a strong enough indicator that insufficient time has passed to allow the adventures seen in Justice League: Generation Lost #5 to have occured.

Superman (Jul. 19, 2010, 08:29:58)
This story is cute, but absolutely unnecessary. It distracts from Booster's mission of retrieving proof of Max's existence, which Keith Giffen and J.M. DeMatteis knowingly references here. Booster better get some evidence next issue. Also, it IS a treat to read a take on Booster missing Ted by Giffen and DeMatteis, the authors of their famous friendship, even if this is territory well-plumbed by Geoff Johns and Dan Jurgens, and of course Ted's murder is a wound that will not be healed for Booster in the immediate future, but I'm becoming quite impatient with writers relying on this to drive their story. Move on, I say. The writers should start giving Booster closure now by not making any more of these stories, as DC makes it clear that Ted is dead (for a year or two, anyway, I suppose).