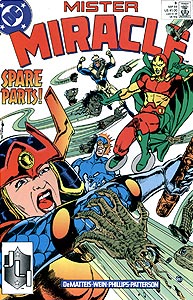 Brief Synopsis: Big Barda, Blue Beetle, Booster Gold, and Mister Miracle have to conclude their battle with Ivo's duplicates and protect their secret identities from the citizens of Bailey, New Hampshire. 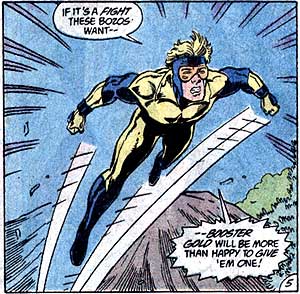 Page 8, panel 1
POWER DOWN: After taking a pounding from the androids, Booster is freed from their grasp by Mister Miracle. Unfortunately for Booster, his Legion Flight Ring has been damaged in the fight, rendering it inoperative. Though it is never discussed, Booster's ring either self-repairs or is repaired by Mister Miracle at the conclusion of the fight.

Page 14, panel 1
Mister Miracle reconfigures the Ivo androids to look like John Lennon, Paul McCartney, George Harrison, and Ringo Starr, collectively known as the rock group the Beatles. The Beatles are arguably the most influential band of the 20th century.

Page 15, panel 1
When Booster asks what happens to the fifth android, Miracle unveils the android he has renamed Zeppo. This is a joke on the frequently heard moniker "the fifth Beatle"; Zeppo Marx has been called "the fifth Marx Brother," sibling comedians who were stars of screen and stage through much of the 20th century. The title of "fifth Beatle" is frequently granted to Pete Best, the group's original drummer and friend who left the band just before it obtained super-stardom. (Miracle seems to think that Zeppo was the "fifth Beatle," but both Booster and Beetle soon correct him.)

Page 17, panel 2
Miracle's neighbors, Kathy and Ed Ferbel drop by to invite him to a movie, "this new Michael Keaton film everybody's talking about." In the summer of 1989, Michael Keaton was starring in the movie Batman. Also note that the name "Ed Ferbel" was recycled. "Eddie Ferbel" was previously used by writer J.M. DeMatteis as the identity of Nomad II in Marvel Comics' Captain America in 1981.

Page 19, panel 2
Miracle asks Booster to leave the Ivo robots with the Salvation Army. The Salvation Army is a Christian organization known worldwide for its charity work. It is common for individuals to make donation of unwanted goods to be redistributed via non-profit thrift stores. Miracle mentions that he would like to hear the androids perform "Rock of Ages," a religious hymn, though it is unclear if he would like to hear it performed by android Ivos or the actual Beatles.

Boosterrific Review: While this is hardly an average super hero action-adventure story, it isn't any better than average as it struggles too hard to be funny.