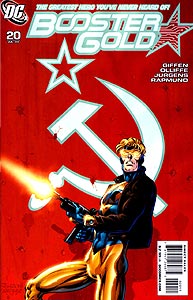 Cover Description: Booster Gold stands before the Hammer and Sickle, symbol of the Soviet Union, firing a submachine gun.

Brief Synopsis: Booster Gold must return to the present to save Rip Hunter.

Issue Notes: This is the first issue of Booster Gold, either volume 1 or 2, in which Skeets does not appear. This should not be a surprise, as the issue was written by Keith Giffen who, despite having written more Booster Gold stories than anyone besides character creator Dan Jurgens, has never included Skeets in any of his stories. (Giffen provided layouts, but not scripts, for the series 52, which did include Skeets.)

Story Notes: The title of this issue, "1952 Pick-Up" is a pun on the title of the first story of this volume of Booster Gold comics, "52 Pick-Up," which was itself a play on Booster's previous series, 52.

Page 1, panel 2
Booster Gold and Rip Hunter are stranded in the time stream in a stalled Time Sphere. (Booster is as surprised as I am that a Time Sphere can stall.) The dialogue balloons in this panel are in error. The final line of the panel should be Rip Hunter's, not Booster's.

Page 2, panel 2
"The Fonz" is Arthur Fonzarelli, the most popular character of the long-running 1970s television show Happy Days, which depicted American life from a time period beginning in the mid 1950s. Fonzarelli was played by actor Henry Winkler and was known for his trademark leather jacket and ability to turn on a jukebox with the snap of his fingers.

Page 2, panel 4
"Tailgunner Joe" was a nickname for U.S. Senator Joseph McCarthy, whose aggressive anti-communist agenda defined the political landscape of America in the early 1950s.

Page 3, panel 1
Traveling to 1952, Booster finds himself lost in the American Southwest. He's looking over a missile base of undisclosed origin or purpose. By 1952, Nevada was the home of the U.S. Air Force's Nellis Air Base and the Nevada Test Site, encompassing several thousand square miles of land off-limits to the public. The infamous and mysterious "Area 51" military base which will gain fame later in the decade is a subsection of this territory.

Page 4, panel 3
FASHION ALERT: Throughout this adventure, Booster is generically referred to as a "cape," a slang term for a costumed hero, despite the fact that Booster hasn't worn a cape in decades (last in Booster Gold, Vol. 1, #16, in 1987!). Capes are synonymous with the heroes of the so-called Golden Age. Every founding member of the Justice Society of America wore a cape save Flash and Hawkman, who wore wings.

Page 4, panel 5
The phrase commonly used in this situation is "oil and water" (to mean two things that don't get along well together), but since most distilled vinegar is approximately 95% water, the same principle applies. Besides, unlike oil and water, oil and vinegar make a great salad dressing.

Page 5, panel 4
The ring that Karin Grace mentions is neither Booster's Legion Flight Ring nor the bell above the gas station's door, but rather the pressure-sensitive chime that alerts a full-service station employee that a car has arrived at the pumps. Booster's Flight Ring is apparently MIA, as it is not seen on his hand throughout his trip to the 1950s.

Page 6, panel 2
The Justice Society of America retired from active duty in 1951 rather than reveal their secret identities to the McCarthy-influenced U.S. Congress House Un-American Activities Committee (as seen in Adventure Comics, Vol.1, #466).

Page 6, panel 4
In Justice League #4, also written by Keith Giffen, Booster Gold explains his stance on hitting women: "where I come from, equality of the sexes is a given, so we can hit anyone."

Page 6, panel 6
BUSTER GOLD: Making a return is the time-honored joke of people getting Booster's name wrong. In the 1950s, apparently "Ace" is the equivalent of the 1980s "Buster." 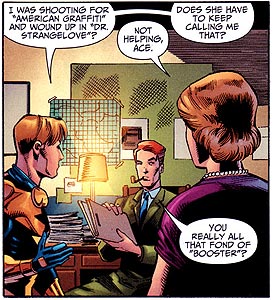 Page 7, panel 3
American Graffiti is a movie released in 1973 that glorifies the youth culture of hot rods and greasers in 1962 California. (Perhaps coincidentally, it features Ron Howard, the actor of the aforementioned Happy Days.) Dr. Strangelove or: How I Learned to Stop Worrying and Love the Bomb, in contrast, is a 1964 movie mocking the military thinking and paranoia of the Cold War era. Neither movie has anything to do directly with the 1950s, and the people to whom Booster is speaking would have no idea what he was talking about.

Page 7, panel 4
The FBI would not accept females as Special Agents until Congress passed laws protecting women's civil rights in the 1970s. The first females entered the modern FBI in 1972 (though there had been limited numbers of female field agents in the earliest days of the FBI prior to J. Edgar Hoover's appointment to head the Bureau of Investigation).

Page 9, panel 3
For blackmail to be effective, the blackmailer has to threaten to expose something that the subject would rather keep private. In this case, it's worth noting that Booster Gold does not have a private identity.

Page 9, panel 6
Wernher Von Braun, perhaps the most influential mind in modern rocket science, was the designer of Germany's V-2 rocket program, used to devastating effect during the later days of World War II. In the chaotic final days of the war, Von Braun was among the highly prized German scientists who were recruited to serve the interests of the United States.

Page 13, panel 2
Rock comments that he stopped smoking on V.E. Day, May 8, 1945, the day of Germany's surrender in World War II. While rumors persist that Sgt. Rock was killed by the final bullet of the war, it would seem that the only thing that died was Rock's cigarette habit.

Page 14, panel 5
Booster's motivation for his subsequent actions is that he doesn't remember it happening. As has been demonstrated in the past, failing to recognize something as history doesn't mean that it is history. According to the Objective Theory of Time Travel, if Booster changes the flow of events that comprises his own history, his memory will also change to recognize the new historical path as truth. For more information on the variations of time-travel theory within the DC Universe, see here.

Page 17, panel 6
The four astronauts depicted show a rather striking resemblance to a marvelous fantastic foursome who would survive a similar rocket incident about 10 years later.

Page 19, panel 5
Again, the dialogue balloons in this panel appear to be in error. The final line of the panel should be Booster's, not Rip Hunter's. This is the second such error in this issue, faults of the letterer and the colorist, but ultimately the editors.

Boosterrific Review: For the first time in this volume of Booster Gold, this story is not part of a larger story arc and no mysterious villain is trying to re-write the course of history. Yet Booster Gold still finds a way to shepherd a potentially wayward timeline into something familiar. Fantastic.

Pat Olliffe returns for a second tour on pencils for Booster Gold, and again his technically-minded style is ideal for the story setting of a 1950s Cold War missile launch site. But this time it is old hand Keith Giffen (born in 1952) who earns the credit for stealing the show by crafting a love letter to the pop culture of a bygone era and still managing to tie it into the previously untold background of DC continuity. As a result, this issue is quite a kick, dig it? (Enemy Ace in issue 16, Sgt. Rock in this issue; Booster Gold is starting to feel like an Our Army At War reunion book!)

(2 votes)
KMD (Dec. 1, 2009, 20:20:48)
Alright. There are some funny moments from Fonz to the Fantastic Four. But.....man....something about this one just did not seem right. It was a bit too slow of a story.
Erin (Oct. 15, 2009, 17:45:20)
While I can appreciate the change in pace a lot of things didn't work for me in this issue. Rip felt off, far more annoyed and snarky with Booster than usual. The reasoning for it also seemed iffy as well. The dialog between Booster and Taskforce X however was a lot of fun to follow. There were a few enjoyable jokes to be found too. But Booster himself went back and forth on being smart and being the idiot. Not knowing who Pushkin was when Dimitri knew Booster well enough to call him Michael and not getting his name right are minor pet peeves of mine. But when you're basing a story around a person Booster knew it does become a little glaring. Otherwise I enjoyed the concept of playing around in an era that frowned on Superheroes. I just found this fill in issue to be a little forgettable.