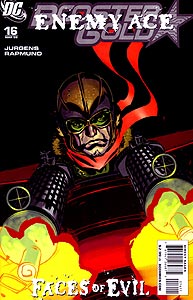 Issue Notes: This issue ties into the "Faces of Evil" event running throughout the DC Universe in issues released in January 2009.

Page 1, panel 1
We join Booster Gold fleeing from a red Fokker Dr.I triplane across the war-ravaged No Man's Land of western Europe in World War I. The pilot of the German tri-plane is none other than Enemy Ace, Hans von Hammer, the most highly regarded fighter ace of the Great War.

Page 2, panel 1
Booster runs past the burning shell of a British tank (possibly a Mark I, commonly regarded as the first combat tank in modern warfare history). The British began using tanks in 1916 to overcome the trenches of dug-in enemy soldiers.

Page 2, panel 2
In a narrative dialogue block, (which never sounds as good as "thought-balloon,") Booster expresses concern about "changing the outcome of the war," revealing an amusing internal conflict. As recently as last issue, Booster was explaining to Michelle that the march of time was intractable, and that time, once "solidified," was impossible to significantly alter. According to his previously expressed theory of time-travel, while Booster could kill an individual soldier, he could not change the outcome of World War I. However, in Booster's defense, he does not know where he is, and he may be playing it safe, since he does not know whether time around him is "solidified" or not. I know I've said this before, but for more information on the variations of time-travel theory within the DC Universe, see here.

Page 5, panel 2
POWER UP: The Time Sphere is demonstrated to have the power to "scramble the recent memory of anyone subjected to it." This is a convenient device that will allow the passengers of the Time Sphere to interact with historical figures without the danger of accidentally damaging historical events.

Page 6, panel 3
FIRST APPEARANCE: Faced with a familiar American soldier (name as yet unrevealed) pointing a German infantry-issue Mauser C-96 pistol at him, Booster is forced to recall his sporting knowledge of the early 20th century. Unfortunately for Booster, Babe Ruth's prodigious ability at-bat wasn't fully recognized until 1918, the final year of the Great War. Ty Cobb was far and away the better known batter of the two players, and would not be surpassed by Ruth until the 1920s.

Page 10, panel 3
POWER DOWN: Booster's power-suit is damaged by the sudden appearance of several time portals. The how's and why's of this technological failure by way of unusual chronal phenomenon is left unexplained.

Page 12, panel 4
Booster displays a previously unknown depth of knowledge of first aid, applying a tourniquet to stop the bleeding from the right arm of the recently shot American soldier.

Page 16, panel 1
Enemy Ace is addressed as "Rittmeister" by a subordinate. Translating to "Calvary Master," this is von Hammer's rank as a squad commander in the German Flying Corps of World War I.

Page 19, panel 1
Despite Booster's refusal to tell von Hammer anything about himself, it would appear that Enemy Ace suspects that Booster is something other than what he pretends to be. It also appears that von Hammer knows more than would be expected about the artifact responsible for Booster's current displacement in time.

Page 19, panel 7
POWER UP: Booster uses common electrical wiring to give his suit a "minimal charge." This is a great improvement over previous power-suits, which ran on nonchargeable, futuristic battery power.

Page 20, panel 3
SPOILER WARNING!: The American private whose arm was saved by by Booster's first aid is revealed to be Cyrus Lord, an ancestor of Maxwell Lord. Reveal

Boosterrific Review: A vast majority of this issue is a stand-alone tale of Booster Gold in World War I. The story started in the previous issue plays out as a subplot starring Goldstar, a pleasant change for a hero's sidekick who to this point has been less relevant than the average supporting character. Unfortunately, this story suffers from too much dues ex machina, damaging the suspension of disbelief required to establish credibility. It does not help that the colors are incredibly one dimensional: war is brown, houses are orange, dungeons are blue, and time is a rainbow. Coloring more sophisticated than this can be found in the original 1960s volume of Our Army at War which first featured fan favorite Enemy Ace. Sadly, this modern appearance of Enemy Ace is squandered on a lackluster story with some below average artwork.

(3 votes)
Justin Garrett Blum (Sep. 18, 2010, 12:34:45)
I'm not as down on this installment as some of you. I was just happy to see that it was a World War I story and not another dystopian future. I think it actually shows Booster's growth as a character that he didn't go all emo over discovering he might have saved Max Lord's grandfather. As he said earlier in the story, "saving a life can never be wrong."
Erin (Aug. 6, 2010, 15:59:14)
It was nice to see Booster visit a time of war. Usually heroes get trapped in War World 2 to the point it becomes cliche, so this was a nice change. The coloring choices were inspired, making Booster seem more out of place. I was expecting the solider to be someone else so the change truly shocked me. A nice issue that can be read by its' self or as part of the arc.
KMD (Dec. 1, 2009, 20:18:21)
A strange issue that really did nothing to move the plot along. I would have thought Booster would have more of a reaction to discovering who the American soldier he had just saved was. A weak issue, especially when one considers that, while WW2 superhero plots retain some interest, nobody cares much for the comic history of the First World War.