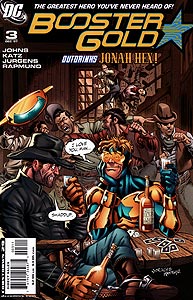 Brief Synopsis: Booster Gold travels to the old west to save Superman's ancestors.

Issue Notes: According to the cover, this issue was published the same week as Countdown #29.

Page 2, panel 2
Booster Gold, Skeets II, and Rip Hunter interrogate Booster's ancestor, Daniel Carter, about the theft of the Supernova suit, as seen in issue #1 of this series. The house that Booster shares with Daniel is destroyed, at least in part by an overzealous Booster himself.

Page 3, panel 2
Second appearance of reporter Rose Levin. She has driven to Daniel Carter's home in what appears to be a blue Porsche to investigate her suspicions that Supernova and Booster Gold are one and the same. This is the first meeting between Rose Levin and Daniel Carter. Hunter suggests that this meeting was supposed to occur earlier in time, though, as usual, he is vague on the specifics.

Page 5, panel 1
As Gold, Skeets, and Hunter travel through the time stream in Hunter's Time Sphere, they witness Young Justice, Anthro (with Mr. Terrific inspired jacket), and the Anti-Monitor.

Page 6, panel 1
Rip Hunter explains that Superman's family ancestry may be in danger. Booster does not seem surprised to learn that Superman was raised by the Kents family. In the pages of 52, Booster seemed unaware that reporter Clark Kent was Superman. Since Hunter does not outright state that the Kents that raised Superman are the family of Clark Kent of Metropolis, it is possible that Booster simply doesn't draw the connection.

Page 6, panel 3
Hunter's story of an alternate Superman raised as Lex Luthor's brother states that Kal-El would be raised by traveling salesman Lionel Luthor. In Superman: Birthright, Lex Luthor hired an actor to play his father "Lionel" in order to enter Smallville society. Lex's real father was killed in an auto accident. Is this new version of Luthor family history the result of the world-changing events of Infinite Crisis? Or is this the Lex Luthor of a different Earth?

Page 9, panel 2
Skeets offers Booster musical selections from Ennio Morricone and Frankie Laine, both famous for their performances for Hollywood western theme-songs. Among many other hits, Morricone conducted the themes to Clint Eastwood's The Good, the Bad, and the Ugly, and Laine sang the theme to Rawhide.

Page 9, panel 5
As noted by Rich Johnston at Bleeding Cool.com, Booster's cowboy costume is suspiciously similar to that worn by the stuffed cowboy doll Woody in the blockbuster Toy Story movies. According to Russ Burlingame of Comic Related.com, this was not intensionally done by issue penciller Dan Jurgens, but may have been colorist Hi-Fi Designs.

Page 10, panel 1
This is the first face-to-face meeting between Booster Gold and scarred Civil War veteran and bounty hunter Jonah Hex. This meeting takes place in Kansas City in the latter part of the nineteenth century, years before Hex would become a time-traveler himself. Hex appears to be holding a Colt Peacemaker revolver, a model not commonly available until the late 1870s.

Page 13, panel 1
Booster Gold and and Jamie Reyes appear in a flashback to the events of Infinite Crisis #5, pages 5-6, during which Booster activates the Blue Beetle's mystic scarab to transform Reyes into Blue Beetle III for the first time within the Batcave.

Page 14, panel 1
Booster and Skeets travel on horseback to find Doctor Jeb Westfield. For unexplained reasons, Skeets, the flying robot, has his own horse.

Page 14, panel 7
FASHION ALERT: A drunken Booster reveals that his original costume's cape, last seen in Booster Gold, Vol. 1, #15, was taken away by Superman in a previously unrevealed battle with a "strong guy... Mammoth or Blackguard or someone." Booster's tale of his misadventures with his cape are similar to reasons not to wear a cape discussed by characters in the Disney/Pixar animated movie The Incredibles.

Page 16, panel 1
SPOILER WARNING!: Booster battles Supernova III for the first time. Supernova III first appeared in issue #1 of this series, when he stole the Supernova suit from Daniel Carter. He has had meetings with both Daniel and Rip Hunter, but this is the first time that he has challenged Booster directly. Reveal

Page 21, panel 1
SPOILER WARNING!: Taking control of the Time Sphere from Rip Hunter, Booster drunkenly pilots the time/space machine into a collision with the Cosmic Treadmill of Flash II and Kid Flash (the future Flash III). The Cosmic Treadmill was an invention of the second Flash, allowing him to harness his speed to travel through time and across the vibrational dissonance separating the pre-Crisis on Infinite Earths multiverse. This is the first meeting between Booster and the second Flash. Reveal

Boosterrific Review: After three issues, the theme of this series is becoming quite clear as writer Geoff Johns is interested in re-exploring (and to some extent re-writing) the history of the DC Universe through the adventures of Booster Gold. This could be trouble for a writer not as well versed in DC continuity as Johns, but he manages to create a credible interaction between Booster Gold and Jonah Hex (who have more in common than one might expect despite having been separated by 600 years of history) while interweaving a plausible relationship with Superman's human ancestors. This is another great issue, but beware that each issue is becoming less accessible to readers who may not be longtime DC Comics readers.

(3 votes)
Grimmy (Apr. 26, 2012, 05:20:32)
In keeping with the series format, Booster must now protect the history of DC's first hero. And he does so in the most unlikely of places (unless you've seen the "Back to the Future" films), the old West. This little tale is a perfect example of how a character driven, humor filled story can still have great significance to the universe at large. Amazingly entertaining, since I'm not a big fan of westerns in general or Jonah Hex in particular.
BoosterPowershot (Oct. 5, 2010, 01:31:43)
Thought it was an okay read, but nothing has really stood out much over time.
KMD (Dec. 1, 2009, 20:05:54)
A fairy average issue. Booster getting sloshed with Jonah Hex is interesting and the bad guys have a pretty innovative scheme to take care of Superman before he even shows up on Earth. Having said that, it is a slow paced issue and that is what stays in my mind the most on this one.