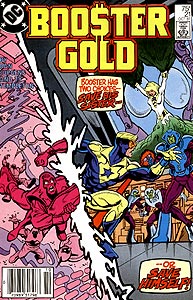 Cover Description: Booster Gold charges through a dimensional barrier, where Skeets is battling three aliens in a red-tinted, limbo-esqe environment, to another world where Michelle (dressed as Goldstar) is being held against her will by three differently costumed aliens.

Brief Synopsis: Booster's search for his missing sister leads him to a planned alien invasion.

Page 2, panel 1
Skeets states that Michelle Carter has "appropriated" the Goldstar uniform, though it is never explained how he comes to this conclusion after the costume was found missing from its closet in the previous issue (Booster Gold, Vol. 1, #20).

Page 5, panel 2
Booster brags that his force field could stop a Sherman tank blast. The U.S. Army's Medium Tank M4, informally dubbed the "Sherman Tank," was the primary tank used by the Allies during World War II. Most Shermans were equipped with a 75 or 76mm gun used in anti-tank roles.

Page 8, panel 2
Cameo appearance of Wonder Girl. Booster speaks to Wonder Girl for the first time. Though he appeared in two issues of Teen Titans, Booster never actually met any of the Titans themselves.

Page 8, panel 4
Booster refuses Wonder Girl's offer to help him with the alien invaders, demonstrating an aversion to share the limelight with even a group as august as the Teen Titans. Despite Booster's previous insistence that he is primarily concerned with recovering his sister, he can not stand the thought of needing assistance to complete the task.

Page 8, panel 5
Booster's dialogue in this panel ["Sheesh! Dimension X! Those Titans should make grade-B films in their spare time!"] is reproduced exactly on page 7, panel 6 of 1987's Superman, Volume 2, #10 as a demonstration of Superman's super-hearing. (Noted by Brian Cronin in his July 6, 2012, "Comic Book Legends Revealed" #374" column at ComicBookResources.com.)

Page 9, panel 4
Trixie and Dirk appear uncommonly close, with Trixie offering to make Dirk dinner at her place. This is a stark change in direction from previous issues in which Trixie preferred to avoid Dirk's company.

Page 10, panel 2
Booster comments that Minneapolis is one of the few towns in the DC Universe not to have its own superheroes. Though the city may be lacking superheroes, it has been home to a few superhero creators, including Dan Jurgens.

Page 11, panel 1
Booster and Skeets fly by the IDS Tower in downtown Minneapolis. The 55-story structure was built in 1973.

Page 13, panel 2
Booster arrives at the Hubert H. Humphrey Metrodome and immediately makes a wisecrack about its "inflatable top." The roof of the Metrodome is the largest Teflon-coated structure in the world (10 acres of fiberglass 1/16 inch thick) and is indeed held aloft by air-pressure alone. The roof has deflated on several notable occasions, though never causing any casualties.

Page 19, panel 1
POWER DOWN: Booster sacrifices his left bracelet to stave off the energy-feeding creatures of the buffer dimension between Earth and Dimension X. Apparently, Booster's power-suit can still function with the energy rods contained in only one of Booster's wristbands.

Page 22, panel 1
As a diversion to prevent Booster from saving his sister, Rangor threatens the lives of 38,000 Twins baseball fans in the Metrodome with a Destructo Agent. The Metrodome can hold a maximum 48,000 fans in its baseball configuration. (The Metrodome is a multi-use facility, and can hold as many as 60,000 fans for football games.)

Boosterrific Review: To the casual reader, this issue will be pretty standard superhero fare. However, it certainly qualifies as the beginning of the darkest chapter of the story of Booster Gold, and is therefore noteworthy in the Booster Gold chronology as greater than the sum of its parts.

This issue masquerades as a straightforward "Booster Gold saves the Earth" story. Ty Templeton is a personal favorite inker, and his work accentuates Jurgens' self-proclaimed "pictures," placing the characterization, dialogue, and action scenes on solid, equal footing. (From this issue forward, Templeton is to be the "regular" inker of the series, though he will only ink half of the 4 remaining issues in this series.) Booster confronts a number of insidious and powerful aliens, yet the real enemy of this story is Booster Gold's hubris. Booster assumes that he is smart, powerful, and resourceful enough to handle whatever threat he encounters. He'll soon learn that he is dead wrong.