“To Cross the Rubicon”

Cover Description: Photographs of Booster Gold and Skeets lie on a table along a photo of Rip Hunter's Time-Sphere, Booster's glove and Legion Flight ring.

Story Notes: Most of Booster Gold's origin as related to Superman by Skeets is told in a third person style by Skeets. Only Booster Carter's interaction with Skeets immediately prior to his theft is detailed in dialogue.

Issue Reprints: This issue has been collected in Showcase Presents: Booster Gold Volume 1.

Page 17, panel 3
Space Museum night watchman Booster Carter is seen detailing his plan to become a super hero in the 25th century to the security robot Skeets. Skeets is understandably dismissive of this apparently underdeveloped plan. 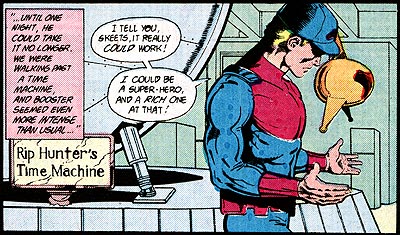 Page 18, panel 5
Booster holds a remote control device that deactivates Skeets, allowing Booster to take him along on his trip to the past in the previously seen Time Sphere. Since the robot Skeets is considered property, and not an autonomous sentient being, this is merely theft, not kidnapping. This is Booster Carter's last witnessed action prior to leaving the 25th century for the 20th.

Boosterrific Review: The Booster Gold origin issue finally answers all of our major questions about DC’s first post-Crisis on Infinite Earths character. And it turns out he's something of a dirtbag.

Wrapped inside the frame story of an interplanetary alien seeking out Superman is Skeets' revelation of Booster's origin story to Superman. Considering the ties Booster's intended origin has to Superman's history (see Secret Origins, Vol. 2, #32 for details), it is only fitting that it be Superman who first learns Booster's story. It is also fitting that Superman condemns him for it. This origin story has none of the cliched "the doctor says momma needs an operation" excuses that will appear in Booster's version of events (revealed later), perhaps because an impartial Skeets is inclined to tell the unvarnished truth. As a result, Skeets depicts Booster as a Shakespearean tragic hero subject to the cardinal flaw of pride, a sin that, while not fatal (yet), will cause Booster suffering well into the future.

The origin revelation and the interplay between Booster Gold and Superman steal this issue, and make it an instant classic. The frame story fares less well, as it is clearly little more than a vehicle to put the stars of the issue together and contrast their personalities. But as usual, Dan Jurgens manages to sprinkle even his mundane plots with enough enjoyable touches (Micronauts-like aliens, interplay with the supporting cast, the introduction to Booster's press room) to make them enjoyable, even on repeat readings.

(2 votes)
BoosterPowershot (Oct. 5, 2010, 00:44:30)
Excellent origin story and issue in general, despite Superman's rather constant stream of annoying putdowns. While I do like Booster's story, I liked it even better with the cliche additions later on- it made the character even more sympathetic, and while cliches are considered tactless, they are cliches for a reason.
KMD (Nov. 11, 2009, 14:28:54)
Great issue. Great origin, great story, great reaction with the caped boyscout and Skeets really starts to come into his own here.