The article is mostly about the CW's upcoming crossover event between its DC-themed television shows, but as originally published, it contained the following passage:

Clearly superproducer Greg Berlanti and writer Marc Guggenheim, teenagers at the time Crisis came out, cared about all this. Their Arrowverse now occupies a significant number of hours on the CW's program grid, pulling stories from all across DC spacetime. And like our own universe, the wider Berlantiverse is expanding. Titans and Doom Patrol are on the streaming service DC Universe—based on DC books but, confusingly, outside Arrowverse continuity. Next year, TV will add Arrowverse shows with Superman, Stargirl, Booster Gold, and Green Lantern.

Did Wired break the news that Booster Gold is coming to the CW in 2020? Not so fast.

The article was later updated, changing the above to

Clearly superproducer Greg Berlanti and writer Marc Guggenheim, teenagers at the time Crisis came out, cared about all this. Their Arrowverse now occupies a significant number of hours on the CW’s program grid, pulling stories from all across DC spacetime. And like our own universe, the wider Berlantiverse is expanding. Titans and Doom Patrol are on the streaming service DC Universe—based on DC books but, confusingly, outside Arrowverse continuity. Next year, TV will add Berlanti shows with Superman, Stargirl, and Green Lantern.

Hmm. Look who's missing from that revision.

The footnote for the article says it was "Updated to clarify that not all the upcoming DC comics-based shows will necessarily be Arrowverse shows." Which obliquely avoids saying anything about why references to Booster Gold were dropped.

So, is a Booster Gold television show coming or not?

I asked around to see if I could confirm any of this (as it relates to Booster) and was told not to trust any of it. Therefore, let's pretend none of this happened and just keep hoping for progress on the Booster Gold The Movie coming to HBO Max rumor that I rumormongered last month.

Herb posted on Dec. 9, 2019 at 1:48 PM
Some of what I read is Booster Gold would be featured in the first season of the anthology show Strange Adventures

Boosterrific [Official Comment] posted on Dec. 9, 2019 at 3:26 PM
I have it on good authority that will NOT (capital letters intentional) be the case.

This Explains So Much

Mark Millar has found the secret to success: think up a killer idea, turn it into a comic mini-series, sell it to Hollywood. That formula has worked for Wanted, Kick-Ass, and Kingsman. Next up: Chrononauts, which hasn't even seen three issues yet.

More than one person has noticed a similarity between Chrononauts protagonist Danny Riley and Booster Gold. Matt Kamen asked Millar about their similarities for Wired Magazine UK.

Kamen: One of Chrononauts' leads, Riley, struck me as a Booster Gold riff -- both blond, narcissistic time travellers. Was that deliberate?

Millar: The funny thing is that Booster Gold came a little too late for me. He came in during the late 80s. I read Justice League way before then, so had no idea who he was. My DC period was from the ages of nine to about eighteen, so I kind of missed him. I dropped DC a little after Crisis on Infinite Earths. I didn't come back apart from dipping in on special projects like Kingdom Come.

So it's just an accident that the two characters are a lot alike? Is that the truth, or just what Millar has to say to stay clear of DC's legal department? Whether the similarities are intentional or not, things could get sticky for DC fans if Chononauts lights up theaters with a character sharing most of Booster's schtick. How likely is DC to make a movie including Booster Gold if it looks to the public like they're cribbing from Mark Millar?

You can read the rest of the article at Wired.co.uk. 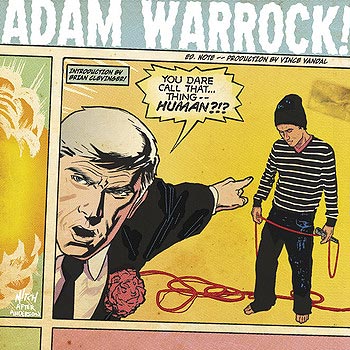 The Adam WarRock album You Dare Call That Thing Human?!? will be released on Monday, February 13. Track number 6 on the album is "Booster Gold," a hip hop song from the first person perspective of a very aggressive and angry Booster Gold. (Warning: Booster curses when he raps. Apparently, that's necessary for establishing "street cred.")

WarRock has firmly established a following among geek culture with his previous albums celebrating television's Firefly and Marvel Comic's Infinity Gauntlet. This new album has already received positive reviews from Newsarama and Wired.

You can pre-order the album as a digital download or compact disc at adamwarrock.com.

Side note, anywhere we can listen to the track?

Boosterrific [Official Comment] posted on Feb. 10, 2012 at 2:20 PM
Nit pickers can preview the track on Amazon.com.

Russ Burlingame posted on Feb. 12, 2012 at 1:16 PM
There's nowhere yet to hear the full track (even though I have--review copy), but the record drops tomorrow.

Boosterrific [Official Comment] posted on Feb. 12, 2012 at 4:13 PM
Quote: "even though I have" sounds like bragging to me, Russ. ;) That said, if you have a link to a review of the track or album, let us know; we love second (and in this case, first) opinions.

Russ Burlingame posted on Feb. 13, 2012 at 10:24 PM
It'll go live in a day or two. When he sent the review copies out he requested that reviews come out after the release of the album, which is different than the way most people like it but probably better suited to digital sales.

Raymond Master's interview with Dan Jurgens was posted last week at the GeekDad blog on Wired.com. The interview was conducted a few weeks ago and as usually the case with Jurgens' interviews, it is not exactly filled with ground-breaking inforamtion. However, it's not without it's value.

[GeekDad:] Aside from his creation, of course, what’s your favorite Booster memory from the early days? And more recently?

[Jurgens:] My favorite memory is probably seeing the first issue on the stands. I was fairly new to the business and very, very raw as a writer. It was quite a hurdle to get the project moving and an even bigger thrill to actually see it through to realization.

But that's not all! An interview with Jurgens and Aaron Lopresti by Poet Mase appeared last week in IGN's series on the New 52. This interview is more recent than GeekDad's and is considerably more focused on Justice League International.

IGN: There was quite a bit of discussion about Wonder Woman's pants on the Justice League cover, but largely lost in the shuffle was the disappearing act pulled by the ninth member of the JLI cover. You said previously that it wasn't Wonder Woman or Donna Troy and that you were intentionally keeping things quiet. Now she's gone. What can you tell us about what happened and why?

Jurgens: This is one of those instances where cover art was prepared before we had finalized all the plans for the first issue's story. We continued to make some adjustments in the cast, shifting some story elements around and that mandated the change.

Note that response doesn't quite answer the question of who that brunette was. That Dan Jurgens: what a tease.

Booster Gold was referenced in a recent post on the Wired.com Geek Dad blog. In fact, a reference to Booster Gold was the opening hook for Corrina Lawson's article "An Open Letter to DC Comics, Part 2: Are You Really Trying to Appeal to New Readers?":

After leading with the above edited image of Rip Hunter's infamous chalkboard, Lawson goes on to make her argument about DC's reboot in part by pointing out the relative obscurity of Elongated Man and Jason Todd. I'm a big Booster booster and no fan of DC's reboot plans, but if those two characters are your definition of obscure, you might not want to lead off your argument with a reference to Booster Gold.

RussBurlingame posted on Jul. 2, 2011 at 5:46 PM
Well, she also thinks that DC should reboot Green Lantern with John Stewart in the lead because "kids know him from the cartoons." Of course, "kids" in that context would have to be fairly old to have much in the way of coherent memories of a show that ended 5 years ago. And Hal is not only headlining a new movie and the best-selling non-Batman title at DC but also has been the preferred version of GL on every animated series since.

And I wouln't say the pre-Rebooted DCU was that hard to follow. I mean, I had a more hard time reading random new Marvel titles with all their Wars (Secret or Hulk)