Sorry, Booster boosters, but Boosterrific.com is no match for an angry mother nature.

A tornado came through my town at midnight last night, doing considerable damage. My family is fine. There have been no deaths reported as I'm typing this — let's hope that stat holds — but cable/Internet service bought it, limiting me to what I can post from my phone.

New posts will resume next week — weather permitting, of course. In the meantime, everyone go hug your families and count your blessings.

UPDATE 2021-03-29: Still no estimate on Internet restoration. The utility company says they're working on it, so I wait as patiently as I can manage.

By the way, I'm sad to report that the stat didn't hold. One man died in the immediate tornado aftermath. Local news says he was trying to make his way through the destruction on foot (as the roads were all blocked with fallen trees) to reach his daughter's house when he had a heart attack.

Tragedy like that sure puts an Internet outage in perspective.

Don't worry about us online fans; we will still be here while you focus on more important things for the near future.

May the Lord provide for you and help you through whatever trials you are facing.

ithildyn posted on Mar. 28, 2021 at 2:25 PM
I am glad to hear you & your loved ones safe. Sorry for your town. Take care and all the time you need to recover from this terrifying ordeal.

Remember Jennifer? She's the one who dropped me a note about Superman: The Man of Tomorrow #7 (2020) that inspired last month's poll. (And, no, I haven't added that one yet. Before I add any digital comics, I have to figure out how I'm going to indicate that they aren't available in the back issue bin of your Local Comic Shop. I haven't had the time for that yet.)

Back to the point, Jennifer is back, and this time she's found *another* Booster Gold appearance in a print comic (from 1988!) that I also didn't have in the Boosterrific database. Take a look at this panel from Power of the Atom #5:

That's definitely an appearance, and I definitely didn't know about it until Jennifer told me. (Because it's only a digital image of Booster on a computer monitor and not the hero himself — Booster appears only on that one panel in the whole comic — I classify this sort of thing as an out-of-continuity appearance, which is where you'll now find it in the lists of appearances.)

The Boosterrific.com database is more complete than ever before! Thanks, Jennifer.

If anyone spots anything else, please let me know.

Have you read Batman Beyond #48 yet? If not, that's your assignment this weekend.

If you don't want to go to your Local Comic Shop for some reason — like, maybe you're still bailing out from a tropical storm that reached hundreds of miles inland like I am — you can always buy the digital comic at comixology.com (assuming your power has been restored).

Judging from the response to last week's poll, most of you are cool with that option.

Last week's poll question: Should the Boosterrific database include comics existing only in digital formats? (28 votes) 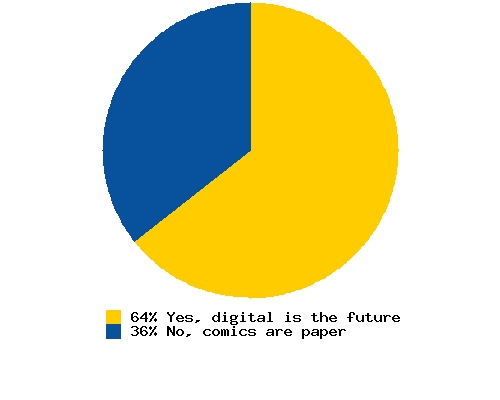 I have to admit that digital comics do have some unique positives. You certainly don't have to worry about a leaking roof or flooded basement — or, if you're on the left coast, a raging forest fire — damaging your digital comic collection. That's worth considering in 2020 and beyond.

My God, It's Full of Tubes

First things first: if Booster Gold appeared in a new comic today, I remain unaware of it. But Batman Beyond #48 is due next week, so we've got that to look forward to.

Second things second: Jennifer wrote me to note that Booster Gold's cameo from Superman: The Man of Tomorrow #7 is not in the Boosterrific database. She's right. It's not.

I mentioned the cameo here on the blog the week it was released back in June, but I never added it to the database. As a reminder, here's what that cameo looks like:

As a matter of tradition, all the books in the Boosterrific database are the printed editions (you know, the old-school kind that you can read without LED screens and batteries). Therefore, I had been waiting for DC to reprint the Digital First Superman: Man of Tomorrow series before adding it to the site. That's what DC did in the past. Until lately, they have combined 2 or more of these digital comics into a single floppy available at your Local Comic Shop.

But 2020 is interesting times, and DC isn't the same company it was at the start of the year. They have yet to announce any printed editions of Superman: Man of Tomorrow. It might come eventually as a trade collection of the whole series, but these days who can tell?

So the question becomes: should I change the way I've done things in the past to start adding individual issues of digital exclusive content? Or should I hold fast to my old fashioned concepts of what a "real" comic book is? What do you think?

An Affair to Remember

C.M. spotted an omission here on Boosterrific.com that they thought needed to be brought to my attention:

I noticed that for your entry under "Other Media" for Justice League Unlimited "The Greatest Story Never Told", there wasn't a mention of the characters that Booster meets in the story. Particularly Tracy Simmons, as she becomes Booster's date at the end of the episode.

First of all, thanks for noticing! I've put a lot of work into Boosterrific.com, and it's always good to hear that someone has found some value in it.

More importantly, you're right. I didn't mention Tracy in my synopsis of that episode. I omitted that data on purpose, partly because I was interested in avoiding spoilers, and partly because I was interested in strictly limiting the information in the Other Media summaries to just a couple of sentences at most. Maybe I was wrong to make that decision.

Boosterrific.com was created for and remains dedicated to tracking the adventures of Booster Gold that appear in comic books published by DC Comics, in other words, the adventures of Booster Gold in the traditional DC Universe (DCU). I decided to track appearances in other media, like television and video games in an effort to provide a comprehensive guide of the where our hero can be found.

However, I don't always have the same interest in other media as I have for comic books, so I have rarely made the effort to catalog Booster's Other Media appearances as thoroughly as I do comics. That may be a bit of a disservice to Booster and his fans, but I have to draw the line somewhere, and that's where it is.

If you're interested in more information about Booster's participation in the excellent Justice League Unlimited episodes, I recommend the DCAU Wiki (dcau.fandom.com) which has done a great job covering them, including "The Greatest Story Never Told."

So apologies to the highly esteemed S.T.A.R. Labs physicist Dr. Tracy Simmons, who probably always should have been mentioned in my my Other Media post for "The Greatest Story Never Told." Maybe one of these days I'll make it up for it with a spotlight post here on the blog as the only DC-sanctioned outside-of-comics romantic interest for Booster Gold.

Thanks for your constructive criticism, C.M. Together, we'll make Boosterrific.com better!

Boosterrific [Official Comment] posted on Oct. 2, 2020 at 10:20 PM
Thanks, Shawn. That's pretty much exactly the sort of thing I wouldn't find myself.