Russ Burlingame and Dan Jurgens have developed a real rapport over the course of the past seven years of "Gold Exchange" columns. That relationship was renewed last week as the pair discussed Convergence Booster Gold #1:

Burlingame: Do you have in your head an explanation for the All-Star Western thing? Was that taking place on Telos?

Dan Jurgens: Whenever it gets into a case like that, I always want to avoid providing that explanation for every little thing that happened under the sun. I felt very comfortable addressing what the Booster Gold Five Years Later book [Booster Gold: Futures End] was because it just came out last summer. To go beyond that? I don't know how much the fans know and I wanted to make this as accessible as possible to people who were picking up an issue of Booster Gold for the first time. So it was streamlining it more.

In my head, I've always thought of it this way, and that is after Justice League International, Booster got kind of caught in a time vortex where he was bouncing through time. That would have included the events of the Justice League International Annual. And then from there, he kind of appeared in Booster Gold five years later. It's almost as if he could have gone straight to Telos after all that happened. That's just a classic case where rather than break things down, you take things at face value. You saw Booster in Justice League International and then you saw him in All-Star Western and then all of a sudden in the Five Years Later book, one could say that yeah, he bounced through time and then ended up on Telos.

I don't blame Jurgens for A.R.G.U.S. Booster in Justice League International Annual or the character's unexplained appearance in All-Star Western. After all, Jurgens didn't write those books. But you know it's been a bad couple of years for a character when even his creator can't make any sense of it.

Anyway, you can and should read the rest of the interview at ComicBook.com.

Dan Jurgens Explains It All

On Monday, TwinGalaxiesLive posted an interview with Dan Jurgesn about Convergence that finally explains some of the shenanigans of Booster Gold: Futures End.

Starting at 1:54 into the above video, Jurgens tells us that there is no time travel in Futures End: Booster Gold, just travel through space, as everything takes place on the sentient planet introduced in Convergence.

Does this mean that Jonah Hex, who also appeared to travel through time with Booster in his own series, is also on that planet? Is the older Booster in that issue not the Booster we saw return from Flashpoint, but the older "Supernova" Booster from Time Masters: Vanishing Point? Curiouser and curiouser.

Thanks to Jacqueline G. Lopez and Matthew Hiscox and The Comic Book Show at TwinGalaxiesLive.com for this information.

osyrus68 posted on Apr. 11, 2015 at 1:53 AM
uuuuhhhhhhhh Did Dan just say in essence that Booster Gold exists outside of time and space...just like the big baddy, Brainiac?? That BOOSTER is the only "person" privy to the knowledge of the universe (and DC is only putting a 2 part story line for him in convergence?!?!?!?). and on that bombshell.....goodnight.

Boosterrific [Official Comment] posted on Apr. 11, 2015 at 2:55 AM
Hey, just think of Booster like the Spectre: so powerful, DC has to bend over backwards to explain why he's NOT in these crossovers.

Grimmy posted on Apr. 11, 2015 at 4:23 AM
Guess I need to re-read Futures End: Booster Gold. Thanks Dan for the new perspective. BTW, I believe Jonah Hex is slated to appear in Convergence.

The Blot posted on Apr. 17, 2015 at 12:02 AM
So interesting! What is so frustrating is that clearly someone at DC finds Booster important. It's why they continue to attach him to Flashpoint, Futures End and Convergence, but they never actually follow up on these dangling threads. That and they refuse to give us a new BG ongoing series. Heck at this point I'd settle for a mini-series that's more than 2 issues.

That was a small part of the teaser poster for Futures End. Tim drake went on to play a huge part in the series. Booster Gold? Not so much. Let's recap:

We learned in the first issue of the series that thirty-five years in the future of the New 52 Universe, Brother Eye has taken over the world. Many heroes and villains have been corrupted into becoming Brother Eye's agents, including Booster Gold. 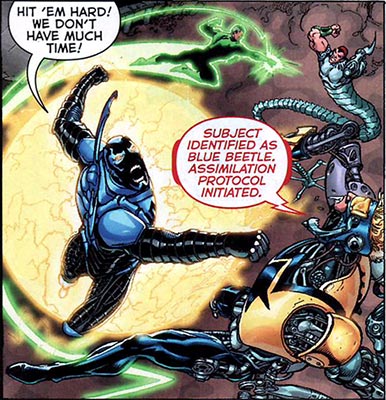 Forty-eight issues later, uh, not much changed. Despite the tease, the only Booster Gold we really got during Futures End was a confusing sidebar that had nothing to do with the Futures End plot, but rather set the stage for the next mega-crossover event.

That's definitely not what anyone would have guessed when we saw Booster Gold in that teaser last year. Here's hoping that Convergence treats Booster Gold a little better.

Convergence #1 and the first wave of mini-series are in stores today.

Bob posted on Apr. 9, 2015 at 12:33 PM
I really see the opportunity for Booster being huge in convergence. He was essentially in the time stream at the end of it, meaning that the pre-52 booster may still exist, and with the pre 52 booster being there when the multiverse changed it gives puts him in a unique position. Of course it could mean absolutely nothing and he'll get a camio as also being there.

Wow! When Vaneta Rogers interviewed Dan Jurgens for Newsarama.com on Monday, she covered the bases!

Newsarama: Dan, who is the star of the Convergence: Booster Gold issues? Is it New 52 Booster Gold, or the older Booster?

Dan Jurgens: The only thing better than one Booster is two Boosters! You'll see both of them here.

Nrama: So does this pick up where we left off in the Futures End: Booster Gold issue from September? Or how does it relate to what we saw in that issue?

Jurgens: Yeah, it picks up not long after the Futures End: Booster Gold issue. They're directly plugged into what's happening here, so it was a natural story progression.

Those are just the first two questions. Rogers goes on to cover what other characters will be appearing in the mini-series, how it ends, and where we might see Booster Gold next. It's far more informative than a typical DC solicitation.

Read the whole interview at Newsarama.com!

The latest installment of The New Adventures of Blue and Gold (or, as some people call it, Justice League 3000 #14) is released today. The preview of the issue at A.V. Club gives the impression that this will be a very Ice-heavy issue with a hint of Fire. That sounds like something I want to read.

(By the way, the rumor of Justice League 3000's demise has been greatly exaggerated. After Convergence, the book will be reborn as Justice League 3001. Whether Booster Gold survives that transition remains to be seen, but I'm betting yes).

And while you're supporting your Local Comic Shop, consider picking up Futures End #41. Booster Gold can be found in the issue preview seen on Crave Online. While it's probably just a brief cameo, you don't want a hole in your Booster Gold collection, do you? (Thanks to MetalWoman for the spot.)