For the purposes of this website, Todd Klein is known as the man who created the original Booster Gold title logo. In addition to being a great letterer — he's perhaps best known for his work on Neil Gaiman's Sandman — Klein is also a comics fan and historian.

Over on his blog, kleinletters.com, Klein's latest history project involves the 1980s occupants of the DC Comics offices at 666 5th Avenue, New York. This was the time period that Booster Gold was born, and our hero makes an occasional cameo appearance as Klein discusses many of the editors staff artists involved in the production of comics of the era. 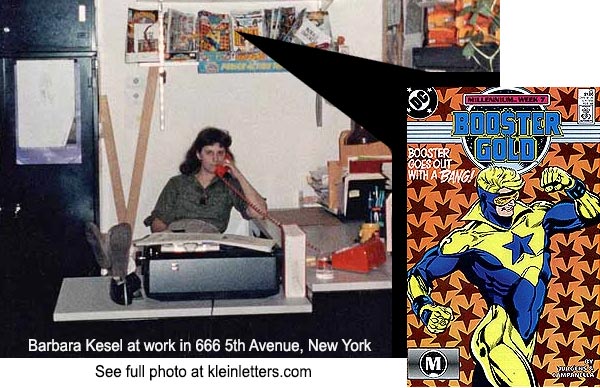 In the photo above, you'll see Booster Gold #25 on the shelf behind DC editor Barbara Kesel. Other photos in the 6-part article identify the offices of Booster Gold editors Janice Race and Alan Gold. You'll even find a pic of young Dan Jurgens with his fellow Superman writers.

If you have any interest in the history of DC Comics, you'll find the whole article at kleinletters.com.

Scheduled for release today is a $40 hardcover collection of work by Ivan Reis titled Graphic Ink: The DC Comics Art of Ivan Reis, including "the complete Blackest Night." Since Booster Gold made token appearances in the first and last issues of that mini-series, we can expect to see him in this.

It looks like the only Booster we've been seeing recently in the DCU is in reprints. Is that better than nothing? I'm not sure.

Out suspicions were confirmed earlier this week that DC Comics had near-record sales in September with its Forever Evil mini-series and tie-ins. For those of you who hate event books, remember this. Yes, they are usually mediocre, editorially driven stories. But boy howdy, do they sell!

ComiChron.com reports that DC Comics sold over 4 million copies of 129 different comics in September 2013. That made September sales nearly as good as those in the first week of their "New 52" initiative back in October 2011.

The good news is that DC looks healthy and wealthy, at least for the time being. Keep in mind that DC needs to stay in business if we're ever to see our Booster Gold in action again.

The bad news is that they sold all those books without so much as a mention of Booster Gold. With everything going so well (financially) right now at DC, we can't expect the company to feel any pressure to return Booster to action anytime soon.