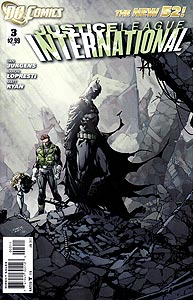 Brief Synopsis: The Justice League International splits into teams to battle Signalmen across the globe.

Issue Summary: From a van outside the ruins of the Hall of Justice in Washington D.C., Andre Briggs and Emerson Esposito follow the exploits of Booster Gold and Batman in Peru. Booster has devised a plan to grant Batman access to the Peruvian Signalman's underground headquarters.

Elsewhere around the globe, the Justice League International has paired off to repeat the plan on other Signalmen. In Russia, Rocket Red and Ice discuss Rocket Red's affection for Fire. In South Africa, Fire and Vixen bond despite their differences. In Canada, August General in Iron and Godiva struggle against their own power limitations and overwhelming numbers of mole men.

Soon Booster Gold joins Batman in the Signalman's lair. Booster assaults the mole men defending the area as Batman attempts to decipher the alien technology and discern the Signalmen's real motives. But Booster can only hold the line for so long before Batman is overwhelmed.

Having heard that a large spacecraft is in orbit around the Earth, Guy Gardner investigates and is ambushed by Peraxxus.

Page 2, panel 1
Booster Gold is back in Peru with Batman. Their Justice League International teammates are spread throughout the globe confronting the many Signalmen.

Page 4, panel 1
Batman praises Booster's success at distracting the Signalman. Ever since Flashpoint, Batman has been very supportive. Did something change in his history to make him less dour?

Page 5, panel 3
FASHION ALERT: The trim on Booster Gold's cowl is colored blue, not gold. This mistake is repeated in every appearance of Booster Gold in this issue. Three months into DC's New 52 experiment, and the colorists and editors still don't seem to understand Jim Lee's new character models.

Page 8, panel 1
Andre Briggs tries but fails to reach Booster Gold via radio from Washington, D.C, yet Booster seems to be able to communicate with Batman just fine. Perhaps the Signalman is blocking Booster's communication with the rest of the world?

Page 15, panel 4
Booster joins Batman inside the Peruvian Signalman's underground headquarters. Apparently, the Signalman did not need much distracting.

Page 18, panel 3
Despite Batman's encouragement, Booster is unable to prevent Batman from being overrun by the rock men.

Boosterrific Review: This issue is far too decompressed to be satisfying. Each hero gets about three pages of attention, and too much of that time is spent on repetitive situations allowing only minimal character development. Nothing significant is learned about the overall plot . (Signalmen are aliens? No one saw that coming in issue 1.) Only at issue 3, it seems awfully early in the life of this book to be treading water like this.

(1 vote)
CanadianFan (Nov. 4, 2011, 21:21:32)
While I agree you can't put much character development into just a few pages, I find it's up to the reader on *how* they interpret it. Personally, I find the constant banter between Bruce and Mike from the previous issues ties in here and proves that the two know more about each other than they'd probably let any one else know, minus their respective families, the Bats and, I'm assuming they are around, the Time Masters. The Ice/Rocket scenes we saw show a budding friendship. Both are Northerners and have an investment in Bea, Ice his her best-friend (as seems is still apparent in DCnU) while Rocket seems interested in her (something carried over from JLI:GL). August and Godiva seemed to be an interesting pair up as well. Not only were they in Canada (Booster+appearing in the same books as Canada is being mentioned are going up, twice in recent issues, and he's apparently from my home country now, sweet! hah) but I find the character of August to be growing on me. I've never known much about him, but since he supported Mike, and now seems to be something of a caring father to Godiva, I find myself wanting to learn more about him. To me, the only pairing I found to not to give me a clue on how they will turn out as friends was Vixen and Fire. That spot was boring. On a side note, a theory of mine I've shared with friends and they could see it happening; Brigg's is actually Max Lord using his Mind Control powers. But, all in all, I found this issue to be a bit slower than I'd have liked, but it still was a good read. Again, what you read is always an opening into making your own interpretations. If someone finds there not to be a good amount of development between two people, it becomes their job to see where it could go and keep a heavy eye on the pair.